On a recent day, 32-year-old Lee Ju-hyun received a KakaoTalk message. It read: “Congratulations on your wedding.”

Paying cash for or at major celebratory events, such as marriages or the first birthday of a child, is a major Korean tradition. Now the tradition is going high-tech.

The KakaoTalk message said Lee could use the digital money online or offline or could wire it to another person.

“I sent my wedding invitation in a KakaoTalk group chat and one of my friends sent the money saying she wouldn’t be able to attend due to an overseas business trip,” Lee said.

“Although I use the messenger quite often, it was my first time receiving such payment via messenger app. That day, I received the same payments through KakaoTalk from four other people.”

She said while it still felt unfamiliar, it was a fresh experience adding that although she personally hasn’t used such a service, one thing was certain: It’s convenient.

Choi Kwang-rae, a 26-year-old college senior, couldn’t attend a friend’s wedding as he was taking a job exam that same day.

After congratulating his friend over the phone, he sent 70,000 won through KakaoTalk.

With the rise of fintech, most people, regardless of age, actually agree with the fact that the culture of offering money for celebrations has changed.

In a survey conducted by the JoongAng Ilbo and the Seoul Metropolitan Government between April 15 and 17, 29.7 percent said they agree that fintech has changed the way people pay for celebratory events or for funerals.

Age didn’t matter much, as 36.8 percent of those who were in their 20s or younger said fintech has changed the way people pay for such events, while 36.4 percent of those 60 years old or older said the same.

“Paying for such celebratory events or for funerals has become really convenient with the development of fintech,” said 28 year-old Jang Seri. “In the past, if I wanted to send money to another person, I would have had to ask for that person’s bank account number. But today, such inconveniences have disappeared as now I can simply wire it through the messenger.”

The mobile payment market, led by Viva Republica and KakaoPay, has been growing rapidly in the last couple of years. The mobile payment services have reported a rise in use in spring and fall when there are a lot of weddings concentrated.

KakaoPay in May last year experienced a 16 percent increase in mobile payments compared to the previous month.

A KakaoPay manager said the company does not have a separate study on why those transactions are made. But it added that the surge in May was most likely because it is the month when a lot of marriage ceremonies are held.

In February 2017, the company created a digital envelope that can be used for sending money for celebratory or funeral purposes.

Shinhan Card joined in on this trend as it started a service in September where people can transfer money for events with their credit card.

The credit card companies said, for the time being, they will not charge for the service as it is a new innovation.

Older people are getting in on the trend. 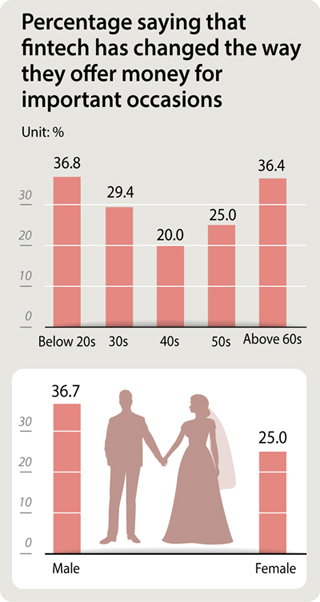 Those in their 50s and 60s are also joining as the use of fintech becomes more widespread.

A 62-year-old also surnamed Kim said he doesn’t feel burdened by mobile wedding invitations or even payments that are made via mobile messengers.

“I don’t feel any resistance when receiving a congratulatory wedding payment via mobile messenger or take it as a lack of sincerity,” Kim said.

He said when he receives a wedding invitation face-to-face, it feels more like receiving a bill.

“It is burdensome since it feels as though I would have to attend the wedding even when I don’t have a close relationship with that person,” Kim said. “But when receiving the mobile invitation, there’s less pressure.”

Sometimes such payments are seen as insincere.

“I felt awkward in receiving it via KakaoTalk since it’s not a gift,” Kim said. “It didn’t feel natural for me to send a message saying I received the payment.”

Han Bit-na, 28, agreed, saying it felt more sincere for people to deliver the payment to the mourning family at the funeral.

“I don’t think, even with the rapid development of technology, the culture of paying the family celebrating or mourning would change,” Han said.

Choi Kwang-rae, a 26 year-old college senior, said his father has told him that it is impolite to send congratulatory payments through KakaoTalk.

“Fintech has already become one way of delivering such money for celebratory or funeral payments,” said Song Da-young, a professor in the department of social welfare at Incheon National University. “However, this means that the way we deliver such news and the way we receive and pay for such events have become simplified, but the culture itself has not been transformed, including the way we interact with one another.”

There are those trying to change this culture as well.

The service allows the bride and groom to create a digital wedding invitation with a list of gifts that they want and where they are sold. So instead of getting money from wedding guests, they get presents that they actually need.

The two start-up founders said that younger people are more accepting of the funding and sponsorship culture than older people. They said they would like to change the culture of paying in cash for attending such ceremonies.