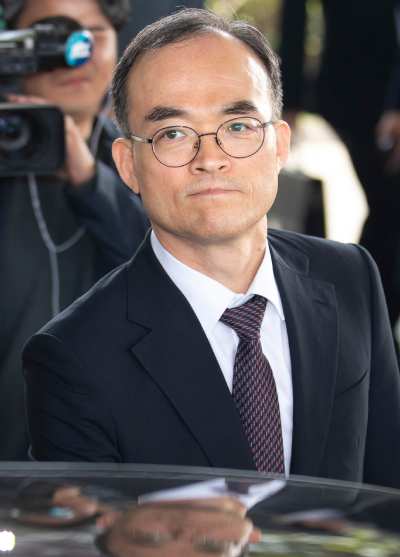 Prosecutor General Moon Moo-il said Saturday that there are no circumstances under which the protection of a citizen’s basic rights should be undermined, affirming his opposition to the Blue House-led reform plans of the criminal justice system.

Moon made the remark to local reporters as he arrived at Incheon International Airport on Saturday morning after cutting short an overseas business trip.

Moon, the nation’s top prosecutor, was on a four-leg tour when he decided to skip his last stop to return to Korea after the National Assembly fast-tracked bills on judicial reform on April 29.

During his overseas trip last Wednesday, Moon voiced his opposition to the judicial reform bills in an official statement, saying it went “against the democratic principle of checks and balances.”

Moon particularly complained that the bills are awarding exclusive powers - a combination of primary investigation rights without supervision and intelligence authority - to the police.

President Moon Jae-in has long pushed for judicial reform in an attempt to curb prosecutors’ powers by partially redirecting them to the police. After months of parliamentary wrangling, Moon’s ruling Democratic Party managed to form an alliance with three minor opposition parties to fast-track related bills to ensure they reach the floor for a general vote without being blocked by opposing lawmakers.

The top prosecutor said last Saturday at the airport that he basically agrees with “the need for prosecutors to change their style of work,” but pointed out that the protection of people’s basic rights must not be weakened, implying that the current judicial reform plan would do just that by redistributing prosecutors’ investigative powers to police.

Regarding Justice Minister Park Sang-ki’s comment that prosecutors should “humbly and earnestly” prepare for a redistribution of investigative powers if they don’t want to be criticized by the public for “organizational egoism,” Moon said Saturday he thinks Park is “right,” and that Park probably made the comment from the viewpoint of his own circumstances. Moon’s answer was seen by experts as a cautious attempt not to engage in a public brawl with Park.

During a phone interview with the JoongAng Ilbo last Friday, Moon said the fast-tracked judicial reform bills “go against democracy” and “will do no good to the public.”

Moon continued he was planning to hold a meeting with top officials within the prosecution once he returns to Korea and decide whether he’d hold a press conference to relay his thoughts on the reform bills in more detail.

Asked whether he was willing to threaten resignation to push the government and the National Assembly to not stick with its current reform plans, Moon vaguely said that what was more crucial now was that the police and prosecution revise their investigative powers “in a correct manner.” Moon’s term is expected to end on July 25.