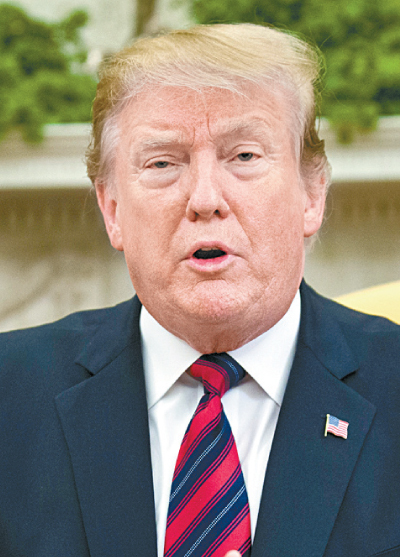 U.S. President Donald Trump speaks to reporters in the Oval Office of the White House on Friday. [AP/YONHAP]

U.S. President Donald Trump showed a measured reaction to Pyongyang’s sudden test firing of several military projectiles on Saturday, saying he believed North Korean leader Kim Jong-un would not renege on his promise to stop nuclear and missile tests while in dialogue with Washington.

Thirteen hours after the launches were detected from the North’s eastern coast, Trump tweeted that “anything in this very interesting world is possible,” but that he believed Kim would not do anything to “interfere or end” his country’s “great economic potential” by breaking his promise.

“Deal will happen!” Trump added, leaving open the possibility of a resolution to the stagnant denuclearization negotiations between the two countries.

The president’s uncharacteristically composed reaction stands in sharp contrast to the strong - and often derisive - condemnations he issued towards Kim when the North last conducted ballistic missile tests in the latter half of 2017.

According to a source cited by the online news outlet Vox, Trump was initially “pissed off” after receiving reports on the North Korean tests, apparently out of spite that Kim had breached their trust.

Senior aides, however, urged him “not to tweet anything” until he had a phone conversation with South Korean President Moon Jae-in on the issue.

By intervening to contain Trump’s temper, White House aides may have sidestepped a return to the days of “fire and fury,” words tweeted by the president in early 2018 after hearing that the North may have acquired the capacity to launch its nukes toward the continental United States.

Throughout late 2017, Washington and Pyongyang exchanged a series of barbs that at one point fueled speculation that the Trump administration may be considering a pre-emptive attack on the North’s nuclear program, but those tensions rapidly melted away once Kim began his charm offensive toward the South with a historic first summit with Moon in April 2018.

Seoul played a pivotal role in brokering the first meeting between Kim and Trump in Singapore last June, at which Kim reportedly made a promise not to test any more nukes or missiles. Since then, the president has touted his engagement drive with the North as an outstanding success, repeatedly stressing that a deal would be reached to disarm the country even after no such agreement was reached at a failed second summit in Hanoi, Vietnam, last February.

Trump’s balanced response on Saturday could suggest he has become beholden to his ambitious pledge to denuclearize the world’s most secretive country, or at least that Kim’s intention with the weapons testing to coerce the United States into moving forward with the negotiations could, in part, be working.

A parallel and also noticeably calm reaction to the North’s new tests on Saturday was also seen from South Korea, where the Moon administration has resolutely pursued a diplomatic approach with Pyongyang even as its officials quibbled with Washington over the sanctions issue.

In a statement released on Saturday, Blue House spokeswoman Ko Min-jung said the government expressed “serious concern” over the fact that the North’s recent tests violated an inter-Korean military agreement signed at the third summit between Moon and Kim in September, and called on the North to “halt any actions raising military tensions on the Korean Peninsula” as per that promise.

“Regarding the fact that these actions have taken place during a lull in the denuclearization negotiations, [we] hope the North will actively engage in efforts to resume dialogue,” Ko added.

South Korean Foreign Minister Kang Kyung-wha and U.S. Secretary of State Mike Pompeo also agreed over the phone to coordinate and “carefully deal” with the situation on Saturday. Stephen Biegun, the U.S. special representative on North Korea, is set to visit Seoul on Thursday to discuss a plan for a “final and fully verified denuclearization” of North Korea, according to the State Department last Friday.

The North’s latest actions may in part also be prompted by a set of joint land, air and sea drills between Seoul and Washington that kicked off on Saturday, something which Pyongyang condemned as “preparations for war” in spite of the fact that the exercises had been scaled back by the allies precisely in order to diminish tensions.

While Saturday’s tests from the North may have deliberately fallen short of a full-blown ballistic missile launch to avoid jeopardizing the diplomatic process, there is no guarantee that Pyongyang won’t follow through on a threat it issued Tuesday in which it promised an “undesired consequence” if Washington does not change its stance in the discussions by the end of this year.