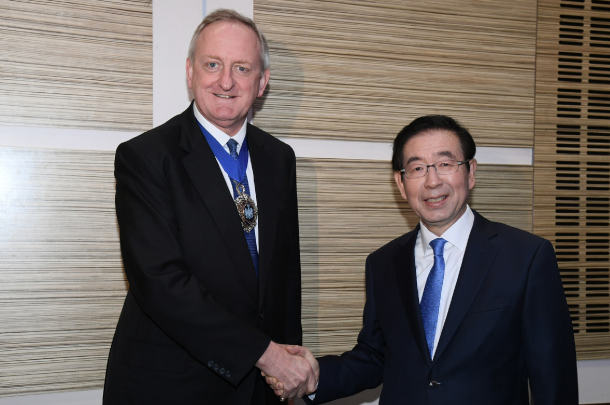 Peter Estlin, lord mayor of the City of London, left, and Seoul Mayor Park Won-soon, discuss cooperation among financial services corporations that make up the British-South Korea FinTech Bridge, at a conference in City of London on Friday. [SEOUL METROPOLITAN GOVERNMENT]

LONDON - The ongoing state of Brexit in Britain is prompting some British companies to look for markets outside of Europe, including Korea.

“What we’ve noticed is that our companies are looking at Europe but also much more now beyond Europe - including Korea, Japan, the United States,” said Gerard Grech, CEO of Tech Nation, in his meeting with Seoul Mayor Park Won-soon on Friday. “That is what happens when something like Brexit happens. Entrepreneurs are more ambitious about markets.”

Mayor Park visited London from Thursday through Sunday as part of his trip to Europe and the Middle East to bridge city-to-city partnerships on fintech and start-up innovation, as well as on environmental sustainability.

Park visited Tech Nation on Friday afternoon as part of his tour of the Shoreditch district of London to witness first-hand the start-up scene of the city.

“Brexit has happened for good and bad reasons, I would say, but the basic premise of our organization is to make sure that people are successful in their own cities,” Grech said. “We make them successful in their own city and they will be local role models for their own local population. These entrepreneurs are very ambitious and they need to plug in with other people who are just as ambitious. Sometimes those cities lack the support for those types of people.”

This is where Seoul can come into play, Park said.

Earlier in the day, the Seoul mayor presented his case to some 130 representatives of financial services corporations of Britain, inviting them to come and invest in Korea.

“The Seoul Metropolitan Government is making efforts to further develop particularly the fintech industry,” Park said, while addressing the audience at the “Bringing Financial Services to Seoul” conference at the Leonardo Royal Hotel London St. Paul’s.

“The Seoul Metropolitan Government is also operating a $1 billion ‘Seoul Innovation Growth Fund’ and investing in promising start-ups,” he added. “In addition, the Korean government decided to put in place a regulatory sandbox to facilitate the activities of start-ups […] Please use Seoul as your foothold into the Asian market.”

The city government of Seoul provides funding for international financial services companies that meet certain requirements to support them in establishing a branch office in Seoul and in hiring and training employees.

It recently designated an area in Yeouido - home to 35 percent of the country’s financial services companies - as a hub for fintech companies. Financial services companies with more than four employees that are able to attract more than 100-million-won ($85,886) worth of investment and make at least 1 million won in annual sales, can apply for a free space at the hub through the Seoul city government.

The City of London - one of 33 local government districts of the Greater London - is home to more than 5,000 financial services companies. The district currently hosts some 30 South Korean firms generating about ￡200 million ($263.5 million) annually, according to the local government.

“I visited Seoul in February and part of my visit was to look at how we can increase the amount of traffic on the fintech bridge between Korea and the U.K.,” said Peter Estlin, lord mayor of the City of London. “London is regarded as a global hub with 77,000 people in the fintech industry, generating about ￡7 billion of revenue. It is a market that is clearly an international market, one that we are looking to expand.”

Friday was also the last day of Britain’s FinTech Week, a weeklong series of events and discussions on the financial market and related issues such as the Brexit, artificial intelligence (AI), blockchain, cyber security and investment.

Park spoke with a number of employees at British fintech companies interested in entering the Seoul market, including World First, TransferWise and Revolut.

“We’re hoping to set up our business in Seoul,” said Daniel Howe, country manager for Europe, the Middle East and Africa at World First, at the conference on Friday. “We have been doing some work with the Korean customs and are excited about how today’s conversation will go.”

In the afternoon, Park and his delegation also visited MedCity, a medical research hub at the Imperial College London with an initiative to encourage start-up experiments on the local community level and to fund research and development partnership among researchers and corporations.

The city government of Seoul is also building a similar private-public research and development center for medicine and health care, to be called Seoul Biohub, in Dongdaemun District, eastern Seoul.