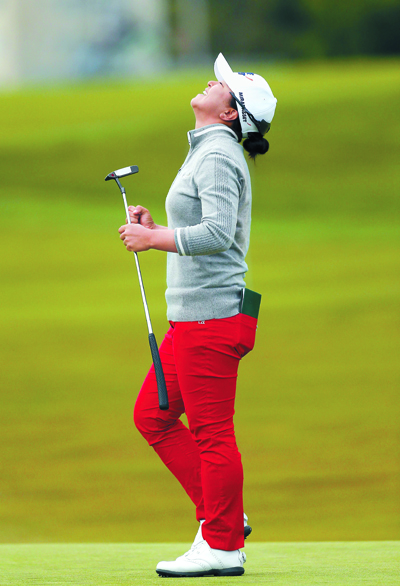 Kim Sei-young finally picked up her first win of the season at the LPGA Mediheal Championship by winning a three-way playoff at Lake Merced Golf Club in Daly City, California, on Sunday. 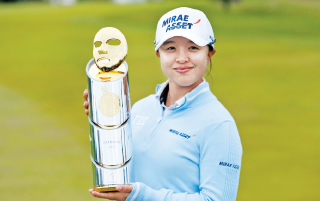 Although Kim was the overnight leader, the win on Sunday was a comeback. She started the final round with a three-shot lead but wasn’t able to take advantage of it as she got off to a slow start with a double-bogey on the par-4 first and a bogey on the par-4 second. Kim added another bogey on the par-4 eighth, making her victory a lot tougher.

Yet Kim slowly found her pace in the second half. She added a birdie on the par-5 15th to lower her score to seven under par, but added another bogey on the par-3 17th. Heading to the final hole, Kim was one shot behind Bronte Law of England and Lee Jeong-eun, who were tied for the lead.

This time, Kim didn’t let her chance of winning go. Just after hitting her second shot short of the green on the par-5 18th, she barely missed her eagle putt and tapped the ball in for a birdie to force a sudden-death playoff.

Playing the 18th hole, in the first playoff hole between Kim, Lee and Law, Kim hit her tee shot at the almost exact same spot as she did during her final round. Once again, Kim hit her second shot just short of the green. As both Lee and Law missed their birdie putts and Kim successfully tapped in her 2 feet birdie putt, she was declared the winner.

“It was really tough,” Kim was quoted as saying on LPGA website. “The whole day I got a lot of pressure. And I missed the last par 3, and that’s really bad for me. I still feel like my heart almost fell out of my chest.”

This is Kim’s first victory in 10 months, since the Thornberry Creek LPGA Classic in July 2018. With a win, Kim took home the prize money of $270,000. As this was Kim’s eighth win on the LPGA Tour, she is now tied at fifth in terms of the number of wins among Korean golfers on the LPGA Tour. Of her eight victories, four were playoff wins and by winning another tournament in a sudden-death playoff, Kim improved her record to 4-0.

“It was really frustrating because of the beginning holes,” Kim was quoted as saying on LPGA website. “I try to keep going and focus […] That taught me a lot today.”

After a successful career on the Korean Tour, Kim joined the LPGA Tour in 2015, earning a full-time status by finishing tied for fourth at the 2014 LPGA Qualifying Tournament. During her first season on the Tour, Kim won three tournaments to earn the Tour’s Rookie of the Year award.

In 2017, she added another win at the Citibanamex Lorena Ochoa Match Play in Mexico City. Yet after her win in May, it took her until July 2018 for Kim to pick up another win.

This season, Kim got off to an inconsistent start, including one missed cut. Prior to her win on Sunday, Kim’s best finish was a runner-up at Hugel-Air Premia LA Open, which was held a week before the LPGA Mediheal Championship.

Although rookie Lee wasn’t able to pick up her first LPGA Tour win after three-putting at the first playoff hole, this was still her best finish of the season. Amy Yang and Ji Eun-hee were the other two Korean golfers who managed to finish inside the top 10, shooting five under par for the weekend and tying for fourth.

The LPGA Tour will take two weeks off before the season resumes at the Pure Silk Championship in Williamsburg, Virginia, from May 23 to 26.