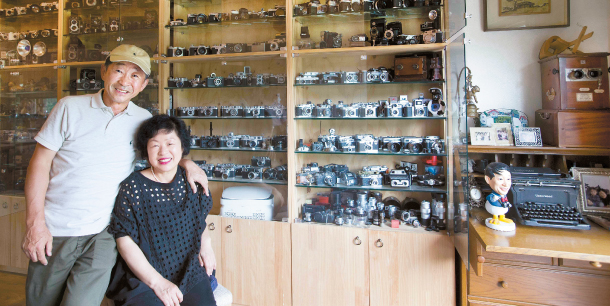 A person’s so-called second life after retirement has become a hot topic in rapidly aging societies like Korea. One of the most interesting examples of a second life can be seen through the exhibition of photographer couple Choi Jaeyoung and Kim Meehee, which starts on Friday at Obaekjanggun Gallery in Jeju Stone Park on Jeju Island.

Choi, 67, worked as a photojournalist for 35 years at Korea’s major newspapers based in Seoul - mainly at the JoongAng Ilbo. Kim, 64, was a schoolteacher for more than 30 years. After they both retired in the early 2010s, they moved from Seoul to Jeju in 2014.

Choi then focused on taking pictures of stones unique to the volcanic island, including those in Jeju Stone Park, whose mysterious or grotesque shapes remind viewers of the deities and monsters in the mythology of the island.

Meanwhile, Kim learned photography techniques from her husband and took interest in taking pictures of water drops, including morning dew. Combing through their work, the couple decided to hold their own exhibition.

From top, two works from the “Seolmundae Halmang and Her Five Hundred Sons” series by Choi Jaeyoung at Jeju Stone Park and two works from “Space, Drop of Light” by Kim Meehee. [CHOI JAEYOUNG, KIM MEEHEE]

Choi’s photos of stones and rocks in Jeju Stone Park will be shown under the title “Seolmundae Halmang and Her Five Hundred Sons.” Seolmundae Halmang is a giant goddess who is said to have created Jeju island by piling up soil she brought from overseas. One day, she was making porridge in a gigantic cauldron for her 500 sons. While stirring the porridge, she accidently fell into the cauldron and died.

Her 500 sons returned home, and without knowing about the tragic accident, they began to eat the porridge. When the porridge was almost finished, they found the bones of their mother at the bottom of the cauldron and figured out what had happened. After crying endlessly, the sons transformed into stones one by one.

The stones in Choi’s photos look like the sad and agonizing characters from the legend.

“I tries to express the space involving each stone and the stone’s life and breath, while throwing out our fixed ideas about stones,” Choi said.

Meanwhile, Kim is presenting her works under the title “Space, Drop of Light.”

She said, “When the sunlight fell on morning dew, I saw a world of splendid light. And I saw a powerful flow of energy from the water drops of frost.”

The couple said that they have been “born again thanks to Jeju Island and photography.”