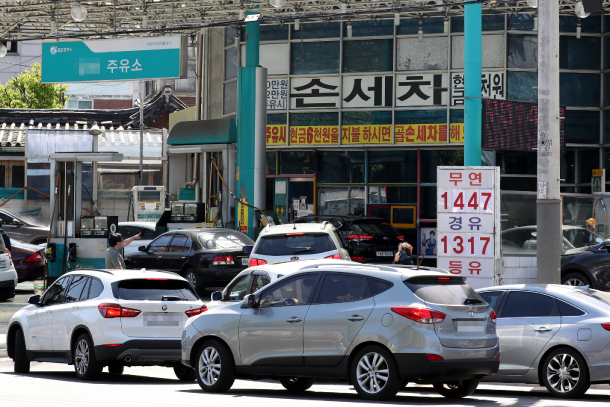 Cars line up in front of a gas station in Seoul on Monday, a day before the government’s fuel tax discount is reduced from 15 percent to 7 percent. The average gasoline price is expected to rise by 65 won (＄0.06) per liter. [NEWS1]

Prices at the pump will rise today as the government phases out its fuel tax breaks.

According to the Ministry of Economy and Finance, the government’s fuel tax discount of 15 percent will be cut to 7 percent starting today. As a result, gasoline prices will increase by 65 won ($0.06) per liter, diesel by 46 won per liter and liquefied petroleum gas (LPG) by 16 won per liter.

The tax cut that began last November was supposed to be fully lifted from today.

The Economy Ministry announced in April that it would extend the tax cut to the end of August to help small businesses and households, but cut it in half.

According to Opinet, an online service by the Korea National Oil Corporation that shows oil price changes, the average price of gasoline in Korea on Monday was 1,476.76 won per liter. From today, the average will increase to roughly 1,542 won per liter.

As for Seoul, which pays higher pump prices than other parts of the country, the average price will likely increase from 1,564.26 won per liter on Monday to over 1,629 won.

Aside from the reduced tax break, international oil prices are rising. According to Opinet, the price of Dubai crude oil rose from $51.86 per barrel on Jan. 2 to over $70 at the end of April. Major factors in the rise include U.S. sanctions on Venezuela and Iran, which are major oil producers.

Once the tax break is fully lifted in September, gasoline prices will rise by 123 won per liter, compared to the past six months. The diesel price will increase by 87 won and LPG by 30 won.

The government also announced it will monitor oil refiners and gas stations for unfair business activities such as price fixing and stockpiling in the wake of the fuel price changes.

“With our first phase-out taking place on May 7, we will be monitoring any unfair business activities in cooperation with the Trade Ministry as well as the Fair Trade Commission,” an official from the Economy Ministry said.