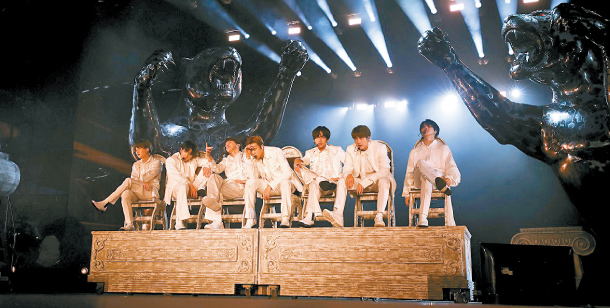 K-pop sensation BTS performs at the Rose Bowl in Pasadena, California, on Saturday. Around 60,000 fans cheered ecstatically in unison as members of the boy band cried out “Rose Bowl, make some noise,” to open up their latest world tour. The 150-minute show featured performances of songs from the group’s latest album “Map of the Soul: Persona,” as well as hits from previous releases. [BIG HIT ENTERTAINMENT]

LOS ANGELES - Some 60,000 fans cheered ecstatically in unison as members of K-pop boy band BTS cried out “Rose Bowl, make some noise,” to open up their latest world tour at the outdoor Rose Bowl athletic stadium in Pasadena, California, on Saturday.

The densely packed stadium roared and shook throughout the 150-minute performance, the first stop on BTS’s new world tour “Love Yourself: Speak Yourself.”

Starting with the Rose Bowl on Saturday and Sunday, the septet will hold 16 large-scale concerts in eight cities including Chicago, London, Paris and Osaka, Japan, for the globe-trotting tour. Fourteen of the concerts were already sold out.

“Dionysus,” a hip-hop number off the band’s latest Billboard No. 1 album “Map of the Soul: Persona,” kicked off the Saturday concert, with the seven BTS members appearing onstage in all-white costumes as fans erupted in shattering cheers.

The members’ powerful dance moves continued into the next song, “Not Today,” another hip-hop song released in 2016.

Other members hollered “Rose Bowl,” unable to keep down their thrill at returning to the American concert scene.

BTS finished up the U.S. leg of its previous world tour last year at the Citi Field baseball stadium in New York City in October, becoming the first Korean act and one of only a few non-American musicians to perform at the stadium that accommodates some 40,000 spectators.

Since October, the band has grown even more popular, winning one more No. 1 on the Billboard 200 album chart last month with “Persona” and returning to the United States to rock the bigger Rose Bowl stadium, where 60,000 seats with an unhindered view of the stage out of the total 90,000 were all packed late Saturday.

Harnessed to high-tension wires, the youngest member, Jungkook, glided from the back of the main stage to almost midway to the back of the stands, sending fans into rapt cheers.

Midway through the concert, the stands shook with ear-splitting screams and pounding jumping as BTS performed its hypnotic single “Boy With Luv.”

A medley of “Dope,” “Baepsae” and “Fire” led the fans to sing along with the band in articulate Korean.

“Idol” and “Fake Love,” two of the band’s most famous songs, brought the show to its peak before the members came back onstage in customized Dior stage costumes to perform “Mic Drop.”

“Make It Right” and “Mikrokosmos,” tracks off “Persona,” were staged in response to the fans’ heated calls for an encore.

RM called the Saturday concert the most important night of his life, while the other members stressed that their dreams came true with the Rose Bowl show. They all expressed special thanks to their fans, ARMY, for making the global tour possible.