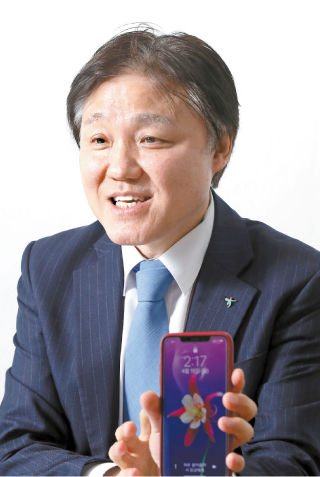 The technology will be an important part of KEB Hana’s future digital services, according to Han Jun-seong, deputy president and chief future innovation officer at Hana Financial Group.

Unlike conventional record-keeping systems, which are based on centralized ledgers, blockchain creates digital ledgers of transaction data on computers in many locations, known as nodes, making it relatively tamper-resistant.

Acknowledging the potential, the bank and Hana Financial Group have joined global blockchain consortia, including the IBM-backed Hyperledger Fabric project, R3CEV and the Enterprise Ethereum Alliance.

The Korea JoongAng Daily sat down with Han to discuss KEB Hana’s transition to digitalization and business strategy involving the blockchain technology.

Q. What differentiates Hana’s digital strategy from that of its peers?

A. To gain an edge over competitors in the future, we need to foster our digitalization efforts both at home and abroad. But KEB Hana is not an ICT company, so we need more cooperation with competitive tech companies in the domestic and global markets. Through robust partnerships, we aim to release financial products and services only available on our digital platform. Some products now sell better on mobile than at brick and mortar branches, but when counting the entire product categories, the sale from physical branches take a larger portion. If we want online and mobile channels to be the majority, we need a more drastic drive to go digital.

We are also carefully looking at the open application programming interface (API) that is being pushed by the financial regulator. Through the open software system, the banks will be more challenged to cooperate with fintech players.

What are some examples of partnerships that you consider crucial for KEB Hana’s digital push?

We have joined hands with mobile instant messenger operator Line to open an internet-only bank in Indonesia, and the move is a good example of cooperation. It could be a bit risky if we just go straight to launching a branch there and operate a banking business.

We could be more successful by being armed with advanced technologies and leveraging the messenger platform popular in the country. The Indonesian market is very consumption-driven and has developed technology infrastructure, which makes for favorable entry conditions.

KEB Hana Bank joined major multinational consortia. What kind of activities will the bank engage in with them and what benefits come from membership?

The teams keep us updated about their blockchain-based projects or member company activities related to the technology. We also attend workshops hosted by the consortia and are sometimes involved in pilot projects.

Korea still has low acceptance and use cases for blockchain, not to mention the relatively small size of the domestic market. So, the participation can help us with those shortcomings.

KEB Hana is active in filing patents concerning blockchain. What kinds of services are covered by these patents?

There are a wide range of use cases. In Korea, it takes about 14 days to issue student ID cards because of a large pool of students at colleges. They all ask the bank to complete the task in March, but it is always hard to keep to the timeline because there are many partnered colleges with thousands of students.