No need to interfere

No need to interfere 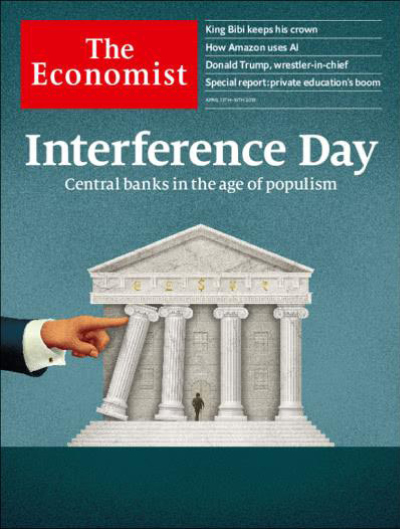 The Old Lady of Threadneedle Street is the nickname of the Bank of England located at Threadneedle Street in London. The name comes from a satirical cartoon by James Gillray in 1797, where a gentleman is wooing an old lady sitting on a money chest and trying to rob her. The man is William Pitt the Younger, the prime minister at the time. The cartoon was mocking him for urging to end the gold standard and issue currency to fund a war.

The issuing power of the central bank is a prey that politicians are eying. Fiscal spending of the government needs to go through Parliament. Currency policy is relatively free from such checking. It is the reason why politicians pressure central banks to fund a war or boost the economy. Due to the adverse effects on price such as inflation as a result of meddling by politicians in the 1970s, each country reinforced the independence of the central bank to stabilize the price.

The independence of the central bank is once again in crisis. In a cover story titled “Interference Day” on April 13, the Economist pointed out that monetary policies were becoming political. What threatens central banks is the rise of populism, nationalism and an economy that cannot forget the sweetness of liquidity provided by the central banks after the global financial crisis. To politicians obsessed over an economic boost, money-printing power of the central bank is an attractive card. It is why U.S. President Donald Trump pressures the Federal Reserve to lower the interest rate.

Korea also joined the ranks of pressuring central banks. While Bank of Korea Governor Lee Ju-yeol said that he was not considering to lower the interest rate, Deputy Prime Minister for the Economy Hong Nam-ki is supporting an interest rate cut after a bad report card of minus growth in the first quarter. The contest between those guarding the chest and those who want to take it is inevitable.

We’ve already seen enough of the fate of monetary policy swayed by politics.