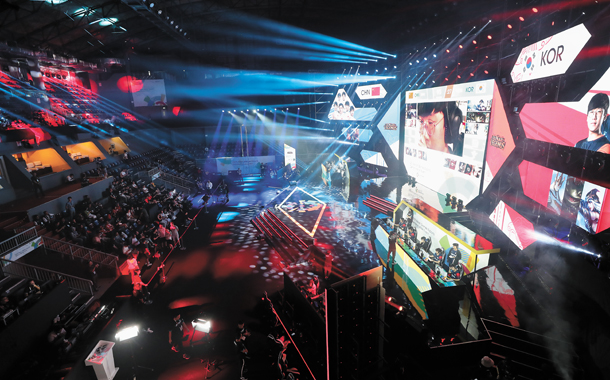 The final League of Legends game between China and Korea at the 2018 Asian Games in Jakarta, Indonesia, held Aug. 29, 2018. The Esports industry may take a hit if the World Health Organization certifies gaming addiction as a disease at its general assembly later this month. With enough endorsements from governments around the world during the assembly, the new classification will go into effect starting 2022. [YONHAP]

Absolutely not, argues the Korean gaming industry and medical experts opposing the World Health Organization’s (WHO) plan to certify gaming addiction as a disease at its general assembly later this month. They believe the measure lacks conclusive scientific proof and could harm Korea’s gaming industry.

At a conference hosted by the Game Science Forum in Seoul last week, four medical and media experts claimed that the WHO does not have enough scientific proof to formally include gaming disorders in its definitive disease manual.

Beyond just concerns about the fate of the industry, they worry about the implications of government intrusion into the habits of individuals and the possibility that professional gamers could be deemed sick as a result of their practice and competition time.

Launched in September last year, the Game Science Forum has 17 scholars from a wide variety of relevant fields, including neurology, psychiatry, cognitive science, gaming software, media and communications. The event last week was organized by Seoul National University and sponsored by the Ministry of Culture, Sports and Tourism.

The WHO already included “gaming disorder” in a draft of its International Classification of Disease, Eleventh Revision (ICD-11), and the decision is set to be endorsed by governments around the world during its upcoming general assembly. With enough endorsements, the new classification will go into effect starting 2022.

The move would place addiction to video games, both online and offline, in the same category as substance abuse and gambling addiction. It stipulates on its website that gaming addiction could result in “significant impairments in personal, family, social, educational, occupational or other important areas of functioning.”

“There really isn’t any good evidence that games are causing an epidemic,” said Christopher Ferguson, a psychology professor at Stetson University, Florida, during his session at the forum. “Games don’t make people violent. It seems to be things like academic stress that contribute to violence, but not the gaming itself.”

“It’s not that we should ignore that there is a problem,” he said. “Parents should certainly notice it, but if it is an issue that children are stressed, we should look at fixes there. They could be playing games for hours as a coping mechanism.”

The presenters at the forum agreed that the overwhelmingly negative view toward gaming itself has prevented academia from pursuing quality research to test whether gaming is addictive in the first place.

“There isn’t even a unified agreement among academic researchers on what tools and methods to use in verifying the addictiveness of gaming,” said Yoon Tae-jin, a communications professor at Yonsei University. “At one point, the academic society just started presupposing that gaming is addictive in nature, which further damaged the public image of online games and gamers.”

Some experts claim that games are indeed addictive and that excessive gaming can damage the brain, like methamphetamine or heroin.

“When people play games, their brains show similar changes to when they are on addictive substances like heroin,” said Kim Dai-Jin, a psychiatry professor at the Catholic University of Korea.

Kim found in 2016 that playing video games, especially violent ones, can trigger gamers to exhibit aggressive behavior and have dangerous thoughts. He is one of the medical experts in Korea to claim that gaming disorders can be a threat to health.

“There were many patients of all age levels coming into my office who were unable to normally function because they were spending so many hours playing games,” Kim said. “Some of them were hurting themselves and damaging their relationships with others. Gaming addiction is a disease that our society should take care of.”

The Ministry of Science, ICT and Future Planning named the Catholic University of Korea in 2015 as an official research center to study ways to curb the country’s gaming addiction. It promised to devote 17 billion won ($14.5 million) to research efforts through next year and named Kim as the chief academic expert leading the ministry-sponsored initiative.

Left: Christopher Ferguson, a psychology professor at Stetson University in Florida, speaks during his session at a conference hosted by the Game Science Forum last week. He claims evidence showing games are addictive and causing an epidemic is weak. Right: A screenshot of the World Health Organization’s information on gaming disorder. The organization included gaming disorder in a draft of its ICD-11. [GAME SCIENCE FORUM, SCREEN CAPTURE]

Korean gaming, even prior to the WHO designation, has been hit by the government policies and campaigns aimed at excessive gaming.

As competition for college entrance intensified and forced students to devote their time even after school to studies, many parents and institutions identified computer games as so-called miscellaneous acts, acts that distract students from academic endeavors.

Negativity about games and those who play them has been a dominant theme since playing computer games became a popular pastime for Koreans, especially for students.

Over the years, institutions and parents have called for more regulations and stricter guidance programs for teenagers. In 2012, the Ministry of Gender Equality and Family enacted the online game “shutdown law,” nicknamed the “Cinderella curfew,” which has banned gamers aged 16 and below from playing online games between midnight and 6 a.m.

The shutdown law immediately took a toll on the gaming industry. According to a report from the Korea Economic Research Institute in 2015, the dip in revenue was noticeable for the companies, while marketing expenditures grew. Game companies also had to spend money to build systems that automatically blocked teenagers in the age group from midnight onward.

The size of country’s gaming market shrank right after the shutdown law came into effect in 2012, the report said. Although the domestic game market increased 13.7 percent a year on average from 2007 to 2012, after the statute was enacted, the market size contracted 0.3 percent. 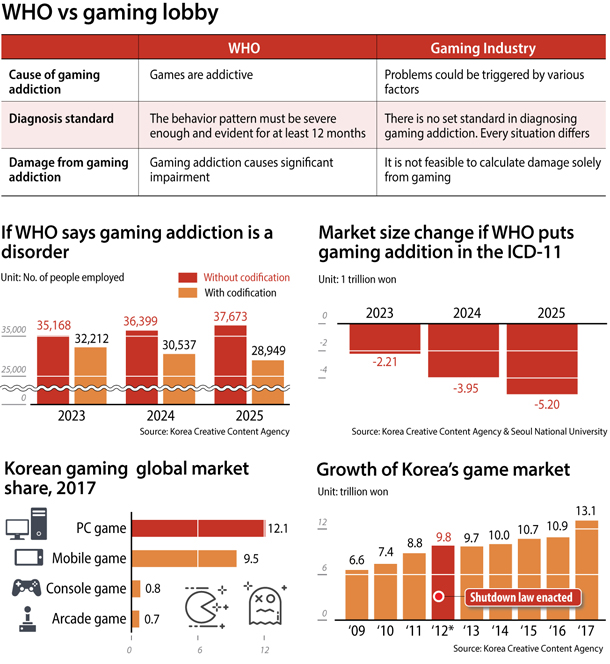 Yet the Cinderella curfew turned out to have had no significant impact on the internet use of adolescents, according to a 2017 study by Seoul National University.

Although average monthly game playing for adolescents decreased when the policy came into effect, the hours steadily increased again starting 2014, the report said.

“It is safe to say there is more to lose than to gain from the current policy as there are services that allow adolescents to bypass the age restriction in playing games,” said Kim Min-Seok, author of the report.

Only the gaming industry was hurt and no one was really helped. Experts contend that the shutdown law did not achieve the desired outcome and only increased the financial burden on the country’s gaming companies.

“The shutdown law is nothing more than a means for government officials to increase their influence on people,” said Wi Jong-hyun, an economics professor at Chung-Ang University and president of the Korea Academic Society of Games. “The policy is just a part of society’s attack on the new medium, just like how it reacted to comic books and televisions when they first came out.”

Industry sources expect the gaming industry to suffer an even greater loss of profits once the WHO officially codifies gaming addiction as a disease later this month.

According to a report from researchers at Seoul National University published last year, gaming industry sources believe the Korean government will enforce a number of fresh regulations and prevent access to games in an attempt to follow the WHO’s decision.

The report claims that the change would be similar to how the tobacco industry faced profit drops when the WHO codified smoking addiction as a disease in 1980.

In preparing for WHO’s upcoming meeting, 27 organizations and 16 universities planned last week to form a task force in an attempt to challenge the WHO’s decision and avoid the expected damage.

The task force, which is led by Wi, president of the Korea Academic Society of Games, contends that classifying gaming addiction as a mental disorder is a step backward in an age where technology education is emphasized.

“We are looking to come up with solutions for the gaming industry to maintain their businesses on top of proving that games are not addictive and that the move is a potential suppression of freedom,” the task force said in a statement on April 26.

“We will also work to provide an environment where gamers can freely game in a healthy manner.”

The Ministry of Culture, Sports and Tourism, together with Korea Creative Content Agency, also publicly expressed its objection to the WHO codifying gaming addiction as a disease on Wednesday.

“The fact that teenagers play games excessively is not a problem in itself,” the ministry said in a letter to the WHO. “Rather, teenagers could have been affected by various psychological and social factors, such as pressure from their parents, teachers and peer groups.”

Some medical experts warn that the organization’s “medicalization” can negatively affect consumer interest. Medicalization is when a condition commonly not seen as a medical problem becomes a disease in need of treatment.

“Having seen dementia becoming overly medicalized, my experience tells me the possibility is very big, and the domestic and global market for treatment is also going to be immense,” said Lee Kyung-min, a neurology professor at Seoul National University and president of the Game Science Forum at the event last week.

Dementia has become an easy diagnosis for doctors, and they prescribe medicinal treatments and therapies for even those who show mild, temporary memory loss, he said.

Pharmaceutical companies have been making huge profits from the phenomenon, he added. Lee’s job as a neurology doctor mainly entails diagnosing and treating patients with dementia.

“Honestly, designating gaming addiction as a mental disorder is good news for doctors and pharmaceutical companies,” Lee said. “Doctors and pharmacists are essentially given a chance to make loads of money by diagnosing patients with gaming disorder.”

Lee contends that gaming addiction is a nonclinical issue. He warned that medical experts could easily resort to diagnosing gaming addiction to patients instead of finding the true reason behind symptoms, overusing and misusing the codification.

When the classification comes into effect, the Korean Esports industry could also take a hit, as virtually all of the professional players would be considered to be patients with gaming disorder.

Under the new WHO classification, prominent Esports stars like Lee Sang-hyeok, the top League of Legends gamer, might need treatment to fix gaming addiction, as they spend most of the time playing games.

The content agency estimates that the Korean game market would have gained 6.5 percent and reached 13.99 trillion won in 2018 due to growing investment in mobile games and vitalization of the Esports industry.

The market is dominated by Nexon, Netmarble and NCSoft, while the most popular games are League of Legends, PlayerUnknown’s Battlegrounds and FIFA Online 4, according to Gametrics.