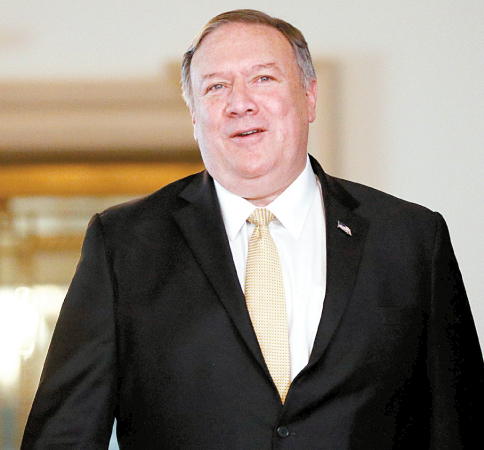 U.S. Secretary of State Mike Pompeo on Sunday said the possibility of reaching a negotiated settlement with North Korea on its nuclear program remains open in spite of Pyongyang’s provocative military test on Saturday.

Pompeo’s remarks, made during an interview with broadcaster ABC, reflected enduring optimism in the U.S. administration for dialogue with the regime in Pyongyang despite a deadlock and North Korean leader Kim Jong-un manifesting his frustrations with ever-growing provocations.

“We believe that there’s an opportunity to get a negotiated outcome where we get fully verified denuclearization,” Pompeo said, echoing his boss, U.S. President Donald Trump, who on Twitter Saturday seemed to renew his faith in Kim’s earlier promise not to conduct nuclear and intercontinental ballistic missile (ICBM) tests while in dialogue with Washington.

“And so we hope that this act that he took over the weekend won’t get in the way,” Pompeo added.

Under Kim’s personal supervision, North Korea conducted what it called a “strike drill” on Saturday, firing a volley of unidentified short-range projectiles from its eastern coast in a northeasterly direction into the East Sea. Some of the launched rockets are believed to be the country’s “new-type tactical guided weapon,” which it claimed to have tested earlier on April 17.

A new satellite image of the drills published by CNN on Monday showed a smoky trail from a rocket that Jeffrey Lewis, director of the East Asia Nonproliferation Program at the Middlebury Institute, said was likely a short-range ballistic missile.

The North’s state media on Sunday broadcast footage and images of several multiple rocket launchers firing the projectiles, as well as of the new weapon apparently being launched vertically from a transporter erector launcher (TEL). South Korean military analysts have said the weapon in question could be a North Korean variation of the 9K720 Iskander, a short-range ballistic missile imported from Russia and first displayed by the regime mounted on TELs at a military parade in Pyongyang last February.

Pompeo, however, was quick to point out that Kim had not transgressed a promise to Trump made during their first summit in Singapore last June, as the weapon tested on Saturday was not an ICBM.

“We know a couple things,” Pompeo said. “One, at no point was there ever any international boundary crossed. That is, they landed in the water east of North Korea and didn’t present a threat to the United States or to South Korea or Japan. And we know that they were relatively short-range.”

In another interview with Fox News on the same day, Pompeo claimed that the North’s self-imposed moratorium on missile testing “was focused, very focused, on intercontinental missile systems, the ones that threaten the United States for sure.”

South Korea, too, was cautious about putting at risk the progress made so far in bringing the North to the negotiating table, issuing a slap-on-the-wrist warning to Pyongyang to “halt any actions raising military tensions on the Korean Peninsula” as per a military agreement signed at the third inter-Korean summit.

One of the elements on the agenda for working level discussions on North Korea between Seoul and Washington later this week - humanitarian relief - was brought up in the ABC interview by Pompeo, who cited a UN report to highlight the food insecurity in the country.

“So you’ll recall … that it’s permissible for humanitarian assistance, that is, the sanctions permit the North Koreans to purchase food products,” Pompeo said. “That’s why when I see things like happened on Friday night, where that money could have gone to taking care of his own people, it’s - it’s so unfortunate.”

The comment, which appears to be an oblique criticism of Pyongyang’s policy of prioritizing guns over butter, is also reflective of the U.S. State Department’s position on not providing food assistance to the North, something which Seoul favors as an option to breathe life into the stagnant negotiations.

According to a diplomatic source in Washington, the United States’ idea of humanitarian relief likely refers to medical help in the form of equipment or vaccines rather than food aid. While both types are expected to be discussed during U.S. Special Representative for North Korea Stephen Biegun’s visit to Seoul on Thursday to Friday, those talks appear unlikely to yield immediate results in the form of aid anytime soon.