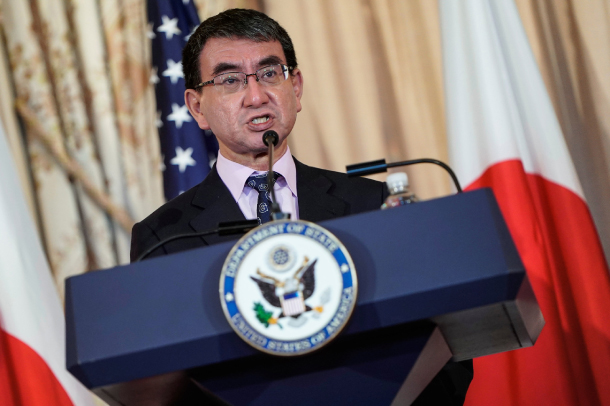 “The legal basis of Korea-Japan relations is on the brink of getting damaged,” Kono said while visiting Ethiopia in an interview that aired on NHK Monday. “This is an issue the Korean government has to respond to with responsibility.”

Kono’s remarks followed the Korean Supreme Court decisions last year calling for Japan’s Nippon Steel & Sumitomo Metal and Mitsubishi Heavy Industries to compensate Koreans forced in labor during World War II. When the Japanese companies did not comply, the victims and their families began legal procedures to seize and liquidate the companies’ assets in Korea.

Japan last week protested through diplomatic channels the Korean plaintiffs filing a motion in a local court for the selling of assets of Nippon Steel and Nachi-Fujikoshi in Korea. The selloff process could take three months.

In a press conference last Thursday, Korean Foreign Minister Kang Kyung-wha emphasized that Seoul has the “clear will” to improve relations with Tokyo in a future-oriented manner but maintained that the government will respect the decision of the judicial branch on the issue of forced laborers to find a resolution that is acceptable to the victims.

But Kono emphasized that “this is not an issue of interference in the judicial branch,” adding that the “Korean government has to properly resolve” the problem.

Kono did not specify exactly what sort of retaliatory measures Japan would take or when.

Tokyo has protested the Supreme Court rulings calling for compensation of forced laborers, claiming that a 1965 treaty normalizing bilateral relations with Seoul, which provided the Korean government with an economic cooperation fund, settled all compensation matters. Korea’s top court, however, ruled that the Japanese government failed to acknowledge the illegality of its colonial rule and that the victims’ rights to individual compensation have not expired.

Seoul and Tokyo have faced a deterioration in ties over historical issues including Japan’s wartime sexual slavery. Last December, Japan’s complained that a South Korean warship locked a fire-control radar on a Japanese maritime patrol aircraft.

Korean President Moon Jae-in sent a congratulatory message to Japanese Emperor Naruhito on May 1 on his ascension to the throne. He expressed hope that Emperor Naruhito, like Emperor Akihito, “will continue to take firm steps for peace, while remembering pains of war” and “pay much attention to and have affection for the amicable development of Korea-Japan relations.”

On North Korea’s latest launch of short-range projectiles into the East Sea, Kono said that Seoul, Tokyo and Washington “are collecting information and analyzing it.” Kono emphasized the need for maintaining trilateral cooperation to handle the denuclearization issue.

Foreign Minister Kang held separate phone conversations with U.S. Secretary of State Mike Pompeo and Kono on Saturday, immediately after North Korea launched the projectiles. Likewise, Stephen Biegun, the U.S. special representative for North Korea, will visit Tokyo on Tuesday and Wednesday and Seoul on Thursday and Friday to discuss the denuclearization of North Korea.

Kono added that the “ball is in North Korea’s court right now.”

In the NHK interview, Kono said that addressing the issue of Japanese nationals abducted and taken to North Korea in the 1970s and 1980s was not a prerequisite to holding a summit between Kim and Abe.

However, he added that there was no change in Japan’s position that the outcome would require a “comprehensive resolution” to the nuclear and missile issues as well as the abductee issue.