Going where no lawyer has gone before

Going where no lawyer has gone before 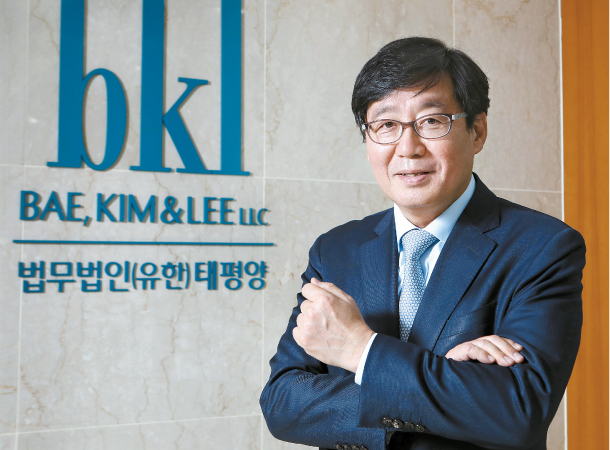 Bae, Kim & Lee LLC takes pride in being the first Korean law firm to do many things: the first to open an office in Beijing; the first to establish a foundation providing pro bono and legal aid services for the socially disadvantaged; the first to launch a special team on inter-Korean relations and inter-Korean economic cooperation; and the only law firm in Asia to be named one of the world’s 40 leading arbitration law firms by the Global Arbitration Review this year.

But when it comes to promoting the firm’s North Korea team, founded in 2002, Kim Sung-jin, the managing partner of Bae, Kim & Lee (BKL), goes the extra mile. He highlights the fact that the group was maintained even during the past two conservative administrations, when South-North cooperation was meager and the team barely had any work to do.

The situation now is not much different. Denuclearization talks between Pyongyang and Washington have hit a logjam and Seoul’s planned cooperative projects with the North are hardly making any progress due to international sanctions.

Yet none of that matters to Kim.

In the long run, Seoul will have to prepare for the day when North Korea opens up and make changes to its legal system. One South Korean law firm will lead the way in that historic transition, Kim says.

That will be BKL.

“It’s not about whether or not we’re making any profit at this point,” says Kim. “Maybe one day in the far-away future we could make money, but that day doesn’t seem near.”

“We’re trying to look at the long haul.”

In a recent interview with the Korea JoongAng Daily at the law firm’s office in Gangnam District, southern Seoul, Kim talked about BKL’s pioneering spirit and how it propelled the law firm into becoming one of Asia’s leading providers of legal services.

The Beijing office opened in 2004, representing the first time that a Korean law firm had opened an office in Beijing. The office advises Korean and Asian companies conducting business in China and in neighboring countries on a variety of matters from corporate governance, mergers and acquisitions, real estate development and securities to antidumping. It also advises Chinese clients wanting to invest in Korea or do business here.

The Shanghai office opened in 2008, making BKL the first Korean law firm to have two offices in China. Aside from advising on mergers and acquisitions, as well as joint ventures, the Shanghai office has increasingly been providing legal services to companies in areas connected with the fourth industrial revolution, such as bio health care and TMT [technology, media and telecom]. We were the first Korean law firm to open an office in Dubai in 2015. Ever since, the Dubai office has provided legal services to Koreans in the Middle East and Korean companies working in the region across a variety of fields, including energy, resource development, construction and real estate.

In Southeast Asia, BKL has two offices in Vietnam - Hanoi and Ho Chi Minh City - one in Yangon and another in Jakarta. In 2018, BKL was honored with The Acquisition Deal of the Year award at the Vietnam M&A Forum for the third consecutive year for successfully advising Lotte Card in its acquisition of Techcom Finance, a subsidiary of Techcom Bank, a major commercial bank in Vietnam. Lotte Card acquired a 100-percent stake in Techcom Finance in 2017 and entered the Vietnamese consumer finance and credit card market. It was the first time in the Vietnamese financial market that a foreign credit institution acquired a 100-percent stake in a Vietnamese credit institution.

We set a high value on both inbound work and outbound work. The domestic legal market is already saturated, so we place heavy emphasis on entering the global market, whether opening offices in foreign countries or working with foreign companies with branches in Seoul. In terms of inbound work, our efforts have been showing some positive results over the past two to three years because many global companies are knocking on our doors. For instance, we cover more than half of the Korean legal work of Chinese companies that have branches here. In 2016, BKL was chosen to counsel China’s Doublestar Group on its acquisition of Kumho Tire without an RFP [request for proposal].

Because Korean companies are finding it harder to land big deals in Korea, more and more of them are moving abroad to enter foreign markets, which is why BKL decided to tag along to help them. Luckily, our work is paying off in the outbound market as well. BKL was ranked among the 40 leading international arbitration law firms by the Global Arbitration Review this year, the only Asia-based law firm to make it into the top 40.

What are BKL’s strengths in working globally? How does it stand out from other major Korean law firms?

The most important thing about working in a foreign office is how smoothly that office cooperates with its Seoul headquarters. We can’t send all our lawyers abroad so it’s important we respond as quickly and effectively as possible when our foreign staff contacts us in Seoul. Our communication system for that is better than any other law firm in Korea. So our biggest strength is that, using such a strong network, we’re capable of providing diverse legal services across various legal practices through a “one-stop” system. We also have great local teams, people who have strong human-to-human ties in the political and economic sectors of that foreign country and lawyers with years of experience providing legal services there.

How would you define BKL’s ultimate globalization goal?

We’ve already been acknowledged as Asia’s leading law firm for arbitration, so our next goal is to become Asia’s best in all practices.

We have about 40 members on the team, led by Yoo Wook, who has long served as an adviser to the Ministry of Unification and Hyundai Asan on legal matters pertaining to inter-Korean economic cooperation, such as the Kaesong Industrial Complex and Mount Kumgang tours; and Lee Chan-ho, who worked in the Unification Ministry for over two decades as head of South-North exchanges and head of South-North dialogue management, among other roles.

We’re aware that doing business in North Korea will take a long time even if denuclearization talks between U.S. President Donald Trump and North Korean leader Kim Jong-un turn out well, which is why we’re trying to look at the long haul.

On numerous occasions, our Inter-Korean Relations and Inter-Korean Economic Cooperation Special Team have provided legal advice to the South Korean government and companies involved in cross-border projects, such as the Kaesong Industrial Complex and Mount Kumgang tours. BKL was an official sponsor for the PyeongChang Winter Olympic Games in early 2018 and offered legal advice to Korean companies supporting visiting North Korean athletes.

Later this year, the team is planning to publish a book series on North Korean legislation - in Korean and English - detailing its nearly 20 years of know-how.