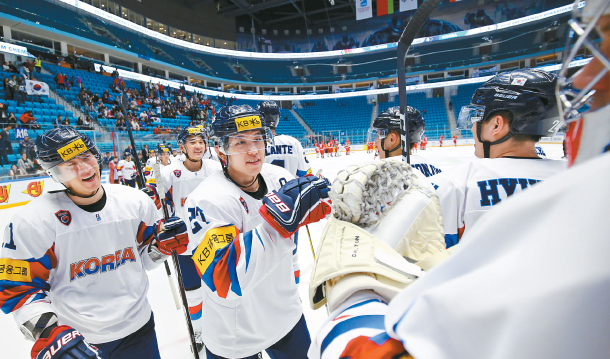 The Korean men’s ice hockey team celebrates after winning its match against Belarus at the IIHF World Championship Division I Group A in Kazakhstan on Sunday. [KOREA ICE HOCKEY ASSOCIATION]

The Korean national men’s ice hockey team has a glimmer of hope for the 2022 Winter Olympics in Beijing.

By finishing third with three wins and nine points, Korea failed to move on to the top division for the 2020 season for the second time, but they’ve proved to have the potential to succeed next season. Korea finished just one point shy of earning a promotion, allowing Kazakhstan and Belarus to move up to the top division.

Following a poor showing at the 2018 PyeongChang Winter Olympics, ice hockey has lost its popularity in the country and the players weren’t receiving much support. Additionally, the Daemyung Sangmu, a military team competing in the Asia League Ice Hockey, is in the process of being disbanded.

The team also lost many naturalized players after the PyeongChang Games. For the 2018 Games, Korea granted special naturalization to a number of athletes in order to improve Korea’s chances at excelling in winter sports. Of the naturalized athletes, the men’s ice hockey team had the most, with seven.

With the naturalized athletes, the team made huge strides, earning a promotion to the top division of the IIHF World Championship in 2017.

After the Olympics ended, only three of the seven naturalized players - goaltender Matt Dalton and defenders Alex Plante and Eric Regan - continued to play for the national team.

Despite their losses in manpower, Korea was able to make a great comeback at this year’s world championships. Korea gained confidence by picking up 5-3 win against Slovenia and 4-1 win against Belarus.

Shin Sang-hoon also excelled by scoring four goals in Korea’s final game against Belarus. With his four goals, Shin finished the tournament with a total of six goals.

In addition to solid performances from veterans, Korea also managed to see some action from younger players who are expected to lead the national team at the Beijing Games. A majority of the players that competed at the PyeongChang Olympics are likely to retire within the next two to three years.

Now that the team has returned to Korea, the players will take a break before the league season starts back up in the fall, except for Kim, who has a big challenge ahead of him in the upcoming week.

Before the IIHF world championship, he announced that he will be participating in a tryout camp for the Kunlun Red Star of the Kontinental Hockey League (KHL) this month.

The KHL is the world’s second largest hockey league after the National Hockey League (NHL), and the Kunlun Red Star is based in China.

During the 2018-19 Asia Ice Hockey League season, Kim played for the Anyang Halla and finished tied for sixth in the league for the number of goals scored, with 16, and tied for 18th in assists, with 15.

If Kim makes it onto the Red Star roster, he will become the first Korean player in the KHL. Kim heads to Beijing tomorrow.

The KHL was founded in 2008 and has 25 teams competing in the league. The league has clubs based in Belarus, China, Finland, Latvia, Kazakhstan, Russia and Slovakia.