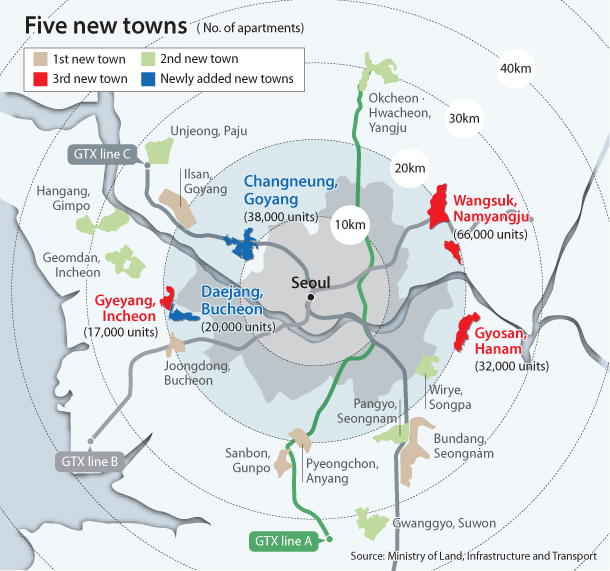 Two additional “new towns” will be created, both near Seoul.

The Ministry of Land, Infrastructure and Transport on Tuesday laid out plans to build an additional 110,000 residential units in 28 locations including the two new towns, which are in addition to three new town projects announced by the Moon Jae-in government last December.

That completes the Moon government’s grand scheme of building 300,000 housing units around the greater Seoul area to cool the real estate market.

The remaining 52,000 housing units will be in smaller projects in 26 locations around Seoul and Gyeonggi.

The government stressed that Changneung and Daejang are 25 to 30 minutes from the center of Seoul.

Tuesday’s plan was the third batch of residential projects announced by the government since last September to cool off the real estate market.

In the first batch, the government announced it would build 35,000 residential units in 17 locations.

That plan was considered a disappointment as market analysts believed it wouldn’t have any impact on curbing real estate prices.

In December, the government announced a plan for 155,000 new residential units in 41 locations including three new towns: in Wangsuk-dong in Namyangju, Gyosan-dong in Hanam, which are both in Gyeonggi, and Gyeyang-dong in the city of Incheon.

The first so-called new towns in Korea were the developments of Bundang and Ilsan planned by the Roh Tae-woo administration in the 1990s.

The second new towns included Pangyo, Dongtan and Gimpo, planned by the Roh Moo-hyun administration in the mid 2000s.

New towns are government-planned urban developments located around the capital that are meant to relieve overpopulation in Seoul.

New towns are supposed to be self-sufficient.

Out of the 300,000 housing units that will be built, 79 percent are located in 22 locations in Gyeonggi while Seoul accounts for 13 percent and Incheon 8 percent.