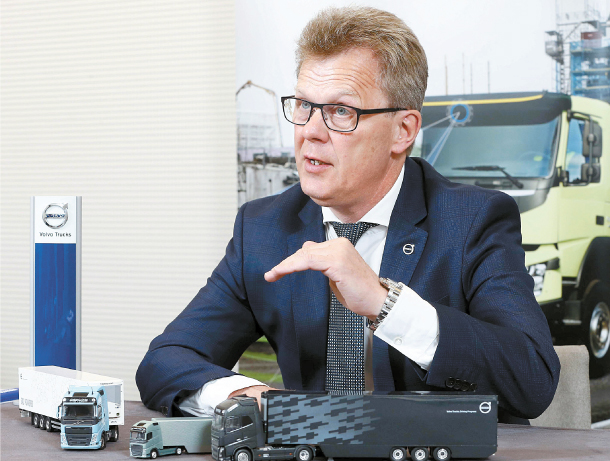 Volvo Trucks President Roger Alm discusses the future of the truck industry with the Korea JoongAng Daily on May 3 at the Grand Hyatt Incheon hotel. [VOLVO TRUCKS]

INCHEON - As the auto industry braces for sweeping technological changes, Volvo Trucks will roll out electric vehicles for the global market, including Korea, according to the company’s chief, Roger Alm.

The Volvo Trucks president told the Korea JoongAng Daily that its development of electric vehicles will grow during an interview on May 3 at the Grand Hyatt Incheon hotel. Its first deliveries of electric trucks were made in Europe earlier this year.

Alm expressed optimism in Volvo Trucks’ progress in electrification and autonomous-driving technologies, while expressing commitment to its traditional foothold in combustion engine trucks.

“We made our first deliveries to customers this year, and we will have serial production at the end of this year,” explained Alm. “We think this volume will grow, and electrification will be a part of our strategy.”

“We are starting in Europe and we will go market by market, including Korea,” added Alm who also serves as executive vice president of Volvo Group. “There will be more emissions regulations demanding electric trucks and also more demand from customers.”

Volvo Trucks made deliveries of its first electric trucks in February this year to companies in Sweden, including a recycling company and a logistics company.

The focus on electric vehicles is in an early stage for the truck industry.

But analysts expect demand for electric trucks to grow rapidly, with sales for the electric truck industry growing from less than 200,000 last year to 1.2 million units in 2025, according to market researcher Interact Analysis.

Alm, who has worked at Volvo for 30 years, said the truck maker is keeping an open approach in prioritizing technologies essential for electric vehicles.

“We are quite open in that we need to be flexible,” said Alm. “From a capacity point of view, we need to have more energy out of the batteries so that the trucks can go for longer distances.”

Alm said the company is also gearing up for autonomous driving technology, expected to have a major impact in the industry.

“We have a number of autonomous units running in mines moving limestone from quarries,” explained Alm. “That is a different way of operating a business. It’s a different business in the way it uses trucks, but I sincerely believe that it will grow.

Someday, fully autonomous trucks are expected to reduce operating costs for the U.S. trucking industry by about 45 percent, or roughly between $85 billion and $125 billion, according to a McKinsey report.

Alm, however, emphasized that autonomous vehicle technology isn’t simply up to the automaker.

“It has to go hand-in-hand with regulations, demand and develop with customers in a clever way because we cannot just put an autonomous truck out on the street,” he said.

Alm expects industry changes, such as an increasingly crowded market with newcomers.

“Competition will always be there,” said Alm. “This is a normal pattern in terms of development, improving efficiency and getting more out of the equipment.”

Despite Volvo Trucks’ commitment to developing new technologies, the truck industry veteran explained that traditional technology will continue to be very important to the company.

“For a long time, diesel and the combustion engine will be the bulk of our business, for many years ahead of us,” said Alm. “We are developing that so that we have a better environmental situation with our diesel models as well.

Alm expressed confidence in the Korean market despite a slump in truck sales last year.

Volvo, however, took the top slot in the imported commercial vehicle market.

Its share of the imported commercial car market was nearly 45 percent last year.

“Korea is the only market in which we are No. 1 in customer satisfaction and image,” said Alm. “We are very happy to see that we are keeping our market share even if the market is down.”