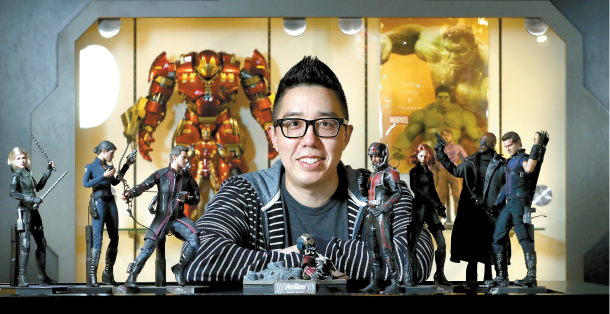 Andy Park, posing for a photo with Marvel character figures during his visit to the Marvel Collection store in Coex, southern Seoul.[SHIN IN-SEOP]

After “Avengers: Infinity War,” fans spent a year trying to guess how the villain Thanos would eventually be defeated. To keep the story confidential, not even the film’s actors knew what was going to happen.

Only a very select number of people involved with the film were trusted to keep the story secret apart from the film’s directors and Marvel Studios President Kevin Feige.

The Korea JoongAng Daily had the chance to meet one of those people, a man who’s designed many of Marvel’s most beloved characters, including Black Widow, Hawkeye, Captain Marvel, Ant-Man, Wasp, Hela from “Thor: Ragnarok,” Nebula, Gamora, Scarlet Witch and Mentis. He also led a team of artists for the MCU films “Thor: Ragnarok,” (2017) “Ant-Man and the Wasp” (2018) and “Captain Marvel” (2019).

“It’s about telling a story through the costume,” says Korean-American artist Andy Park, Marvel’s visual development supervisor. He has been part of Marvel since joining the company in 2010. He recently visited Seoul and met with local press to discuss his journey and what it is like to work for the company that the whole world is abuzz about. 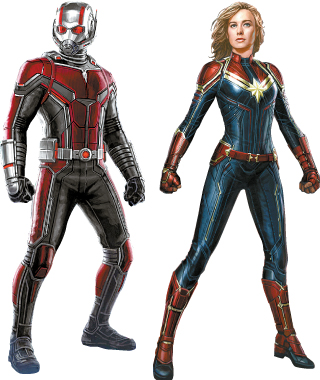 Illustration of “Ant-Man and the Wasp” by the artist depicting main characters. From left, Paul Rudd as Scott Lang, Evangeline Lilly as Hope van Dyne, the “Ghost,” Michael Douglas as Hank Pym, and Michelle Pfeiffer as Janet van Dyne.[ANDY PARK]

Q. Tell us how you work toward making fictional comic book characters come to life.

A. My team and I design [and] paint many different versions [of each character] and I bring all the artwork to the meeting room where we meet once every week to show them around to the directors and producers. We show our designs on the screen and they get to judge it however they want. They may want to alter some parts, so after I get feedback from them, we may go back-and-forth a bit to adjust the details. Sometimes it takes months to complete one design.

After that, I work with the costume designer who is the one who has to make it real. I work with her and try to figure out how to get my painting onto a real person, so then we discuss what kind of material we should use. Eventually we do costume fittings so I go with the costume designer, the actor and the work-in-progress costume, and then we take notes about what needs to be adjusted, taking comments from the actor. The actor might say “Oh it’s too tight here, I can’t move,” so we have to figure out how to work that out, which takes about another couple of months.

Actually, this was the case for Brie Larson in “Captain Marvel.” Since she does a lot of action, she needs to be very comfortable in her costume. One of the early costumes was really tight and it looked really good on her. But Larson told us that she couldn’t move. So although she looked amazing, we had to make the costume looser and baggier. The problem then was that it didn’t look as good because of the wrinkles, so we had some difficulty finding the right material and coming up with the final version.

That sounds like a lot of work. How long does it take on average to get all of this done?

On average, one character’s concept design painting takes about one to two months. For the real costume to be made and fitted, that takes another three to four months.

Besides character design, we also need to do key frames, which is a single illustration that depicts a singular moment of the scene. For example, if the directors want to see a shot of Ant-Man fighting Ghost in “Ant-Man and the Wasp,” I’ll paint that and show the frame to them so they have an idea of how that scene would be depicted in the screen. Then they can communicate with all the other departments to bring [the scene] to life. That is why we need to know all the story lines, and I guess in some ways we know more than actors.

How and where can you get insight for your designs?

We always begin with comic books, of course, as they contain decades and decades worth of work. We look at the comic books and history, and a lot of these characters were drawn in different costumes and in different ways. They have evolved as time has gone by, so we look at all the comics and try to think of what to extract as we start coming up with ideas about what kind of story we are telling.

The film is not exactly like the comic books. We’re creating this whole new fiction based on the comics. For instance, for Ant-Man, I knew that suit was going to made by Hank Pym in the ’60s and Ant-Man was going to wear it in 2015, so I have to make it look like it was old but not clunky. I mean, it will be nothing like Tony Stark’s sleek suit. I have to make it vintage but not ridiculous, because it still has to look cool in today’s standards. It was difficult to create that right adjustment but that’s the fun in trying to design and create that look. It’s telling a story through the costume.

Why did you want to draw concept art? I saw your resume, and there have been some changes in your career. Was there any particular reason for you to go from comic art to concept art?

While I was drawing comic books, there was barely any internet. It [really] vitalized in early 2000. There were more and more artists who started to do digital painting who posted their artworks online. When I saw their works, I knew that’s what I wanted to do. When I was learning how to paint at the ArtCenter College of Design, I realized that I like coloring and painting more than just doing line works in comics.

Overall, comic books were like my first love. I grew up in the ’80 and ’90s when comic books were meat for teens. I first discovered comic books when I was in junior high, and I fell right in love with them, and I was in love with the Marvel Universe too. So back then it was my dream to draw comic books. And to finally to work for Marvel films years later - this is what I always wanted to do. It’s very surreal and I’m definitely very proud and happy.

Illustrations for “Ant-Man and the Wasp” on left and “Captain Marvel” on the right. Park confided that they were his favorites because they were the ones he’s dedicated the most time to.[ANDY PARK]

I understand that having an in-house artist team is very rare in the film industry. What made Marvel decide to have this team in their company?

Yes, for animation studios like Disney and Pixar, it’s common to have an in-house artist team, but for live-action films, it’s very unique.

Marvel decided that they wanted to create an in-house group of artists because they’re creating a series that is connected. It’s definitely a very rare case in Hollywood. There’s total six of us - five concept artists and one 3-D modeler.

For big-scale movies like the Avengers series, we hired a lot of freelance artists to help us do the work. For “Infinity War” and “Endgame,” there was a group of 20 artists on the job.

How would you describe the man behind it all, Kevin Feige?

I always compare him to Steve Jobs. Apple also started off very small but now it’s the biggest conglomerate in the computer world. Feige also started off small with a vision - he wanted to create a movie series that was connected. Everyone else said that it was next to impossible, to have all of these main characters in one movie. But now, that movie seems so small compared to “Endgame.” But he stuck with his vision, which makes all the difference in the world.

It’s so great to work for someone that you believe in. Although he might not always pick my design, he knows what he’s doing. I don’t think that every leader knows what they’re doing. They might have the power but they don’t understand. But he gets it. He’s a comic book fan, but more than that he knows how to make movies, so he has that perfect combination.

Are you saying that the entire MCU series is envisioned in his head and he’s realizing it through the team?

Yes and no. Of course, he’s not like a tyrant, he is very collaborative. He trusts those who work for him but he has a way of seeing things when he knows that something’s wrong or needs to be improved.

I think the good example of that is after they did Iron Man, Thor, Captain America, that was a big risk to do Avengers, but then Avengers turned out to be a huge success. Many other companies would have been eager to replicate that success through making more Avenger films.

After the first hit, Feige came up to our department and said “We’re going to do Guardians of Galaxy.” Our team was confused. (laughs) Even though I’m a Marvel fan, I’ve only just heard of their names. I knew there was a tree and a talking raccoon but nothing more. But that shows you: he saw something bigger. He saw potential in what most people won’t see. Even I thought [starting Guardians of Galaxy series] was a risky move.

But I think the great thing about what he’s doing is, he’s not reinventing the whole thing. He’s doing what comic books have been doing for decades - there’s the Iron Man comic book, the Captain Marvel, Thor, Captain America … and there’s also the Avengers and sometimes they all just have this big event where all the characters come together and they fight Thanos. It already happened decades ago. Feige is basically just taking that model and putting it in cinema. It’s never been done before in cinema, but that was a risk he took. Marvel takes a lot of risks based on their whole history. They try doing things differently.

Is there any way you could spill the beans about the next Marvel project you’re working on?

I’m currently working on four projects - two TV shows for Disney Plus and two films, which I’m not allowed to talk about (laughs). I’m doing a lot of juggling right now for phase 4. Phase 4 starts after “Spider-Man: Far from Home,” which comes out this summer.

It’s the start of a new beginning because up to now, for the last three phrases it was leading up to Thanos. So I know that people are wondering about what will happen next, which I think Feige will announce sometime soon …

Fans may be aware that Disney recently bought Fox Corporation, which has the movie rights for X-Men and the Fantastic Four. So we’re finally getting some of the characters back, but like I said before, they’re only possibilities now, because nothing’s been announced yet.

What I can tell you, though, is that the future is very bright for Marvel. We have endless potential and resources from the comic books, and I hope fans will be prepared for whatever comes next.