Can Bassiona Amorosa change the world?: A double bass quartet hopes to shift perceptions of the large instrument

Can Bassiona Amorosa change the world?: A double bass quartet hopes to shift perceptions of the large instrument 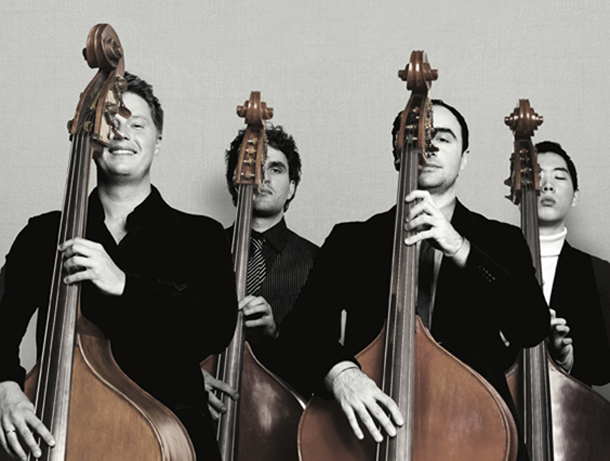 Bassiona Amorosa, a double bass ensemble formed by German double bassist Klaus Trumpf, will be embarking on its first tour of Korea beginning on May 17 with stops in four cities. [HBWS]

When most classical music fans hear that a quartet will be performing a concert, they conjure up an image of four musicians playing different instruments, typically a piano, violin, cello and perhaps a clarinet, oboe or flute. So it may come as a surprise that the next big name quartet set to tour Korea will be made up of four double bassists from around the world who perform as the ensemble Bassiona Amorosa.

The group was created in 1996 by a German double bass virtuoso Klaus Trumpf. He gathered some of his talented students from across the globe who were studying at the State Hochschule fur Musik in Munich, where he was teaching as a professor between 1994 and 2008, to form the ensemble, which began with four members and has since grown to eight. The members of Bassiona Amorosa are now all prominent professors or solo artists working in different parts of the world, but the group’s current leader, Korean musician Sung Min-je, managed to gather four members together for this unique upcoming tour.

Starting on May 17 at the Goyang Aram Nuri Arts Center in Gyeonggi, the four artists will be carrying double basses that are as large as themselves on their backs and moving to different venues, including the Seoul Arts Center on May 18; Gimhae Arts & Sports Center in South Gyeongsang on May 24 and lastly the Andong Culture & Art Center in North Gyeongsang on May 25. The members who will be performing during the Korea tour include Korean double bassist Sung, as well as Roman Patkolo of Slovakia, Ljubinko Lazic of Serbia and Jan Jirmasek of the Czech Republic. Trumpf will also be visiting Korea during the tour. The ensemble will perform various pieces for the double bass and Ukrainian pianist Lilian Akopova will be accompanying the four men on stage for several works.

Prior to their tour, the Korea JoongAng Daily interviewed the four bassists, the pianist as well as Trumpf via email to hear more about their upcoming concerts. The following are edited excerpts.

Q. How was Bassiona Amorosa formed and what does the name mean?

Patkolo: The name comes from G.Bottesini’s “Passione Amorosa.” It was formed in Munich while [we were] studying with Professor Trumpf, who also [named] the ensemble. He made all the music arrangements and organized the ensemble. He is still the mentor and director of the ensemble.

I believe each of you perform as solo artists in different parts of the world. Can you each introduce where you are based and what you mainly do?

Sung: We all studied under Professor Trumpf at the State Hochschule fur Musik in Munich and then scattered across the country after graduation. I’m based in Seoul working as a solo artist. I’ve accompanied numerous orchestras and am attempting to perform at not only classical concerts but for other genres as well.

Patkolo: I am based in Zurich, Switzerland. I am member of the Philharmonia Zurich and I also hold a professorship at the Music Academy in Basel.

Lazic: I am based in my homeland, Serbia. I work in the Belgrade Philharmonic Orchestra as a principal and in Faculty of Arts in Nis as a professor. I also run my own school for young musicians where they can [learn] bass, violin, guitar, piano, flute and the Serbian traditional instrument called tambura.

Jirmasek: I live in Karlovy Vary, Czech Republic. I [am the] leader of a bass group in the Karlovy Vary Symphony Orchestra and I teach at four different Czech music schools

Akopova: The men of Bassiona have almost all been my students at the College of Music and Theater in Munich. We know each other since then. Unlike most of the bass players, who went to other countries, I stayed in Munich and continue to teach at the conservatory in addition to my solo and chamber music career.

It must be quite difficult to perform, let alone get together, since the members are scattered across the globe. How many years ago was your last concert together? How was this Korea tour organized?

Trumpf: Our last concert was in February in Berlin. Because the members of Bassiona Amorosa are very international and come from different countries, it is indeed very complicated to come together. Can you believe that seven members come from six countries? But with good organization we make it possible and try to hold between 10 to 20 concerts a year.

Sung: I remembered Professor Trumpf talking about his memories of Korea while he was here nine years ago. I wanted to invite him once again and introduce the ensemble to Korean audiences. I think in Korea, I’ve worked for quite some time to change the perception people commonly have about the double bass - which is that it should be positioned in the back row of an orchestra. I think I’ve held quite a lot of solo performances so I think it is time to show some more diversity. That is why I decided to organize this tour and invite the ensemble over.

Patkolo: My last concert with Bassiona Amorosa was at the Berlin Philharmonic Hall in 2016. I used to play with this ensemble as one of the main members for many years and its always a joy for me to come back and play with them.

Lazic: The four of us have not played together for a long time. This tour is a great opportunity to get together and play some music.

Jirmasek: Bassiona Amorosa’s last concert was on Feb. 16 in Berlin with other players, but Min-je, Roman and I haven’t played for a really long time ... I am very much looking forward to meeting them and playing with them again!

Akopova: We used to play regularly together and take fantastic trips in Germany and abroad. As we now prepare to perform in Korea, this is going to be a highlight for us. But, even today, we come together from time to time for a concert arranged by Professor Trumpf, mostly in Germany.

The sound of a double bass is familiar to most people because it is commonly seen in orchestras or at jazz bars, but it is difficult to imagine four double basses performing together as an ensemble. What does it sound like?

Sung: The audience will be able to hear softer tunes when four of us are together. Moreover, four double basses on one stage is not only great to hear but amazing to look at.

Lazic: Our instrument has endless possibilities as an orchestral and a solo instrument. However, it has not been developed enough as a solo instrument. We are trying to improve this and bring out the true sound of the double bass through our ensemble.

Trumpf: In a bass quartet, you can play very different music styles, from baroque music to jazz.

Sung: Because the double bass has such a wide range - it is able to play high notes as well as low notes - when four of them take different parts and play together, it creates such great music.

Akopova: Most people don’t expect that a combination of double basses results in a real chamber music sound and mixes perfectly with the sound of the piano in a series of pieces.

What is the biggest misconception people in your country have of the double bass?

Trumpf: People think the double bass can only play [as an] accompaniment and nobody thinks you can play fantastic melodies [or other] music styles. But if they have listened to Bassiona Amorosa, they think [differently].

Patkolo: That it is an elephant.

Lazic: The biggest misconception in my country is that bass is only an orchestral instrument.

Akopova: Most concertgoers at big concerts do not know that the bass, if played masterfully, has chamber music qualities. This applies to all people in all countries, but Professor Trumpf has made a point of trying to change that wherever Bassiona Amorosa plays a concert.

In Korea, the double bass still has a long way to be seen as a solo instrument. Have you seen this perception change in other countries?

Trumpf: After people attend a Bassiona Amorosa concert, they come to realized that the double bass is a very interesting instrument. All the concerts of Bassiona Amorosa end with standing ovations. It even did in the Carnegie Hall in New York.