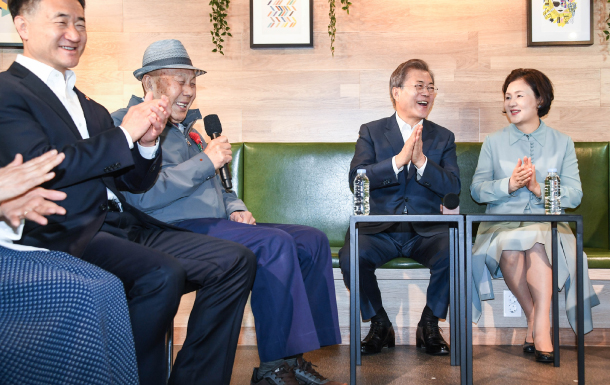 President Moon Jae-in, second from right, talks with seniors at a center for people suffering from dementia on Tuesday, before Parents’ Day, which falls today. Moon took a low-profile response to the North Korean regime’s latest military provocation, attending domestic events and not holding a national security meeting on Tuesday. [JOINT PRESS CORPS]

President Moon Jae-in on Tuesday took a low-profile response to the North Korean regime’s latest military provocation, as he attended domestic events and did not hold a national security meeting.

Moon visited a care center for the elderly suffering from dementia on Tuesday, before Parents’ Day, which falls today. He also hosted a Children’s Day event on Sunday at the Blue House, one day after the North fired a volley of unidentified short-range projectiles from its eastern coast into the East Sea. The North called the Saturday’s event a “strike drill” conducted under the supervision of its leader, Kim Jong-un.

Despite the latest military provocation, Blue House officials were silent about the situation, leaving media briefings to the National Intelligence Service and the Ministry of National Defense. Moon did not host a National Security Council meeting, although key officials at the Blue House met Saturday morning to monitor the situation.

The Blue House said Tuesday that Moon is scheduled to have a phone conversation with U.S. President Donald Trump later at night.

“The two leaders will exchange opinions about how the situation on the Korean Peninsula developed since their April 11 summit,” said Ko Min-jung, Moon’s spokeswoman.

A senior Blue House official said Moon and Trump are expected to discuss the North’s rocket test on Saturday, as well as measures to improve the current situation. Yet she refused to say whether the South communicated with the North about its test.

While announcing the plan for Moon’s phone call with Trump, it became apparent that the Blue House was trying not to provoke Pyongyang.

The presidential office’s brief statement on Saturday only urged the North to stop any action that will increase tensions on the Korean Peninsula and to return to dialogue. The Blue House and other government agencies also did not characterize Saturday’s event as a missile launch. Instead, they used the terms “rockets” and “projectiles.”

The Blue House also made clear that it does not see the latest development as a military provocation, although opposition politicians said Pyongyang had smeared Moon’s peace campaign. Rep. Na Kyung-won, floor leader of the main opposition Liberty Korea Party, called Moon a “liar” for claiming that Korea has been freed of the North’s provocations.

In an op-ed that will be published in the German newspaper Frankfurter Allgemeine Zeitung, Moon wrote, “Most importantly, the sounds of gunfire have disappeared in the air, on the sea and on the ground around the Korean Peninsula.” The Blue House released the full text of the piece on Tuesday.

“Moon said the sounds of gunfire have disappeared on the Korean Peninsula,” Na said. “The president is complacent although the world is shocked by the North’s threat and provocation.”

She also said Moon’s op-ed piece was a lie that has embarrassed the Korean people.

“When we used the expression ‘the sounds of gunfire,’ we would mean a provocation,” said the senior Blue House official. “When we issued a briefing on Saturday, we never identified the situation as a provocation.”

The announcement of Moon’s scheduled phone discussion with Trump was made amid concerns that Seoul has become an outcast in the international diplomatic process on the North Korea issue.

“President Trump and I had a perfect agreement on how to deal with North Korea issues in the future,” Abe told reporters on Monday after his 40-minute talk with the U.S. president.

It was the leaders’ 30th phone conversation since Trump took office in January 2017. They had a summit in Washington on March 27 and played golf together the next day. Trump is also scheduled to visit Japan from May 25 to 28 as the first foreign guest of new Japanese Emperor Naruhito.

“I also share understanding with Russian President [Vladimir] Putin and Chinese President Xi Jinping about the denuclearization of the Korean Peninsula and the [need to have a North-Japan] summit,” Abe told reporters after his phone call with Trump. He, however, did not mention President Moon.

According to the Japanese Prime Minister’s Office, Abe told Trump about his intent to hold a summit with North Korean leader Kim without any precondition. Although it refused to elaborate on Trump’s response, it is belied that Trump supported the idea, because Abe and Trump were said to be in complete agreement on all issues regarding North Korea.

Japan also maintained that the North’s latest action was not a threat to its current security, hinting that Abe wanted to create a favorable mood for a summit with Kim. When asked why Moon would be talking to Trump one day after Abe’s call, the Blue House said Tuesday it wanted to have a discussion based on an accurate primary analysis. The Blue House, however, said Seoul has not completed the assessment as of Tuesday.

“It is going too far to say why we are having the [phone call with Trump] after Japan,” the Blue House official said, adding that defense and foreign ministries of Seoul and Washington have cooperated consistently.

She also stressed that Moon and Trump have maintained close relations. “The upcoming call is their 21st phone conversation,” the official said. She also said that Moon had seven summits with Trump during his two years in office.