Lee will be Korea’s 4th NCAA Division I baller

Lee will be Korea’s 4th NCAA Division I baller

A Korean teen basketball prospect will join an NCAA Division I school this fall, poised to become just the fourth player from the country and the second male to appear in the top U.S. collegiate competition. 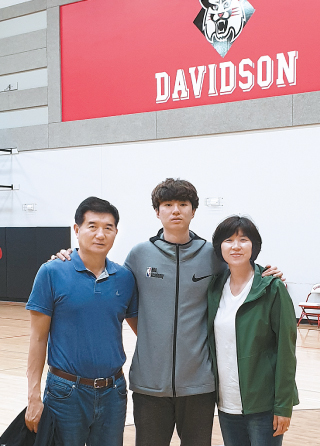 Lee Hyun-jung, center, poses for a photo with his parents at Davidson College. [LEE HYUN-JUNG]

Lee Hyun-jung, a product of the NBA Global Academy in Canberra, Australia, last week uploaded on Instagram a picture of himself signing a letter of intent to join Davidson College.

Located in a North Carolina city that shares the school’s name, Davidson is the alma mater of Stephen Curry, a two-time NBA MVP for the Golden State Warriors.

Lee, 18, comes from a basketball family. His mother, Seong Jeong-a, was a member of the silver medal-winning Korean team at the 1984 Los Angeles Olympics. His father, Lee Yoon-hwan, played semi-pro hoops, while Hyun-jung’s older sister, Lee Ri-na, once played on the national under-16 team.

Lee Hyun-jung, a shooting guard listed at 201 centimeters (6 feet 7 inches), picked up basketball in fourth grade. He stayed in Korea through his second year in high school before moving to Australia in January 2018.

Seong, who is now an athletic director at a local high school, said Wednesday his son was offered an opportunity to join the NBA Global Academy when he attended an NBA camp in China in June 2017.

Last August in Thailand, Lee was the leading scorer at the FIBA U18 Asia Championship, with an average of 26 points per game. He also dished out a tournament-best six assists per game and grabbed 10.3 boards per game.

Seong said the family visited the campuses of both Davidson and Washington State University before making the decision. Incidentally, Lee’s favorite player is Klay Thompson, the other half of the Warriors’ Splash Brothers with Curry and a Washington State product.

“He was really excited to have received an offer from Washington State because it’s Klay Thompson’s school,” Seong said. “But he decided Davidson had the program that suited him the best.”

The lanky guard with long arms is only listed at 86 kilograms, or just under 190 pounds. Seong said her son will eventually fill out much the same way she did once she started training under a more structured system with the national team.

Lee’s parents have been trying to prepare him for the academic and language challenges that lie ahead of him at one of the top colleges in the United States.

Seong said: “He isn’t a bad student. He may not become an honors student, but he won’t be on academic probation, either.”