Ryu shuts out Braves for another big win

Ryu shuts out Braves for another big win 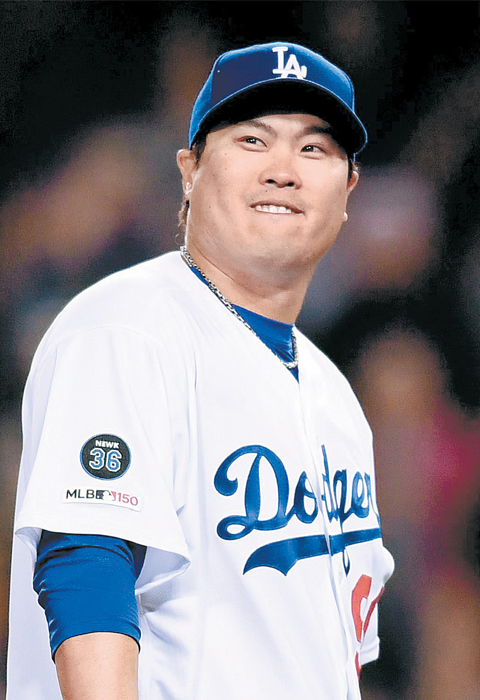 Ryu Hyun-jin of the Los Angeles Dodgers reacts after tossing a complete game against the Atlanta Braves at Dodger Stadium on Tuesday. [REUTERS/YONHAP]

Like Dorothy before him, Ryu Hyun-jin is quickly proving that there really is no place like home.

Ryu tossed a complete game in his seventh game of the season against the Atlanta Braves on Tuesday, picking up his fourth win. All four of those wins came at Dodger Stadium.

Ryu got off to a great start by getting three outs in the first inning with just nine pitches. Until the fifth inning, Ryu was well on pace for a no-hitter as he didn’t allow a single batter to get on-base.

However, that no-hitter streak was broken at the top of the sixth, when he allowed Tyler Flowers to get a hit. Ryu still completed the inning without giving up a run.

With just one more out needed to close down the game, Ryu gave up a two-base hit to Josh Donaldson. However, the Braves weren’t able to capitalize on the opening as Ryu quickly struck out Freddie Freeman.

“It was good to watch Hyun-jin do his thing,” Dodgers manager Dave Roberts was quoted as saying on MLB.com. “Complete domination tonight. His feel, to strike the breaking ball, has always been elite. It’s hard to say he’s under the radar, but he’s an elite pitcher in baseball. It makes it fun to sit back and watch.”

Throughout nine innings, Ryu gave up four hits but no runs or walks while striking out six. Ryu tossed 93 pitches. Ryu has now picked up four wins and a loss with a 2.03 ERA this season.

“I want to be a pitcher my teammates can depend on every five days,” Ryu was quoted as saying on MLB.com. “And I will put more effort in so I can start every five days.”

A win after a complete game is also a shot at redemption for Ryu. In his last game against the San Francisco Giants on May 2, he tossed eight innings, giving up only one run but had to walk away with a no-decision as the Dodgers lost the game.

Unlike that game, where the Dodgers’ batters struggled to score a run, Ryu was provided plenty of run support throughout Tuesday’s game.

The Dodgers got off to a quick start by scoring four runs in the first two innings. By the eighth inning they were up 5-0, and an additional four runs ensured victory.

Along with Ryu’s first complete game of the season, he also had his first hit during the game.

“He’s very underrated,” Turner was quoted as saying on MLB.com. “Very underrated, and I think he kind of likes it that way. He wants to show up, do his job and doesn’t care about the accolades, but he deserves them all.”

This is the first time since May 28, 2013, against the Los Angeles Angels that Ryu has tossed a complete game in his major league career. That game, like this one, was a shutout. Also, by picking up a win against the Braves, Ryu has now picked up a win against every club in the National League.

Complete games are uncommon in the MLB. Ryu’s win on Tuesday is only the ninth complete game in the Majors this season and the first by a Dodgers pitcher since 2016.

“He’s been so good, so many different times,” Roberts was quoted as saying on MLB.com. “But tonight he reached back for 92 [miles per hour] when he needed it and he could have kept going.”

This season is turning out to be one of the best of Ryu’s career. He first started in the opening game against the Arizona Diamondbacks at Dodger Stadium and picked up a win, becoming the first Korean pitcher since Park Chan-ho in 2001 to pick up a win in an opening game in the major league.

Then, he picked up another against the Giants on April 2. Although Ryu briefly left the Dodgers’ starting rotation due to a recurring left groin injury, he didn’t waste much time getting back on the mound.

Looking at Ryu’s statistics this season, he is showing great control in his pitches, as he has only given up two walks while tossing 44 and one-third of an inning.