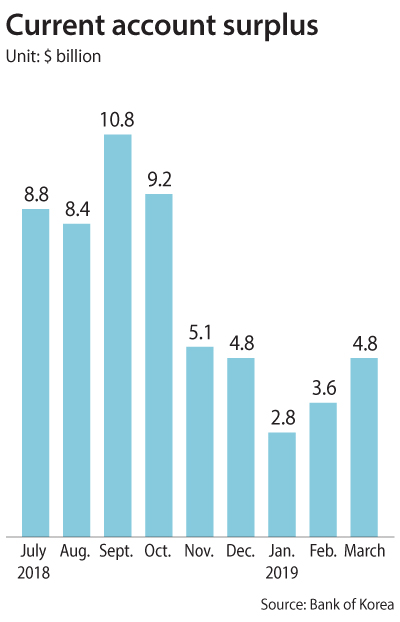 Korea’s current account surplus remained in the black for the 83rd consecutive month in March, but the outlook isn’t rosy as the surplus hit a six-year low in the first quarter.

March’s current account may have been a surplus, but a number of indicators suggest trouble ahead — the first quarter’s accumulated current account surplus was the smallest in more than six years and the central bank has raised the possibility of the surplus turning into a deficit.

However, the current account surplus rally could be coming to an end especially since exports are showing a sharper drop than imports, and the trend could continue with the current momentum.

March’s current account surplus is an improvement compared to the first two months of the year, but the accumulated surplus for the quarter is the smallest in six years.

The accumulated account surplus between January and March of this year amounted to $11.25 billion. This is the smallest surplus since $10.94 billion in the second quarter of 2012.

Although April’s exports have seen a slight improvement, the outlook is still unfavorable as computer chip sales continue to fall and exports to Korea’s biggest export market, China, shrink.

This is a huge turnaround from last year, when Korea reached a milestone as its annual exports surpassed $600 billion for the first time. But since the beginning of this year, as exports decline, there have been growing doubts as to whether Korea will be able to duplicate last year’s success.

The BOK even raised the possibility that Korea’s surplus rally may come to an end by next month.

“In April, there’s a possibility that the current account could make a small surplus or turn to a small deficit,” said Park Yang-su, director general of the economic statistics department at the BOK.

With recent economic indicators turning unfavorable, Finance Minister Hong Nam-ki on Wednesday once again called for lawmakers to approve a 6.7 trillion won ($5.7 billion) supplementary budget that has been sitting at the National Assembly since April 25.

“With recent global economic conditions worsening more than previously expected, economic downward risk expansion is in a serious situation,” Hong said, hinting at the recent trade conflict between China and the United States. The conflict is escalating as U.S. President Donald Trump has threatened to increase tariffs on Chinese imported goods while the Chinese government reportedly has no plans of backing down.

Hong added that the government will come up with innovative strategic measures to bolster the manufacturing and service industry later this month.