Making reality television isn’t all fun and games: Producers talk about the struggles of casting and developing original content

Making reality television isn’t all fun and games: Producers talk about the struggles of casting and developing original content 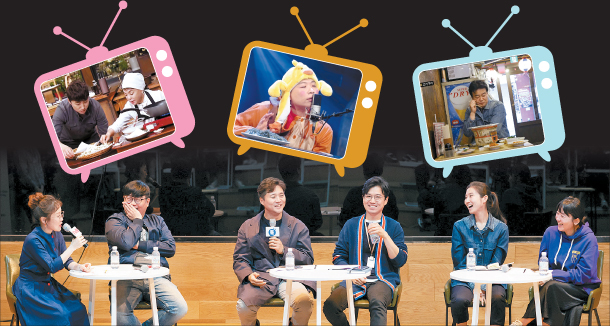 Reality show producers from television channel tvN discuss their jobs and the industry during the “Creator Talk” event at the CJ ENM building in Sangam-dong, western Seoul, on Tuesday. Pictured above are some of the channel’s shows, including “Mother’s Touch,” “Comedy Big League” and “Street Food Fighter.” [TVN, SCREEN CAPTURE]

As it is all around the world, reality television in Korea offers viewers a much-needed escape from their everyday lives.

Audiences here can tune in to several dozen reality shows to get their daily dose of laughter or live vicariously through their favorite celebrities as they cook or travel the world. For many, it’s the one time of the day that they get to relax and forget about work.

But for TV producers - commonly known as PDs in Korea - creating reality television means a lot of stress and unforeseen challenges.

On Tuesday, five PDs behind some of Korea’s hottest reality shows on TV channel tvN got together at the network headquarters in Sangam-dong, western Seoul, to share with local press what really goes on behind the scenes. They also addressed common viewer complaints and voiced their thoughts on competition from creators on YouTube.

If there’s one thing they all can agree on, it’s that being a PD is not an easy job.

“[Being a PD] is really tough, and I think a lot of it has to do with responsibility,” said Jeong Jong-yeon, who directs “The Great Escape,” a show where celebrities try to escape from puzzle-ridden rooms by solving riddles. “At night, I sometimes can’t sleep because I’m worrying that we won’t be able to film according to plan and that I’ll embarrass myself in front of all my colleagues.”

Moon Tae-joo, who directs the popular cooking program “Mother’s Touch: Korean Side Dishes,” said it’s the ratings that stress him the most.

“If my show airs on Wednesday, the ratings are automatically sent to us by email the next morning,” said Moon. “On the days the ratings come out, I wake up as early as 5 a.m. If they’re high, I feel happy, but if they drop from the previous episodes, I get discouraged.”

The directors took the event as an opportunity to address two big elephants in the room - casting celebrities with a criminal past and complaints that reality shows on tvN are too similar, with many that are based on food, travel or a combination of both.

His low-budget travel series “Salty Tour” faced controversy for casting celebrities of questionable character like Jung Joon-young, the singer who admitted to distributing sex videos he filmed of women without their consent, and Kim Saeng-min, who sexually harassed a staff member while filming another program in 2008. Both Jung and Kim had been regular members in “Salty Tour.”

“As producers, we have a responsibility [for selecting cast members],” said Son “I think it’s important to set criteria and standards for verifying them. We are trying to create a platform for PDs so we can share information and not cast problematic celebrities.”

The PDs also responded to growing complaints that most tvN reality shows were becoming replicas of one another since celebrity cooking show “Three Meals a Day” aired its first episode in 2014 to tremendous success. Many of tvN’s subsequent food-related shows, such as “Youn’s Kitchen,” “Coffee Friends,” “Miss Korea” and “Korean Hostel in Spain,” all involve Korean celebrities going abroad or to an idyllic place like Jeju Island to cook for regular customers or guests.

“‘Mother’s Touch’ is not just another mukbang program,” said Moon. “When I first conceptualized the program with Kim Su-mi, we wanted to add a story to each side dish. …
We wanted to incorporate that longing for our mother’s food in each episode.”

On the show, veteran actress Kim Su-mi demonstrates how to make common side dishes, or banchan in Korean, to a cast of famous celebrity chefs.

“There are comments from viewers that they’re tired of seeing food and travel programs, but I think the shows share universal themes,” said Son. “As someone who needs to create a show, my focus is on using elements that viewers like, rather than copying other PDs.”

According to Son, he gets ideas for shows while traveling abroad and during drinking sessions with younger colleagues.

In one of the show’s regular skits, a comedian parodies mukbang ASMR, a popular variation of mukbang on YouTube where vloggers usually eat something crispy or crunchy while whispering.

“A lot of comedians watch YouTube videos while waiting on set and operate their own YouTube channels,” said Kim. “We sometimes get good ideas from YouTube to incorporate into our show.”