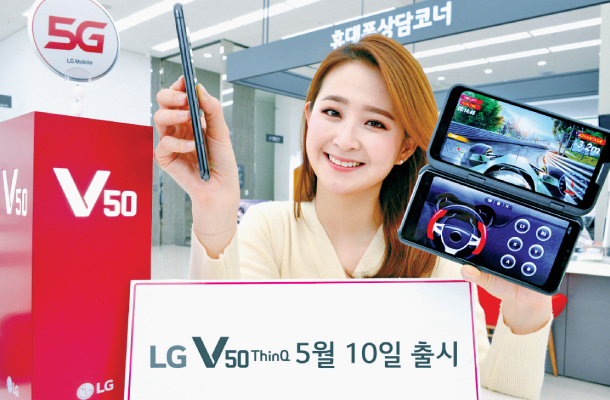 A model holds up LG Electronics’ first 5G phone, the V50 ThinQ, with an attachable flip cover that enables the device to be used with two screens. [LG ELECTRONICS]

The V50 ThinQ will be the second 5G smartphone in Korea after Samsung Electronics’ Galaxy S10 5G. Priced at 1.19 million won ($1,016), the phone will be available from all three mobile carriers - SK Telecom, KT and LG U+ - e-commerce sites and LG Best Shop, LG’s electronics retailer.

Preorders in Korea were opened for two days until today. Customers who preordered the phone also get a special one-year warranty on the screen, allowing them to change their device, free of charge, if the screen breaks within 12 months after purchase. This benefit will also be offered to those who purchase the V50 before May 13.

LG previously postponed the V50’s launch date, which was originally set for April 19, saying it wanted to optimize the device to improve the 5G connection.

The announcement came at a time when disappointed consumers were complaining about Korea’s 5G service - at the time exclusively available with the Samsung S10 5G. Users said that the network wasn’t working everywhere the mobile carriers said it should and phones regularly reverted back to the 4G LTE network.

LG has high hopes that its first 5G phone will help lift the company’s phone business out of the red. As of this year’s first quarter, the phone business has seen operating losses for 16 quarters straight.

Consumer demand for 5G phones was higher than expected for Samsung’s Galaxy S10 5G, even though the same phone was also available in a 4G LTE model a month earlier and despite expert warnings that the 5G networks would be unstable in their early days.

It remains to be seen if interest in 5G will boost sales of the V50 ThinQ.

“Samsung and LG Electronics are the only manufacturers that will be able to supply 5G-supporting handsets in Korea and the United States in this year’s first half,” said Seo Dong-myeong of LG’s smartphone business division during a conference call last week.

Currently, Motorola also offers its 5G Moto Z3 in the United States, but it requires a separate plug-in 5G modem to connect to the new network.

Seo also expressed anticipation that being a fast mover in these two markets will expand LG’s chance of winning big in the 5G market.

To boost early demand, LG will offer its dual screen cover to V50 ThinQ customers free of charge until late June. Originally priced at 219,000 won, the accessory is a 6.2-inch OLED screen with a frame that is attached to the side of the V50.

The LG V50 ThinQ is powered by Qualcomm’s Snapdragon 855 5G processor and comes with a 4,000 milliampere hour battery. It is expected to be released in the United States and Europe during this year’s first half.