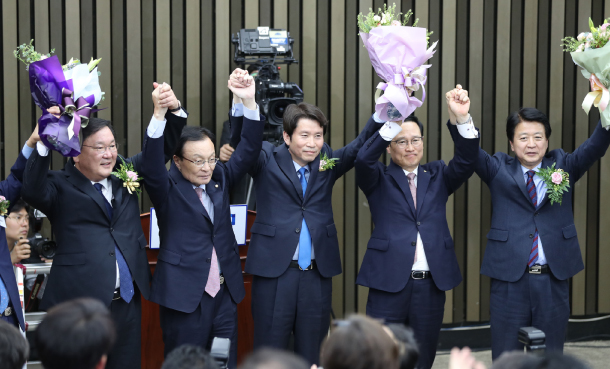 Lee, who represents Guro A District in Seoul, won 76 votes in a run-off round to win the chief negotiator position of the ruling party, which commands 128 lawmakers in the National Assembly. Rep. Kim Tae-nyeon scored 49 votes in the run-off round.

Lee’s victory was a surprise because many predicted that Kim, an ally of President Moon Jae-in, would win. Since Moon took office in May 2017, Kim has served as the ruling party’s chief policymaker and routinely worked with the Blue House to coordinate policies and bills.

While Kim had promoted his connections to the Blue House, Lee told fellow DP members that he would ensure that the party will be in control. Lee’s election, therefore, signals a new relationship between the presidential office and the ruling party as Moon enters the third year of his presidency and ahead of a general election next year.

Lee, 54, was a prominent student activist in the 1980s. He was the first chairman of the National Council of Student Representatives, an anti-government student activist group established in 1987. He also served as president of Korea University’s student association in 1987.

He was one of the leaders of the June Democracy Movement, a nationwide demonstration from June 10 to June 29, 1987, resisting President Chun Doo Hwan’s decision to designate Roh Tae-woo his successor. The protesters demanded a direct election of the president.

Following the demonstrations, Chun and Roh acceded to the protesters’ demand, and in December that year, Roh was elected president.

Lee started his political career in 2000 when President Kim Dae-jung created the Millennium Democratic Party and recruited new politicians. He was first elected as a lawmaker by Seoul’s Guro A District in 2004, but failed to win re-election in 2008. He was elected again by the district in 2012 and again in 2016.