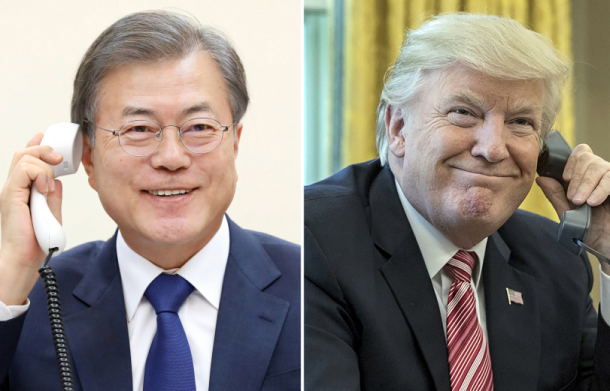 South Korea made it official that it wants to offer food aid to North Korea despite the Kim Jong-un regime’s weekend military test, following a phone conversation between President Moon Jae-in and U.S. President Donald Trump.

The Ministry of Unification said Wednesday that the government will cooperate closely with the international community to push humanitarian food assistance to the North. The announcement by ministry spokesman Lee Sang-min followed an earlier Blue House briefing about Moon and Trump’s discussion of the issue in a phone conversation Tuesday night Seoul time.

Unification Minister Kim Yeon-chul said Wednesday he will call a meeting with ministry officials to follow through on the discussion between Moon and Trump. “We will review the issue comprehensively and make an announcement,” Kim said at the inter-Korean border as he returned from a visit to Kaesong. “When a specific plan is created, we will tell the press.”

Moon and Trump had a 35-minute discussion Tuesday night following North Korea’s firing of a volley of unidentified short-range projectiles from its eastern coast into the East Sea on Saturday. The North called the event a “strike drill” conducted under the supervision of its leader Kim.

“Moon explained the Korean government’s position on the North’s launch of short-range projectiles, including a tactical guided weapon,” Ko Min-jung, the Blue House spokeswoman, said Tuesday night. “The two leaders discussed plans to resume denuclearization negotiations as soon as possible, while keeping the North within the track of denuclearization dialogue, despite the latest launch.”

Ko explained that Moon and Trump exchanged opinions on the recent reports by UN agencies on the food crisis of the North. “President Trump said it is a very timely and positive measure for South Korea to offer humanitarian food aid to the North,” Ko said, “and expressed support for the plan.”

The Food and Agriculture Organization (FAO) of the United Nations and the World Food Program (WFP) recently conducted site surveys in the North and reported that the country produced 4.9 million tons of crops last year, the lowest level in the past decade. They said the North needs 1.3 million tons of food aid to get by from November 2018 through October 2019. The White House also issued a brief statement after the phone conversation. “The two leaders discussed recent developments regarding [North Korea] and how to achieve the final, fully verified denuclearization” of the North, the statement said. Conspicuously missing, however, was any mention of food aid.

That did not stop the Blue House from elaborating further on the idea. The government is at an initial stage to begin an assessment of the North’s food needs and how and when to offer assistance, a senior presidential aide said. She, however, said Moon and Trump did not discuss any specifics.

The official refused to say if Moon had pitched the idea first or not. “It is hard for me to say who raised the issue first,” she said. “They were forming a consensus on the issue and then advanced to make a final decision on a plan.”

Asked about the disparity in the briefings of the Blue House and the White House, particularly Washington’s decision to leave out the food aid issue in its statement and Seoul’s decision to skip the “final, fully verified denuclearization [FFVD]” wording in its release, the official said there was no discrepancy.

“FFVD was comprehensively noted in the part where they discussed measures to prevent the North from derailing the denuclearization dialogue and to resume nuclear negotiations as soon as possible,” she said. “We could not say how far the United States would make public the discussion on the humanitarian food assistance. We just made public what was discussed.”

The official also said that the United States said the Korean government’s cautious response to the North’s launch was effective in managing the current situation.

Asked if the government would send food aid directly to the North or go through an international agency, the Blue House official said all possibilities will be considered.

Seoul has considered the offering of food aid as a possible way to create a breakthrough in the stalled inter-Korean and North-U.S. dialogues since the summit between Kim and Trump collapsed in February. Food aid can be sent to the North as government-to-government aid, contributions to international agencies such as the WFP or through domestic humanitarian groups.

In 2017, the Unification Ministry planned to contribute $8 million in aid through the WFP and the United Nations Children’s Fund, although it was never implemented.

The government-to-government aid, however, involves political and diplomatic risks, as the public could be critical of the Moon administration for sending aid shortly after a military provocation by the North.

The plan could also backfire if Pyongyang turns down Seoul’s official offer.

“We had precedents in which the North turned down the South’s assistance, such as fertilizer, calling it a matter of dignity,” a former Foreign Ministry official told the JoongAng Ilbo. “Unless the amount is large enough to satisfy the North, it remains to be seen if Pyongyang will accept it.”

Now that the two presidents have discussed it, the food aid issue will likely be addressed in upcoming talks between Seoul and Washington. Stephen Biegun, U.S. special representative for North Korea, was scheduled to arrive in Seoul late Wednesday and attend a series of meetings with Seoul officials, including his Korean counterpart Lee Do-hoon. He will also visit the Blue House to meet with security officials.

Asked if the food aid plan was discussed in advance to prepare for the upcoming talks, a Foreign Ministry official said, “It is a political decision at the top level.”

Although the Blue House refused to say clearly if it was Moon’s idea, sources in the government said the plan reflects the president’s intentions, and not everyone in the U.S. government is enthusiastic about offering unconditional food aid to the North. The White House’s one-sentence statement on the Moon-Trump phone conversation, issued by deputy press secretary Judd Deere, did not indicate Trump’s support for food aid.

Before his summit with Moon on April 11 at the White House, Trump still said he was willing to offer humanitarian aid to the North. “Well, we are discussing certain humanitarian things right now, and I’m okay with that, to be honest,” he said at the time. “And South Korea is doing certain things to help out with food and various other things for North Korea.”

U.S. State Secretary Mike Pompeo described the issue differently. In an interview with ABC on May 5, he said sanctions do not prevent the buying of food, and the North should use money spent on military provocations to feed its own people.

“Sanctions permit the North Koreans to purchase food products,” he said. “It’s why, when I see things like happened on Friday night, where the money could have gone to taking care of his own people, it’s so unfortunate,” Pompeo said, referring to the North’s firing of projectiles.

“Look, there was a UN report that came out on Friday, 50 percent of the North Korean population at risk of significant malnutrition,” he said, adding that “They need to understand that if these nuclear weapons go away, it will be of an enormous benefit to their country, and keeping them just continues to pose risk.”