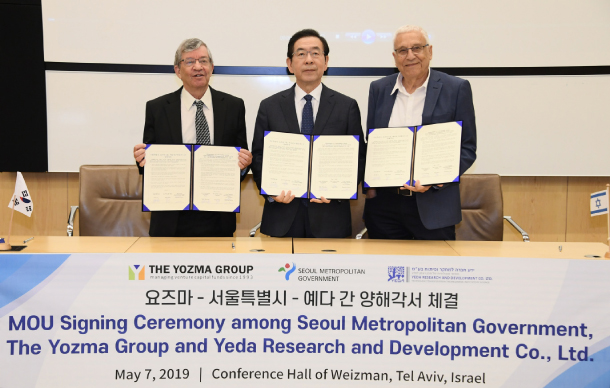 From right, Yozma Group Founder and Chairman Yigal Erlich, Seoul Mayor Park Won-soon and Mordechai Sheves, vice president for technology transfer at the Weizmann Institute, pose after signing an agreement to cooperate on building start-up ecosystems in Israel and Seoul at the institute in Israel on Tuesday. [SEOUL METROPOLITAN GOVERNMENT]

TEL AVIV - Seoul’s city government entered into an agreement with an institute in Israel that has produced a Nobel laureate to cooperate in the field of basic science and biotechnology.

On Tuesday, the Seoul Metropolitan Government signed a memorandum of understanding with the Weizmann Institute of Science’s Yeda Research and Development Company and Yozma Group, an investor in Weizmann.

“This would be the beginning of cooperation between Seoul and Weizmann,” said Mordechai Sheves, vice president for technology transfer at the Weizmann Institute at the institute in Rehovot, just south of Tel Aviv.

The three organizations will work together to create favorable conditions for start-ups in Seoul and for Israeli enterprises establishing subsidiaries in the capital city of Korea. It also involves setting up a Seoul-Yeda-Yozma research and development center in Seoul.

The Weizmann Institute was founded by Israel’s first president, Chaim Weizmann, in 1949. It now has 280 laboratories for biology, chemistry, biochemistry, physics and computer science used daily by 350 students and 200 scientists living on campus.

Funded by some 1,200 grants, research at Weizmann had a 70-percent success rate in 2017, according to the European Research Council. The institute’s Ada Yonath received the Nobel Prize in Chemistry in 2009.

“We learned at the institute today the importance of basic science,” said Seoul Mayor Park Won-soon during a meeting with Sheves and Yozma Group Founder and Chairman Yigal Erlich.

“It is only with prowess in basic science that we will be able to develop the fundamental technology that will take our economy forward.”

While specific areas of cooperation among the Israeli and Korean organizations are still being discussed, one possibility may be combating fine dust pollution.

“South Korea has severe environmental challenges today,” said Arkady Kaplan, CEO of Desulf Tech, a biotech institute cooperating with Weizmann. “I saw that South Korea has tried to use drones to monitor the air and artificial rain to wash the pollution away. However, those solutions treat the symptoms of the problem not the root cause. Our technology treats the root cause of the emissions.”

Kaplan spoke of a process of transforming sulfur dioxide in the air to elemental sulfur and decomposition of nitrogen oxygen to nitrogen.

“The transformation of sulfur dioxide into elemental sulfur can generate new revenue sources,” he said. “The typical annual savings can be $8 million per coal power plant that uses this technology to produce elemental sulfur [that can, in turn, be sold to generate revenue].”

Air quality in Seoul has worsened over the years. It was especially bad in 2019. The daily average level of PM2.5 particles in Seoul hit 135 micrograms per cubic meter on March 5, the highest since 2015, when data was first recorded in its current form. That was more than five times the World Health Organization’s (WHO) recommended exposure.

With direction from the Moon Jae-in government “to take drastic measures in drastic times,” the Korean Meteorological Administration has flown aircrafts seeding the cloud with rain-inducing iodide in the Yellow Sea, though it did not yield tangible results.

PM2.5 particles are less than 2.5 micrometers in diameter. The WHO describes them as carcinogenic. PM2.5 particles can travel through the respiratory tract and reach the bloodstream, possibly leading to lung cancer and other lung conditions, as well as heart problems and strokes.

Park and his delegation from Seoul visited Israel from Sunday through Tuesday, meeting with start-up entrepreneurs and biotech industry insiders.

“Courage is what is necessary to become a start-up nation. It is the courage to be willing to fail,” he said.

“Last year I went back to Seoul every month,” said Uriel Peled, co-founder of ORBS, a blockchain company in Israel.

“People call Israel a start-up nation. I call Seoul and Korea a blockchain nation. The blockchain ecosystem market in Korea is a good match for companies like us. We are looking forward to doing much more together.”

“I believe that collaboration between Korea’s Samsung and Hyundai and other great businesses and Israel with its excellent scientific knowledge and skills can yield fantastic results,” Park said.

During the visit to Israel, Park and his delegation also met with the mayor of Tel Aviv to discuss cooperation and visited biotech incubator FutuRx.

Park’s delegation returned to Korea Wednesday, completing an eight-day trip to Europe and the Middle East region to build city-to-city cooperation in start-ups and innovation.