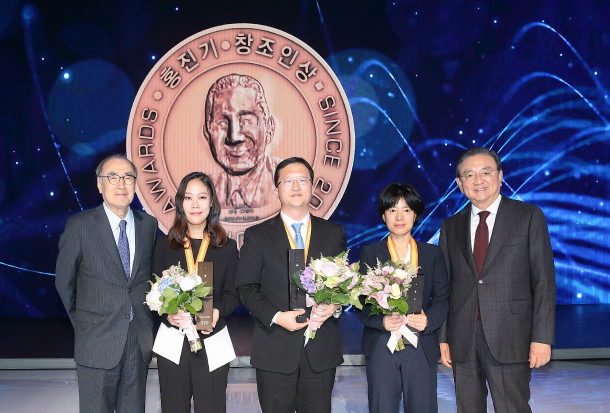 Recipients of the Yumin Awards pose for a photo after the ceremony Wednesday at the Hoam Art Hall in central Seoul. From left: Lee Hong-koo, former prime minister and current chairman of the board of the Yumin Cultural Foundation; pianist Son Yeol-eum; Choi Jang-wook, a professor at Seoul National University; Park Eun-Jung, a professor at Kyung Hee University; and JoongAng Holdings Chairman Hong Seok-hyun. [LIM HYUN-DONG]

The 10th annual Yumin Awards were held Wednesday at the Hoam Art Hall in central Seoul, where Choi Jang-Wook, a professor at Seoul National University; Park Eun-Jung, a professor at Kyung Hee University; and pianist Son Yeol-eum were recognized for their roles in advancing Korea on the global stage.

The awards are given in the fields of science, society and culture to individuals or groups who boosted Korea’s international image through their innovations.

The Yumin Awards program was established by the nonprofit Yumin Cultural Foundation in 2010 in memory of Hong Jin-ki (1917-86), co-founder and former chairman of the JoongAng Ilbo, who was active in government, business and media.

“Distinguished from existing prizes that award achievements of generations past,” said former Prime Minister Lee, “this prize focuses on the younger generation’s future possibilities in the transformation of human civilization.”

Last year’s awards were given to the Korean women’s curling team, composer Ryu Jea-joon and Park Yong-keun, professor of biomedical optics at the Korea Advanced Institute of Science and Technology (KAIST). 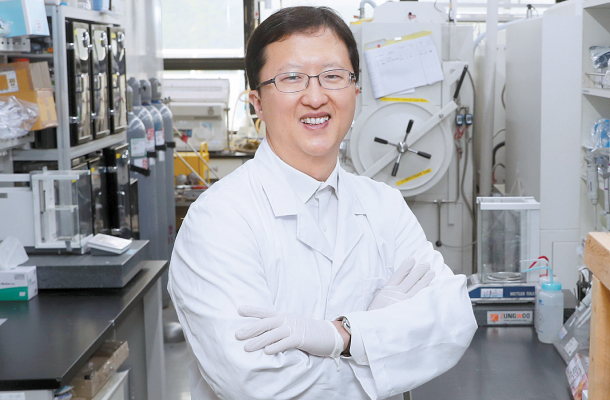 Choi Jang-Wook, a chemical engineering professor at Seoul National University, is a leader in the global battery market. His research paper on aluminum-based rechargeable batteries, co-authored by Nobel Prize winner and Northwestern University Prof. Fraser Stoddart, was published in Nature Energy and well-received around the world.

As the global electric car market grows rapidly, batteries are now often referred to as the next semiconductors.

According to a market tracker Counterpoint Research, the world electric vehicle market is expected to grow from two million units this year to 11 million by 2025.

Although the global market for electric-car lithium batteries is now dominated by Chinese manufacturers, Samsung SDI and LG Chem have joined the race.

Batteries are half the cost of electric vehicles, and aluminum is cheap and highly conductive.

Choi shaped the molecules in a triangular shape to overcome the poor durability of the material.

“The core of the electric car era comes down to batteries,” Choi said last month. “Those with new materials to make batteries more efficient and allow cars to travel further can dominate the market.”

If Choi’s research becomes commercialized, aluminum-based batteries can allow electric vehicles to travel between 600 to 800 kilometers (372 to 497 miles).

“I want to further contribute by winning core patents and learning more about the production of batteries,” Choi added.

Choi obtained his Ph.D. in chemical engineering at the California Institute of Technology after earning his bachelor’s degree in the same subject at Seoul National University. Stoddart was Choi’s academic adviser while he was in California. For his dissertation, he attached molecular machines to memory devices. Choi returned to Korea in 2010 after conducting additional research at Chicago University and Stanford University.

Having become a professor at KAIST, he worked with Stoddart to create a new battery system by innovating molecular structures.

His 2017 paper on applying a type of molecular machine to rechargeable batteries was well received in academia and published in Science Magazine.

Choi is often flooded with requests for joint research efforts. Many companies focused on the potential of rechargeable batteries, such as Samsung SDI and LG Chem, have come and asked for his help.

“I knew my adviser Stoddart was a world-class academic researcher,” Choi said. “His research on molecular machines was a big help to my research on new battery materials.” 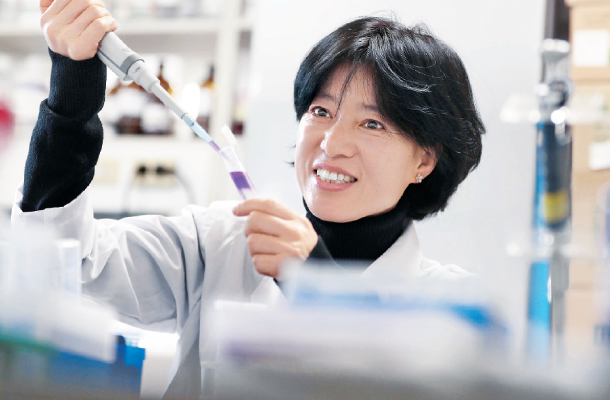 Park Eun-Jung, a professor at Kyung Hee University Graduate School of East-West Medical Science, is a prominent scientist in the field of nanotoxicology. Having published 94 papers throughout her career, she was rated as a top 1 percent researcher for three consecutive years from 2016 by Clarivate Analytics.

She won the Presidential Postdoctoral Fellowship in 2011 from the National Research Foundation (NRF) and received the Knowledge Creation Award from the Korea Institute of Science and Technology Information in 2015. She was the second female scientist and the first scientist in a temporary position to win the award.

Despite her long list of honors and extensive research work, not a single university hired Park as a tenured professor until late 2017, as she neither graduated from a “prestigious institution” nor studied abroad. Park earned her bachelor’s degree at Dongduk Women’s University.

Park was also a female scientist with a long career break. It was only when she became 40 that Park earned her Ph.D. She could not continue her studies as she became responsible for raising children and looking after her ill parents.

Yet she successfully published five Science Citation Index-level papers by the time she earned her doctorate.

Just two years ago, Park was an unpaid adjunct lecturer at a four-year college in Gyeonggi depending solely on 50 million won a year from NRF. She was merely a worker using a corner of a laboratory spending her own money to buy materials for experiments. She had been jumping from one laboratory to another until a JoongAng Ilbo article on her was published in November 2017.

After the article was published, numerous universities in Korea, including KAIST, engaged in a fierce battle to hire Park as a tenured professor. She ultimately chose Kyung Hee University as her new workplace.

Since gaining fame, Park has actively mentored women like herself who have taken a career break and suffer gender discrimination. She has shared her experiences by appearing on several television shows and held special lectures for college students and women.

Park was an ambassador for Fail Expo hosted by the Ministry of the Interior and Safety.

“I miraculously became a professor with my own lab and students while on the brink of giving up the dream from despair,” Park said.

“I wish to tell researchers who have taken a break for marriage and parenting not to give up, but at the same time, I wish society would evaluate skillful researchers beyond their background.” 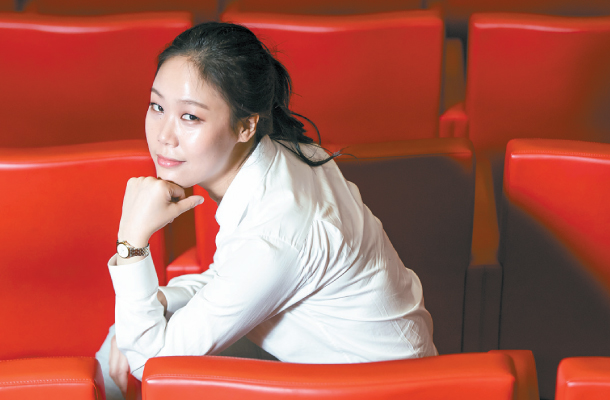 France, Switzerland, Turkey and the United States. These are some of the countries pianist Son Yeol-eum, 33, has traveled to during the last year for piano concerts. The list goes on. As an internationally celebrated pianist, such a busy itinerary does not seem surprising. But as a pianist, an artistic director of a music festival, an emcee of a classical music program for a television and a writer, even 24 hours a day seems too short for her to juggle all those roles. Son, who says she’s reducing her sleeping hours to perform all her duties, managed to make time to return to her home country from Hanover, Germany, where she resides, to receive the Yumin Award. Son is a recipient of the award in the Culture and Arts category.

“I want to dedicate this honor to my parents, who raised me not to lose creativity,” said Son, who sat down with Korea JoongAng Daily for an interview on Wednesday prior to the awards ceremony.

She understands how important it is to acquire creativity when young, so when she became artistic director of the PyeongChang Daegwallyeong Music Festival, she added various humanities programs on top of master classes for students who participate in the festival’s school program.

“I was educated in Korea when I was younger, and when I looked back and thought of what kind of classes and lessons really helped me in becoming a pianist I am now,” said Son, “I think such humanities classes were lacking a little.”

Although Son has been more of a director recently, she still is an active concert pianist.

But Son’s true value became evident after she was handed the artistic directorship of the PyeongChang Daegwallyeong Music Festival following predecessors Chung Myung-hwa and Chung Kyung-wha. Some people raised concerns, insisting that the “position is too burdensome for a 32-year-old pianist.” But after successfully leading two seasons, she’s been receiving praise for “creating new kind of classical music festival with a fresh young spirit.”

Those who recommended Son as a candidate for this year’s Yumin Awards said that she has “expanded the horizons of the country’s classical music and the arts through her abundant knowledge in humanities and her spirit of adventure.”

As an artistic director, she not only maps out the programs and invites renowned artists from around the globe, she also performs as a pianist and writes commentaries in the program books. Such efforts from Son for the past two years have allowed visitors to the festival to say they want to take home the program book and keep it on their shelves.

Son says writing is what she loves to do with her hands after playing the piano.

“Music, I believe is the most abstract concept in the field of arts. Writing is the most idealistic,” said Son. “Therefore, I think the two complement each other very well.”

Son has also been emceeing a classical music program on MBC TV since last July. And last year, she was appointed to head the jury for the preliminary round of the 62nd Ferruccio Busoni International Piano Competition. But Son explained she expends most of her energy to “more creatively plan and promote the classical music festival.”