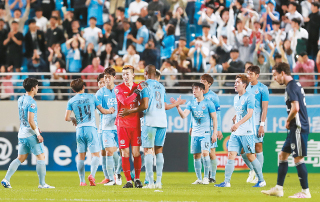 Daegu hammered Melbourne Victory 4-0 in Group F action at the Asian Football Confederation (AFC) Champions League at Forest Arena in Daegu, 300 kilometers (186 miles) southeast of Seoul. Brazilian striker Edgar converted a penalty nine minutes into the match, while Jeong Tae-wook, Kim Dae-won and Jung Seon-ho had a goal apiece in the second half, as Daegu snapped their two-game losing streak in the competition.

Daegu climbed a spot to second in Group F with nine points from three wins, two losses. Daegu only need a draw against Guangzhou Evergrande, who have seven points, in their final group match on May 22 to advance to the round of 16 for the first time.

Guangzhou lost to Sanfrecce Hiroshima 1-0 on Wednesday to fall to third place behind Daegu. Hiroshima clinched the top seed in Group F.

Daegu, competing in their first AFC Champions League, will try to join two other Korean clubs, Jeonbuk Hyundai Motors and Ulsan Hyundai FC, in the round of 16. Jeonbuk and Ulsan clinched top spots in Groups G and H, respectively, with victories on Tuesday.

The top two clubs from each of the eight groups will advance to the round of 16, which begins on June 18.

Eight minutes in against Melbourne, Kim earned the penalty for Daegu after getting tripped up by Joshua Hope in the area, and Edgar stepped up to score the ensuing penalty past Matthew Acton.

Daegu kept pressing for more, but the second goal didn’t come until the 53rd minute, when Jeong scored on his own rebound.

Kim put the match further out of reach with a thunderous strike from the right edge of the box in the 80th. Jung rounded out the scoring in the 83rd, just one minute after he came off the bench.

Kim Seung-jun opened the scoring for Gyeongnam in the 43rd minute, but Shandong erased the deficit with two unanswered goals in the second half. Hao Junmin tied the score with a 64th-minute free kick, and Maroune Fellaini scored the go-ahead goal in the 87th.

Gyeongnam remained in third place with five points, but they still have a chance to advance to the round of 16, after second-place Kashima Antlers lost to last-place Johor Darul Ta’zim 1-0 in Wednesday’s other Group E match.

Kashima stayed at seven points, only two clear of Gyeongnam with one game to play. If Gyeongnam beat Johor Darul Ta’zim and Kashima fall to Shandong in their final group matches on May 22, then it will be Shandong and Gyeongnam moving on to the knockouts.

But if Kashima prevail over Shandong or manage a draw, Gyeongnam will be eliminated regardless of their result against Johor Darul Ta’zim. A combination of a Kashima draw and a Gyeongnam victory will see the two clubs finish with eight points each. But Kashima will win the tiebreak in that case, thanks to an away-goals edge in their head-to-head meetings.