Tottenham Hotspur’s had very little chance of advancing to the UEFA Champions League final, but they still managed to pull it off in dramatic style on Wednesday. 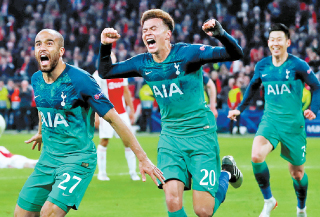 Players celebrate after Lucas Moura, left, scores against Ajax during the Champions League semifinals at Johan Cruyff Arena in Amsterdam on Wednesday. [REUTERS/YONHAP]

Their advancement also means that Tottenham Hotspur’s Son Heung-min will become the second Korean footballer to play in a final of the UEFA Champions League next month as his team pulled off an astonishing overnight comeback victory.

The two teams tied at 3-3 on aggregate, but Spurs outnumbered the Dutch club on away goals. Spurs will face Liverpool in the Champions League final to be held on June 2 in Madrid.

“It was a crazy game,” Son, who played scoreless full-time in the semis, said in a post-match interview. “I think it’s the best memory for me, and history for myself and also for my country and also for Tottenham.”

Given his contributions to the team’s quest in the tournament, Son is unlikely to miss the finals against Liverpool, the first all-England showdown in 11 years. He scored three goals in the quarters against Manchester City and one in the round of 16 match against Borussia Dortmund.

If so, he will be the second Korean football player to appear in the final of the competition following Manchester United legend Park Ji-sung.

Park, who played with Manchester United from 2005 through 2012, played in the 2008-09 UEFA Champions League final against Barcelona. He was also in the starting lineup for the 2010-11 season’s final match against the same Spanish team. Park’s team finished runners-up in both finals.

If Spurs win, Son will be the first Korean footballer to lift the European Cup.