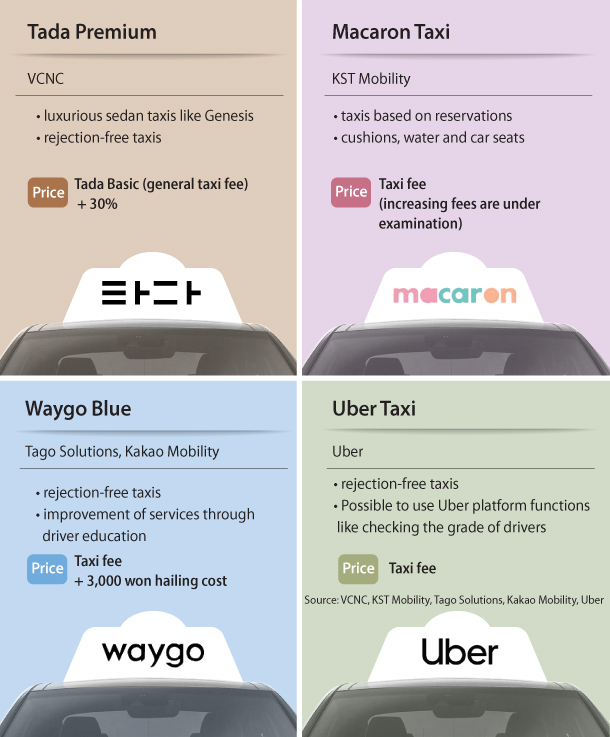 Companies with mobility technologies are releasing taxi-hailing services that may be better than existing services.

Customers who had no choice in the past and had to take a designated vehicle can now choose from a variety of cars, including a Genesis or a Mercedes-Benz.

VCNC, a subsidiary of car-sharing company Socar, announced on Wednesday that it will start a pre-test of TADA Premium starting May 13.

The TADA Premium fee is lower than that of existing high-end taxi services, such as Kakao Black or Uber Black, which charge fees more than 50 percent higher than ordinary taxis.

Yet, it could take several days for the service to be offered as the company still needs to negotiate with the Seoul Metropolitan Government.

While it is possible for the drivers who have worked for high-end taxi services, like Kakao Black, to switch to TADA Premium, taxi drivers who have driven midsized or deluxe taxis still need to get the approval of the Seoul city government in order to drive TADA Premium.

Also, a controversy developed after it was reported that the Seoul government was demanding that taxi drivers for VCNC put up 10 million won ($8,480) per vehicle as a security deposit in exchange for a premium-service license approval.

At the end of March, Kakao Mobility and Tago Solutions also joined the trend by launching Waygo Blue, a rejection-free taxi-hailing service. Although there are complaints that the hailing fee is too expensive, at 3,000 won, the service has been accepted in the market since there is a growing demand for the service during commuting hours.

About 80 percent of normal taxis at any moment are empty. For Waygo Blue, that number is 50 percent.

“We’re in a situation where supply is having trouble meeting the rising demand,” said the vice president of Tago Solutions.

Macaron Taxi by KST Mobility - which started a test service April 17 in the districts of Gangnam, Seocho and Songpa in southern Seoul - offers its services to only those making reservations. Although it currently operates only 20 taxis, it is known to provide high-quality services without additional cost.

Macaron Taxi drivers receive service education for a week after joining the company. Inside the taxi, cushions, as well as a fresh bottle of water and fine dust masks, are offered. If requested, car seats are installed.

JoongAng Ilbo used the service three times from April 17 to May 6, and found the internal condition of the car was far better than general taxis at the same price.

The main problem was that the taxi arrived 10 minutes later than the reserved time. Also, the car seat was installed improperly.

“We are planning to increase the number of cars to 30 by the end of May,” said an official from KST Mobility. “We are continuously improving the service as well.”

Uber showcased Uber Taxi in Korea on April 2 and is gradually gaining recognition.