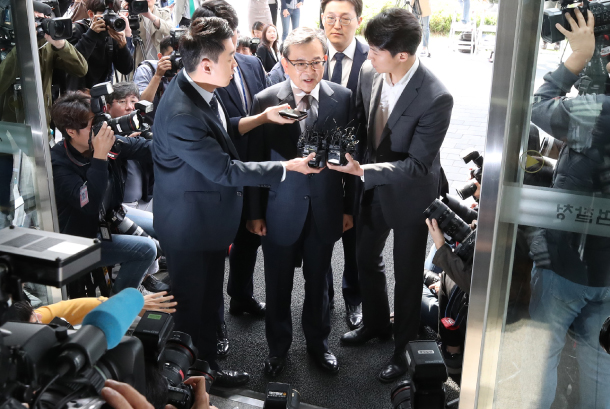 Former Vice Justice Minister Kim Hak-eui appeared at the Seoul Eastern District Prosecutors’ Office on Thursday to answer questions about allegations he received bribes and committed sex-related crimes during wild parties thrown by a local contractor from 2007 to 2012.

It was the first time since 2013 that Kim was summoned by prosecutors in the case.

Kim served as the No. 2 official in the Justice Ministry for just six days in March 2013 during the Park Geun-hye administration before he resigned over a sex-parties-for-favors scandal. Prosecutors who investigated him and the contractor, Yun Jung-cheon, at the time decided not to charge them with any crime, citing a lack of evidence.

The case was reopened recently.

Kim told reporters before entering the Seoul Eastern District Prosecutors’ Office on Thursday that he would faithfully answer prosecutors’ questions but didn’t respond to inquiries asking about bribery and sex allegations. Prosecutors believe Yun hired women to have sex with high-profile figures, including Kim, to gain business favors. A woman came forward recently to claim she was raped and videotaped by Kim and Yun.

Yun was summoned for questioning six times this year, during which he adamantly denied arranging prostitutes for Kim. Yun did admit giving Kim valuable gifts, including a painting. But prosecutors said the statute of limitations for those minor bribery has expired.

Authorities are now trying to find larger bribes, for which the statute of limitations has yet to expire. If it turns out Yun gave Kim gifts worth 100 million won ($84,650) or more, Kim could be charged with violating the Act on the Aggravated Punishment, Etc. of Special Crimes, which has a statute of limitations of 15 years.

While recently questioning acquaintances of Yun, prosecutors received testimony from a man who said Kim’s wife contacted him in early 2013, around the time police first opened a probe into the scandal. Kim’s wife was said to have offered him a bag full of cash, asking him not to testify to authorities. The unidentified source said he refused to take the cash. Prosecutors said they were planning to ask Kim why he tried to silence his acquaintances, an allegation Kim’s lawyer denied. Based on Thursday’s questioning, prosecutors will decide whether to ask a local court to issue a pretrial detention warrant for the former justice deputy.