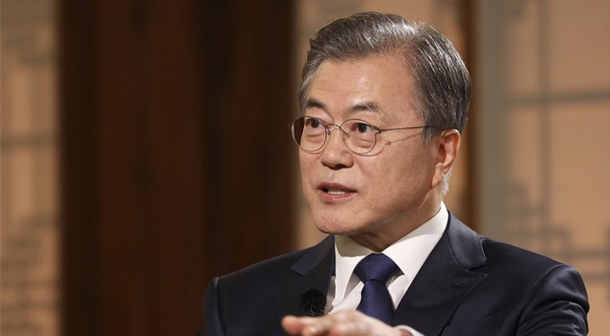 In a special interview with public broadcaster KBS, Moon said South Korea and the United States together concluded that the North had fired two “short-range missiles” Thursday afternoon based on their flight distances. The launches took place hours before Moon was interviewed live on the state-run broadcaster to mark the end of his first two years in office.

The launches Thursday followed the North’s firing of a volley of short projectiles on Saturday. While Seoul tried to avoid using the term “missiles” to describe them, the Pentagon said the North last weekend fired “rockets and missiles.”

He tried to downplay that possibility.

“The resolutions target the North’s mid and long-range ballistic missiles,” Moon said. “The North’s firing of short-range missiles has never been a problem.”

He also said the United States assessed that Saturday’s launches were also not in violation of UN resolutions.

Moon said he did not see the launch Thursday of short-range missiles as a violation of a recent inter-Korean agreement.
“The two Koreas agreed that they would not use armed forces against each other,” Moon said. “We also agreed that exercises would take place in areas certain distances away from the demilitarized zone. And the latest launch was made from a location outside the [prohibited] zones.

“And yet, I want to warn the North that if these actions are repeated, they can make dialogue and negotiations difficult,” Moon said.

He also admitted that Seoul failed to predict Thursday’s launch. “And I cannot say if this will be the last,” he said.

Moon analyzed that the Kim Jong-un regime was expressing to the South and the United States its displeasure over the breakdown of the North-U.S. summit in Hanoi with military provocations.

“No matter what the North’s intention was, it must accurately discuss its dissatisfaction in dialogue,” Moon said. “I want to tell the North once again that repeating actions that throw cold water on dialogue and negotiations is never desirable.”

He said the fundamental resolution to the crisis is resuming talks between Pyongyang and Washington as soon as possible. “And Seoul is putting various efforts into facilitate the talks,” he said.

During the interview, Moon made clear that the latest provocations did not affect the administration’s plan to offer food aid to the North. He said the South has stockpiles of rice, and that it is inhumane to ignore the food crisis in the North. He also said food assistance may be used as a means to create a breakthrough in the stalled dialogue, and U.S. President Donald Trump has expressed his full support.

Moon said Seoul needs to use inter-Korean cooperation funds to send the assistance, which requires the National Assembly’s approval. He asked the leaders of the ruling and opposition parties to meet with him to discuss the issue, despite a current standstill at the legislature.

During the interview, Moon also described some of his private conversations with Kim during their summit at the Panmunjom in April last year. He said Kim spoke candidly to him that the North had no reason to hold onto its nuclear programs if the regime’s security was guaranteed.

Moon also discussed the deteriorating relations between Korea and Japan. He said historical issues have been an obstacle for advancing bilateral relations, but the South Korean government is not to blame.

“Japanese political leaders keep using them for domestic politics, and the history issue has hindered future-oriented relations,” Moon said. “The two countries need to put their wisdom together.”

Moon said he will visit Japan in June to attend a Group of 20 Summit, and “it will be good if I can have a summit with Japanese Prime Minister [Shinzo] Abe” on the sidelines of the international meeting.