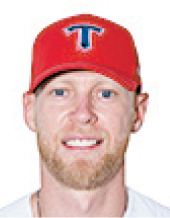 Hazelbaker hasn’t exactly been playing in Gwangju for long. Upon completion of the 2018 season, the Tigers parted ways with Roger Bernadina, replacing him with Hazelbaker on a one-year contract at $700,000.

Despite the high expectations, Hazelbaker had a disappointing start in his debut season in the KBO. In 11 games he had a .146 batting average with five RBIs and two home runs.

Tucker was drafted by the Houston Astros in the seventh round of the 2012 Major League Baseball draft, but it wasn’t until 2015 that he made his big league debut for the Astros.