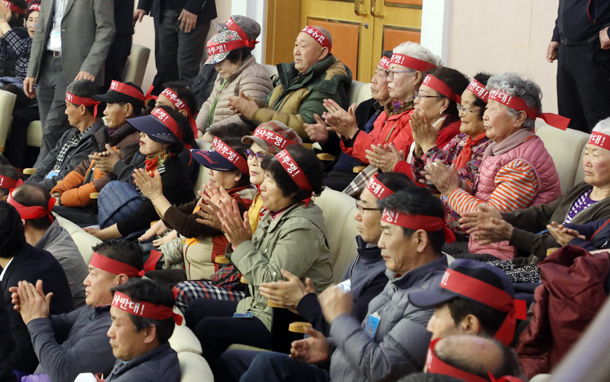 Villagers from the area near the Pyeongchon Industrial Complex in Daejeon applaud on March 22 after a local assemblyman protested Daejeon city’s plan to attract the construction of a liquefied natural gas power plant to the complex, citing concerns of air pollution. [NEWS1]

KIM BANG-HYUN
The author is the Daejeon bureau chief of the JoongAng Ilbo.

For last year’s summer vacation, President Moon Jae-in visited the recreational forest in Mount Jangtae, Daejeon. It is considered a resort destination in one of the metropolitan cities in Korea. Thanks to Moon’s trip, the number of visitors to the forest increased by more than 40 percent from August to December compared to the same period the previous year. Locals say that the area has become a tourist destination thanks to the president. But lately, the sentiment in the area has been stirred. A liquefied natural gas (LNG) power plant construction is planned in Pyeongchon Industrial Complex, about 500 meters (1,640 feet) from the forest. The city of Daejeon signed an investment memorandum of understanding with Korea Western Power to build a 100-megawatt LNG power plant. The power plant is expected to become a catalyst for leases in the industrial complex.

The residents of the farming village on the outskirts of the city claimed that it would be a disaster because of the possible fine dust emissions. Experts estimate that the power plant could emit fine dust equivalent to one million cars. As the news spread, outsiders who visited the village stopped coming. There is a rumor that a powerful politician was involved in attracting the construction of the power plant to the industrial complex.

The LNG plant is closely related to the government’s nuclear phase-out policy. Because electricity cannot be stably supplied with solar energy and other renewable sources, LNG power facilities have been increasing as a supplement for coal power. There are movements to oppose LNG power plants in Eumseong County, North Chungcheong, and Tongyeong, South Gyeongsang. The government may not have been involved in regional LNG power plant projects, but it seems certain that the government’s nuclear phase-out policy partially triggered the discord. There is a report that Germany, which Korea took as a role model, admitted that its nuclear phase-out was a failure.

But the government doesn’t seem to have any intention of changing its policy. The government plans to increase the share of renewable energy to 30 to 35 percent by 2040. You can avoid disaster only when you consider the possibility of error. People’s concerns are deepening as they watch the government’s rigid mindset.