Missiles were likely a North version of Russia’s Iskander

Missiles were likely a North version of Russia’s Iskander 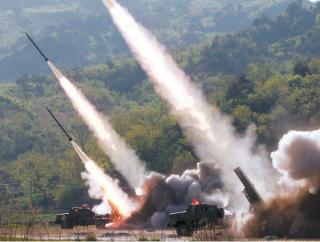 Short-range missiles are launched by North Korea on Thursday. [YONHAP]

The short-range missiles that North Korea fired this week are believed to be a version of Russia’s Iskander ballistic missile, and their flight across the territory appears to show the reliability of the weapon, experts said Friday.

On Thursday, North Korea fired two short-range missiles eastward from its northwestern region of Kusong, according to Seoul’s Joint Chiefs of Staff (JCS). After flying 420 kilometers (260 miles) and 270 kilometers, respectively, all the way across the North Korean territory, they splashed into the East Sea, the JCS added.

While the military did not disclose the exact type of the missiles, photographs released by the North’s Korean Central News Agency about its “strike drill of various long-range strike means” revealed projectiles that bear outward similarities to the ground-to-ground short-range ballistic missiles known as Russia’s Iskander.

They also look identical to what the South Korean military dubbed as “a new type of tactical guided weapons” Pyongyang launched last Saturday, along with a barrage of projectiles featuring 240-milimeter (9.4-inch) and 300-milimeter multilauncher rocket systems.

Launched from the North’s east coast city of Wonsan, one of the “tactical guided weapons” flew about 240 kilometers. Pyongyang first showed off its version of Iskander during a military parade in February last year, and had not test-fired before.

“Given, in particular, that the altitude of what North Korea fired on Saturday and yesterday all reached around 50 kilometers, they seem to be the same type of Iskander ballistic missiles,” said Shin Jong-woo, a senior analyst at the Korea Defense Security Forum in Seoul.

Some suspect that the projectiles fired Thursday could be Scud-type missiles or medium-range Nodong missiles, but others pointed out scud-type or Nodong missiles should reach a peak elevation of 80 kilometers in order to cover a ground distance of 280 kilometers.

“After carrying out an initial test last week on the east coast, the North appears to have taken the weapons to its western region for a next-phase test, which is a typical way of developing its missiles,” Shin added.

If history serves as any guide, North Korea usually conducts a test-firing of missiles on its east coast areas, before launching them eastwards from western regions to fly them across its territory into the East Sea in order to check their stability and operational capabilities, he noted.

Russia’s Iskander has a range of about 280 kilometers when carrying a warhead weighing around 450 kilograms, and flies on a flattened trajectory not exceeding an altitude of around 50 kilometers.

The Iskander has several versions, and detailed specifications of Pyongyang’s Iskander were not known. But the solid-fuel missiles can fly as far as 500 kilometers, putting the entire Korean Peninsula within their range.

Due to its relatively low-peak altitude, the Iskander could neutralize the advanced U.S. antimissile defense system (Thaad), and it is nearly impossible to prevent their launches due to their mobility, according to experts.

Last Saturday, the projectile was fired from an eight-wheeled transporter erector launcher (TEL). But the launcher employed in Thursday’s firing took the shape of an advanced armored vehicle.

“Iskander is also known to be capable of altering its flight path over its entire trajectory, making it very effective tactical means for the military,” said Chang Young-keun, a missile expert at Korea Aerospace University.

The South Korean military did say Pyongyang was believed to have fired short-range missiles on Thursday, but stopped short of labeling them “ballistic.” Describing the projectiles launched last week, it has repeatedly said it could not determine if they are missiles, sparking opposition allegations that the government is reluctant to acknowledge it over concerns that it could negatively affect the negotiating process with Pyongyang.