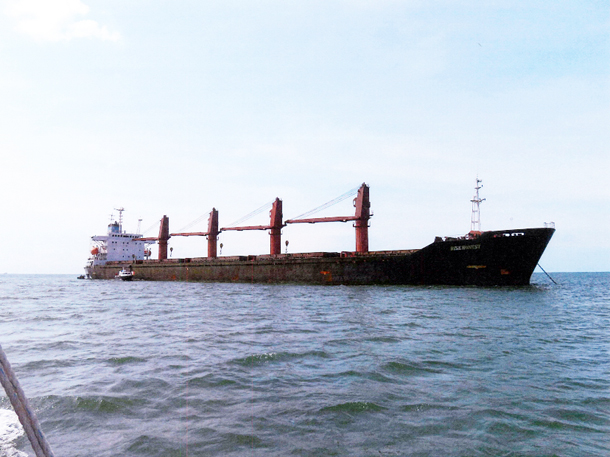 The United States has for the first time seized a North Korean vessel suspected of transferring coal and machinery in violation of sanctions on the regime, the U.S. Justice Department announced Thursday.

The 17,061-ton Wise Honest, one of the North’s largest bulk carriers, was intercepted by foreign maritime authorities in April last year after being loaded with coal in Nampo, North Korea, the department said. The ship is currently in U.S. possession.

“Today’s civil action is the first-ever seizure of a North Korean cargo vessel for violating international sanctions,” said U.S. Attorney Geoffrey S. Berman of the Southern District of New York. “We are willing and able to deploy the full array of law enforcement tools to detect, deter and prosecute North Korea’s deceptive attempts to evade sanctions.”

Berman said the North was found to be concealing the origin of the Wise Honest to export tons of high-grade coal to foreign buyers and import heavy machinery to the North.

The communist regime is under multiple U.S. and United Nations Security Council sanctions for its nuclear and ballistic missile programs, including a ban on exports of coal.

The announcement came hours after North Korea fired short-range missiles into the East Sea in apparent protest of stalled denuclearization negotiations with the United States.

The launch followed the firing of multiple short-range projectiles into the same waters on Saturday.

According to documents filed Thursday with the federal court in Manhattan, the Wise Honest was used by a shipping affiliate of Songi Trading, which was sanctioned by the United States in June 2017 for its involvement in North Korea’s coal trade. The U.S. Treasury Department determined at the time that the company was a subsidiary of North Korea’s military forces, the Korean People’s Army.

The documents also showed that one of the shipping firm’s representatives, Kwon Chol-nam, paid in dollars for various improvements, equipment purchases and services expenditures related to the Wise Honest.

Those payments were made through unwitting U.S. financial institutions, which are banned by U.S. law from conducting transactions with North Korean entities.

More than $750,000 was transmitted in connection with the March 2018 shipment of coal prior to the vessel’s detention.

“This sanctions-busting ship is now out of service,” Assistant Attorney General for National Security John C. Demers said. “North Korea, and the companies that help it evade U.S. and UN sanctions, should know that we will use all tools at our disposal - including a civil forfeiture action such as this one, or criminal charges - to enforce the sanctions enacted by the U.S. and the global community.”