In an anxious age, what do we worry about most?

In an anxious age, what do we worry about most? 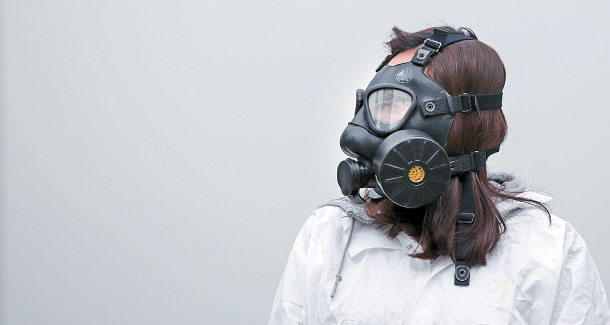 A member of an environmental organization wears a gas mask to demand measures to combat fine dust. According to research using big data analysis, Koreans are worrying about fine dust, sexual assault and are generally concerned about their safety. [YONHAP]

A 25-year-old graduate of Sookmyung Women’s University fears public restrooms. She remembers an incident at her university in which a man in his 50s forced himself into a women’s toilet.

“Whenever I go into a restroom, I check to see if there are hidden cameras,” she said. “Between friends, we wonder whether we’ve already had our pictures taken.”

Headlines about hidden cameras and men forcing themselves on women make her afraid of everything outside her home.

A 38-year-old housewife from Goyang, Gyeonggi, squabbles with her daughter whenever she wants to go outside to play. Stay indoors, she commands her. The air is too dusty outside. At the beginning of the school term, when the fine dust was especially bad, the mother drove her daughter to school every day, even though it’s only a 15-minute walk.

“I pity children who are trapped inside their homes and adults who can’t open their windows in their own apartments as they please,” said the housewife. “I am worried that the fine dust accumulated in our bodies might lead to serious diseases.”

Korea is living through an age of anxiety. From fine dust to sex crimes, people worry that their right to safety is being steadily eroded.

The Institute for the Future of State hired Tapacross, a professional research company, to analyze big data consisting of 120 million references on online platforms for 18 months from July 2017 to December 2018, after President Moon Jae-in entered office.

Social network platforms, blogs and online communities were selected and analyzed. Through this data, Tapacross identified changes in people’s interests during the period.

Within the research period, the most referenced issue was the 2018 PyeongChang Winter Olympics at 3.4 million references, the Me Too movement at 2.9 million references, the summit between the two Koreas at 2.3 million, fine dust at 2.2 million and the online politicking of Gyeonggi Gov. Lee Jae-myung’s wife Kim Hye-kyung with 2.1 billion. Tapacross excluded nationwide events such as summits in its analysis and concentrated on issues that created conflict and confusion.

In addition, issues related to safety were prominent, such as the launching of a North Korean intercontinental ballistic missile (840,000 references), the Isu Station assault (640,000), misbehavior by the family controlling Hanjin Group (510,000) and an incident at Hanssem, Korea’s largest furniture company, in which a new recruit claimed she was coerced into having sexual intercourse with a senior colleague (460,000). Of the issues, 70.4 percent were related to safety.

“Violence and fine dust have become a part of our everyday lives,” said Kim Kwang-doo, chairman of the Institute for the Future of State. “They are making people anxious.”

In the realm of politics, the issue of fairness was mentioned most frequently, 32.1 percent of the time, followed by safety at 29.9 percent and justice at 17.3 percent.

“People were angry because they thought there were many cases of unfairness during [President Park Geun-hye’s term],” said Kim Hyung-jun, a professor of politics at Myongji University. “The current government said it was a champion of fairness when it came into office, but failed to reach its goal.”

In economics, stability was prominent at 47.5 percent and trust less so at 22.6 percent.

“Koreans are distrustful of the government’s real estate and income-led growth economic policies,” added Kim. “Their doubt in the government grew, especially after the sudden hikes in the minimum wage produced the opposite result than what was expected.”

Experts in the field saw in the analysis that there was anxiety at the base of Koreans’ pursuit of safety, fairness and stability.

“The distrust and resignation that comes from thinking that society cannot protect its individuals appears as a desire for safety and fairness,” said Kim Jung-baek, a professor of sociology at Kyung Hee University. “This means that Koreans are thinking that their country is unable to provide one of its main roles of protecting citizens’ security.”

To explain the cause of this anxiety, Kim compared Korea to a teenager. “Korea is like an adolescent that has a big body, but is intellectually not yet an adult,” Kim said. For the first time last year, Korea reached a gross national per capita income of over $30,000. However, among the 34 countries in the Organization for Economic Cooperation and Development (OECD), Korea is last in the happiness index for young people, and its suicide rate is twice the average for OECD countries.

“Korea has achieved industrialization in half a century, whereas Britain took 200 years and the United States took 150 years,” said Kwak Geum-ju, a professor of psychology at Seoul National University. “It has become a wealthy country, but everyone in it is anxious and cannot control their anger.

“This is because the whole country was fixated on results and closed their eyes to corruption,” she added.

“Leaders in society, who should set an example for others, only want to enjoy their power without taking responsibility, which is what is making society impoverished,” said Kwak.