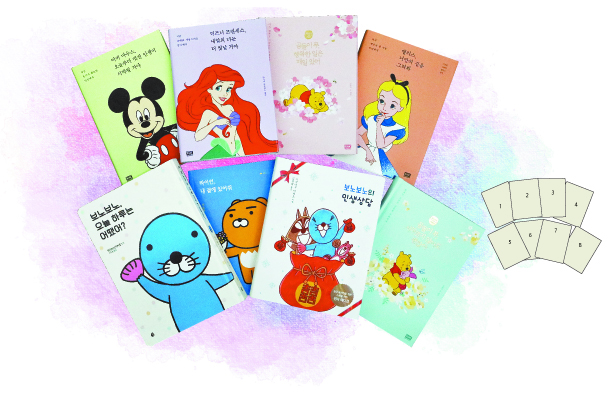 “Even if you made a mistake, don’t blame yourself.”

“Hold on to good memories and let go of the bad ones.”

“The pain you are suffering now might be a trivial one.”

“A person with a warm heart doesn’t make others feel humiliated.”

“If you let go of prejudice, you can see so much more.”

These are some of the comforting words 34-year-old Seo Ja-kyung turns to whenever she feels down and lost. She’s a believer of Buddhism and majored in philosophy in college, but ironically, the book she finds comfort in these days is not the Buddhist scriptures or “The Analects of Confucius.” It’s a book that is teeming with Winnie the Pooh’s wise words and useful advise.

The book, titled “Pooh Bear, Happy Things are Always Here,” first hit the bookstores early last year and soon dominated the top of the best-seller list at Korea’s major offline and online bookstores such as Kyobo and Interpark. The book instantly took off, leading to the creation of a new “healing” section in bookstores that sells essay books, poems and illustrated analects that can bring comfort to readers seeking a break from reality.

Seo says she never expected to be consoled by Pooh Bear. 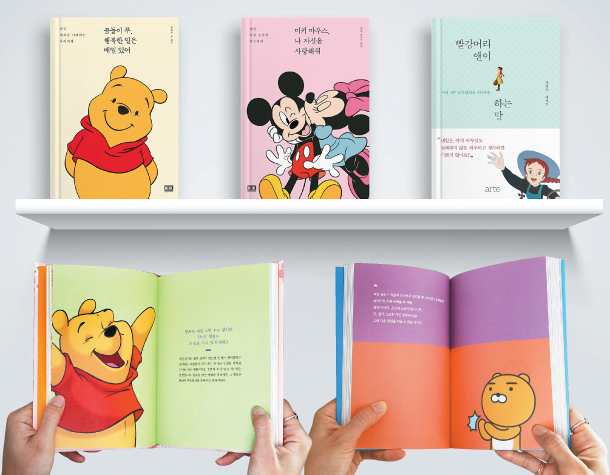 “I got the book as a gift early this year, and at first, I just began reading it because I liked the illustrations,” she said.

“But now, I keep it in the drawer of my bedside table and read it often when I just need words of positivity.”

She says the bear’s unique take on life even provides her with life lessons.

For instance, Seo said she recently got quite depressed because her best friend seemed upset with what Seo had said about her new hairdo.

“Her text messages after that incident were so cold and it really bothered me,” she said. “So that night, I got the Pooh Bear book out again and flipped through and found this page where it said, ‘Don’t be too bothered by other people’s emotions.’”

In the book, after each quote, there’s a paragraph supporting Winnie the Pooh’s wise words, helping readers to really empathize and stay positive, explained the book’s publisher RHK Company.

The book is based on the “Winnie the Pooh” stories by A. A. Milne and E. H. Shepard, which Disney Enterprises has the rights to. RHK signed an exclusive contract with Disney to publish the book.

“I picked it out from the bookstore. At first, I think I was attracted to the Pooh Bear [book because] I’m familiar with [the character],” said Hyelim. “Then as I read page after page, [I realized] it was such an easy read, and yet it touched my heart and really encouraged me, not too heavy but not too light, like a friend’s advice. After finishing the book, I sometimes randomly open a page to read it and it just gives me something positive to think about [for] that day.”

Choi Kyung-min, a senior associate in RHK’s planning and publishing team, explained to Ewha Voice that the company decided to publish the book after “noticing that the trend among Korean readers is changing from seeking self-improvement books that provide know-how on achieving success to books that provide positive words and encouragement.”

That is why the publishing company decided to use “everyone’s favorite character Winnie the Pooh and his famous quotes” and publish a character illustration book. Visual elements of the books, such as colorful covers topped with adorable illustrations, also helped sales.

The book is so adorable that Seo’s four-year-old daughter often mistakes it for hers.

“I tell her this is mommy’s book and take it away just in case she destroys it by accident,” she said. “I would be devastated to see that.”

Choi says his team of designers and marketers discussed what would be the ideal format to attract readers from the beginning of the publication process.

“That is how we came up with making the book conveniently small in size and putting a large image of Winnie the Pooh on the cover so that it makes consumers want to keep them or purchase them as a gift,” he said.

The book got so popular that it became last year’s No. 1 best seller at Kyobo Bookstore. In fact, it is still on the top 10 list today. As of April 25, the book is on its 21st edition and has even changed its cover and released a limited spring season edition.

Witnessing the popularity of the Pooh Bear book, RHK went on to publish other Disney character illustration books for adults including “Alice in Wonderland, Paint Your Own Path” last July, followed by “Mickey Mouse, Wonderful Life Will Begin Today” last September and “Disney Princesses, Your Tomorrow Will Shine Even More” in January. The company published a second Pooh Bear book, “Pooh Bear, It’s Okay Not to Rush” last May.

Other publishers also began to publish similar books using popular characters that can cheer up adults with some words of positivity. Arte Publishing Company, for example, published “Ryan, Stay By My Side” on Feb. 28, using Kakao Friends.

Since Kakao Friends do not have famous quotes like Winnie the Pooh or Disney Princesses, the publishing company worked with essay writer Jeon Seung-hwan to write the content. Although Arte’s Kakao Friends’ book did not fare as well as Winnie the Pooh, a similar book the company published in 2016 using quotes from “Anne of Green Gables” with additional commentary from writer Baek Young-ok is now back on shelves.

“I didn’t know that Arte’s ‘Words from Anne of Green Gables’ was published before all those Disney series,” said Min Kyung-sook, 29, who recently visited the Kyobo Bookstore in Gwanghwamun, central Seoul, to purchase the book. “I read both Winnie the Pooh books and fell in love with these healing books.” Min purchased two “Words from Anne of Green Gables,” one for herself and one as a gift.

“When Korea was going through rapid development, it was not so difficult to land a job or achieve what people call success with some effort,” said Kwak Keum-joo, a professor of psychology at Seoul National University. “But today, the reality is that no matter how hard you try, people think it is impossible to achieve that level of success. That is why people turn to healing books with cute characters as they provide small doses of positivity.”

It is true that so-called healing books containing quotes from famous monks or philosophers have seen an increase in sales in recent years, but their popularity is nowhere near on the same scale as Winnie the Pooh.

“That’s because I believe Pooh Bear is a friendly character that many people are familiar with and fond of,” said Kwak. “He is already known for his unconditional positivity and he’s been appearing as a comforting friend to readers and viewers across the globe through books and films for generations. That really helped the book’s success compared to other characters.”