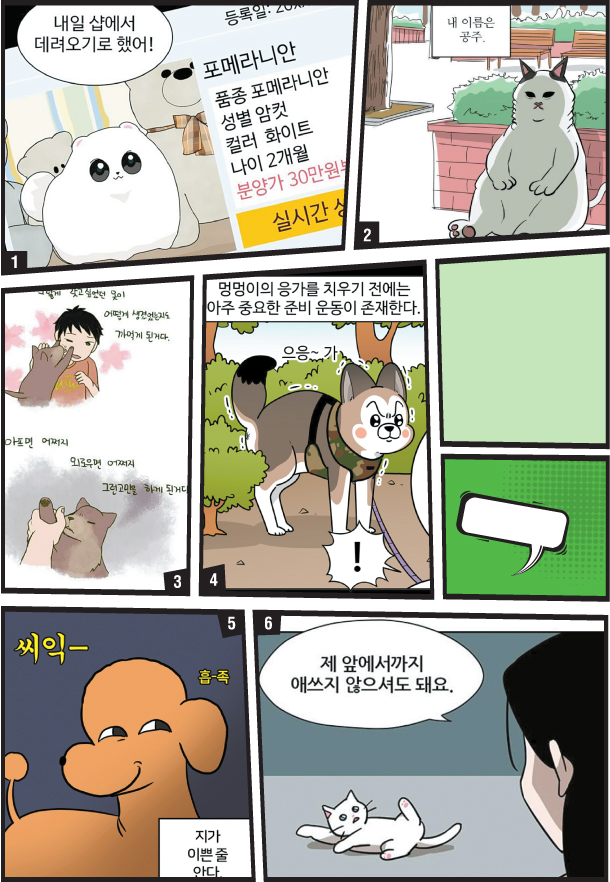 Web comics are referred to as webtoons in Korea, a portmanteau of web and cartoons. Major portal sites such as Naver, Daum Kakao and Nate have their own webtoon sections, while comic-only services such as Lezhin and Mr.Blue provide hundreds of varieties suited to different tastes. In recent years, webtoons have become so popular that some have inspired TV dramas and movies, and cartoonists themselves have become big-name celebrities.

From cats and dogs to more unusual companions, pet ownership is a growing part of life for Koreans.

The government estimates that some 10 million households own pets, and pet-related businesses are springing up across diverse fields, ranging from hotels and schools to specialized pet foods and fashion. Webtoons are no exception. While some webtoons are aimed at giving real-life tips on how to raise pets right, some are there to give viewers the chance to imagine both the ups and downs of adopting a new friend into their lives.

Among major webtoon platforms, Naver has the largest assortment of animal-related content, and each has a different vibe. While most of the time pets are depicted in the cutest way possible, the highly realistic nature of some webtoons may discourage readers from adopting a pet of their own - perhaps intentionally.

The hottest pet webtoon on Naver right now is “Nogonhagae,” or “Lazy Dogs and Cats,” by cartoonist Hongkki. She is an artist who shares episodes of her life in Seoul with her husband, and their two large dogs and two cats.

The webtoon started on Dec. 4, 2017, and it is now up to its 141st episode. The illustration of the characters is round and cute, with just enough exaggeration to let readers know what it’s really like to raise four animals in the big city.

Overall, the plot of “Nogonhagae” is well-balanced. While the author takes the time to describe the happiness she derives from living with her furry family members, she takes just as much effort to let readers know what it feels like to walk them twice a day regardless of the weather, having to clean up what their dogs leave on the streets or having to look for someone to look after their pets whenever they leave the house.

Although the work has an ample dose of cuteness, there’s still an overall message that Hongkki tries to give: Don’t raise an animal if you can’t deal with all the responsibilities, but if you are going to, then adopt from a shelter or someone you know - don’t buy a pet.

The episodes in which Hongkki first meets her two dogs at a shelter or how she looks after abandoned dogs and cats are all meant to let readers know that raising pets isn’t just for fun - it’s a heavy burden. In the 68th episode in the second season, for instance, the main character wishes that there were a system in which people could be properly educated on what it’s really like to have a pet so that they might not just abandon their animals for minor reasons, like the fact that dogs shed fur or bark.

“If people were educated properly, then so many dogs won’t be abandoned like this,” she says to herself.

According to the Ministry of Agriculture, Food and Rural Affairs, around 100,000 animals are abandoned in Korea each year, approximately 280 every day. Less than half of that daily number - or 120 - gets readopted by new owners or find their original owner, while the rest are kept at shelters and mostly euthanized.

Yet there are no real barriers to stop people from buying and selling animals like any other merchandise. It is up to the individuals, like the cartoonists, to pass on the message that these abandoned pets should be adopted.

Other pet-related webtoons on Naver also take on a similar tone: mostly cute and light-hearted, but not afraid to shed light on darker realities when needed. “I Gave Birth to a Dog” by Leesun revolves around a 26-year-old freelance illustrator who adopts a young Pomeranian in Seoul.

Contrary to the simple and flat illustration, the story delves into sensitive topics like the cost of vaccination, how pet shops trick the buyers with manipulated photos, animal abuse at dog farms and what happens to a dog when the owner is negligent. The human-like depiction of the animals’ appearance may take some people aback at first, but it’s worth a read once you get used to it.

A little less realistic but emotional and tear-jerking is “My Kitty and Old Dog” by Cho, a webtoon that actually finished all of its 215 episodes in 2011. It is the only one available in English among the webtoons mentioned here, and probably the most likeable.

The least serious of pet-centered cartoons is “Living with a Poodle,” which is centered around a humorous and comical depiction of a brown poodle and its owner.

There are, of course, webtoons that use the idea of animals just because they are cute. For instance, “Nyahan Namja,” or “The Cat Prince,” has nothing to do with raising cats. It’s actually a fantasy romantic comedy between a female college student and a cat prince who has been kicked out of his kingdom.

He can take on three forms: a human, a human-sized cat and a cute small cat. The small cat character is so popular that readers have asked the author for mobile emoticons to use on their chat apps, although this hasn’t happened yet. The story mostly takes place on a university campus, touching on some social issues, such as discrimination and sexism - but only ever so lightly.

“Nyanghamuin,” which translates to “A Ruthless Cat,” uses the idea of a stray cat as the main character to lead a comic cartoon, rather than talk about the life of a real stray cat - but it’s still fun. Fat stray cat Gongju decides to “adopt herself” and find humans to look after her, and runs into odd humans in the process.