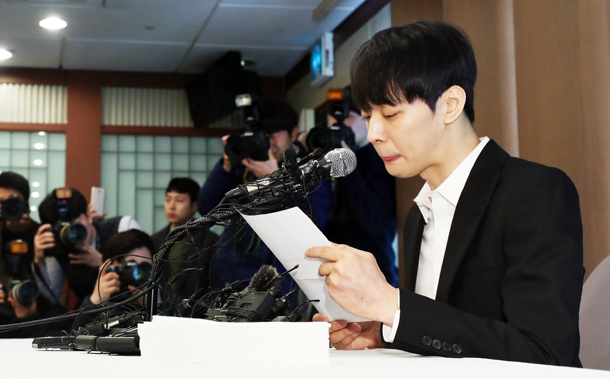 What I found shocking about actor-singer Park Yu-cheon was that he lied at a press conference. A press conference is an event that is based on the premise that one is speaking officially and truthfully in front of the public. As he planned a fake press conference to tell his lies, I thought the system I had believed in as a reporter was fundamentally broken.

Experts say that fandom is one of the causes for the incident. While fandom is similar to passionate fans, it is much stronger as it comes with formidable power of celebrity and financial gains in the digital era. Billions of people around the world have spread persons or products on YouTube or social media to create a boom, which brings secondary and tertiary profits through sales and advertisements. For celebrities like Park, maintaining their fandom a little longer is very important, so he did not hesitate to have a fake press conference.

The same can be applied to the Imvely online shopping mall. Imvely became hugely successful thanks to her fandom, but was cornered after the pumpkin juice she sold was found to be moldy and there were allegations of design infringement. The real blow was how she responded to the problems. Her company, which grew based on communicating with her fandom, blocked the social media comment sections. Im Ji-hyun, who runs the company, said in her apology that she was arrogant to think people would understand because they liked her. She confessed that she thought little of quality control, customer service and management ethics as she was enraptured by the strong support from her fandom.

The ending of the story is simple. The fandom turns into anti-fans. Fandoms were not created for no reason. There are clear and rational reasons, such as celebration of achievements, respect, trust, brand value and support. Honesty and morals are the basis. When these reasons disappear, fandoms will leave without hesitation.

AmorePacific Group chairman Suh Kyung-bak repeatedly emphasized the importance of fandom in a regular meeting in May. He did not forget to mention, “The substances loved by the people is the same; outstanding products and innovative products made better than others.”

Fandoms are weapons of success, but celebrities, businesses and politicians are wrong to think that fandoms offer an unconditional defense even when the basics and morality fall.