Live baseball from a virtual sofa

Live baseball from a virtual sofa 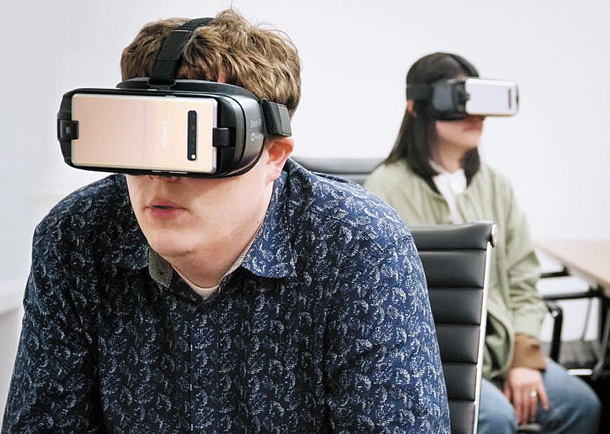 The Korea JoongAng Daily’s Jim Bulley and Kim Jee-hee watch baseball in virtual reality in the JoongAng Ilbo building in central Seoul on May 9. [JEON TAE-GYU]

Virtual reality (VR) has the potential to revolutionize the way that we are entertained, and the world of sports is no exception.

Though VR isn’t new, mobile carriers say 5G will dramatically improve the quality and variety, taking content to a whole new level with the network’s high speeds and low latency.

According to KT Economics and Management Research Institute, VR consumes at least four times as much data as normal videos and to avoid motion blur in the virtual world, low latency is crucial. Like how sharing and downloading videos was possible on 3G but improved dramatically on 4G, carriers are expecting 5G to speed up the expansion of VR and AR.

With 5G already commercialized in Korea, two reporters from the Korea JoongAng Daily tried out the “5GX VR for oksusu” service offered by SK Telecom on Thursday to watch baseball games in the virtual world and see if VR content is really what it is promised to be - the perfect solution for sports fans and concert lovers who don’t have time to make it to live events. The reporters used Samsung Gear VR head-mounted devices and Samsung Galaxy S10 5G smartphones for the trial.

The plan was to meet up in a VR common room at 6:30 p.m., just in time to watch the Doosan Bears take on the Kia Tigers at Jamsil Baseball Stadium in southern Seoul.

Unfortunately, the virtual world turned out to be far more elusive than originally expected.

VR, as it turns out, is far from just plug-and-play. The three simple steps involved in setting up the devices - download the VR app, put the phone in the headset, link and calibrate the controller - turned out to be anything but simple, and it was past 8:00 p.m. before anybody got to watch any baseball.

Even experienced VR users ought to be aware that if they’ve never set up a system themselves, it could take some time. Our experience with VR was generally at events or press briefings where the setup has already been taken care of.

After more than an hour of downloading the VR app, downloading the oksusu app, setting up the gear and creating the necessary accounts, it was finally time to watch some baseball.

The app allows up to eight users to meet in a virtual room to watch sports games, concerts and even home shopping channels together. Each participant appears as an avatar. The virtual room can be designed in a number of ways, including as a normal living room, movie theater and concert hall. Participants can communicate both in their voice and text chats.

Though more than an hour late, we started by watching the game between Doosan and Kia.

The virtual room that we chose to use had about six sofas lined up in two rows with a huge cinema-sized TV screen showing the game. Aside from the fact that we were poorly-designed avatars (our fault, not SK Telecom’s) sitting on white sofas in a cavernous virtual living room, the TV-watching experience was actually pretty normal.

After a while, it became apparent that the avatars could pick up the things in the room. Popcorn, tankards of beer, Korean flags and light sticks were arranged on tables between the sofas and could be picked up using the VR controllers. Especially irate sports fans could even throw the items at the screen.

After about 10 minutes, we were too busy throwing food and talking to each other to watch much of the game. Even the most avid sports fan struggles to stay focused on a 2-D video feed when in a virtual room full of distractions.

Avatars could change seats and the virtual view of the screen shifted depending on where the avatar sat in the room.

Apart from throwing food, avatars could also emit emoticons. Avatars that are sat together could feasibly communicate by just firing emoticons at each other as if they were really communicating in the virtual space.

Though the graphics weren’t perfectly seamless, the experience showed that a bit of refurbishing could make virtual dating or virtual meet-ups a reality in the near future. Surprisingly, it felt like we were looking at each other when communicating as avatars. Even if they can’t go to a baseball stadium together, it’s conceivable that friends and couples could still get some satisfaction from watching games together in avatar form.

The baseball experience improved when we visited a room broadcasting the game between the SK Wyverns and Hanwha Eagles.

As the app was made by SK Telecom, SK Wyverns games are broadcast differently. The screen in this room was much bigger - too big maybe, as it was almost impossible to actually focus on the action - and the room offered a 360-degree view of a baseball stadium. A scoreboard was visible throughout the game on top of the huge screen and the batting lineup for each time was visible to either side.

For a truly immersive experience, the app should be updated so that clicking on the names of the players in the batting lineup gives more information and stats. Currently, that function is lacking and nothing relating to the game can be interacted with.

As well as being difficult to see everything that was going on with the massive screen, the video quality was also noticeably lower than in the other rooms, at times making it almost impossible to see the baseball.

However, for people who are more interested in the social aspects of going to a ball game, the VR solution may still work. The quality of the baseball experience may be lacking, but it could still be a fun place to hang out and chat with friends with the baseball in the background. Of course, you’ll have to settle for a virtual beer.

Thankfully, the VR headset wasn’t as uncomfortable as expected. Even after wearing it for about an hour and a half, the device didn’t feel too heavy and removing it didn’t make us dizzy or disorientated. It did seem to tire the eyes, but that could also be because by the time we took it off, it was about 10:00 p.m.

About 2.77 gigabytes of data were consumed using 5GX VR for oksusu for an hour and a half. The data usage is actually not bad considering some voice call apps on the market can consume 6 to 7 gigabytes of data per hour. Still, for cheap 5G data plan users the data consumption could be a big burden. Only about 8 to 9 gigabytes of data is offered on the budget 55,000 won ($47) plans from Korea’s three mobile carriers.