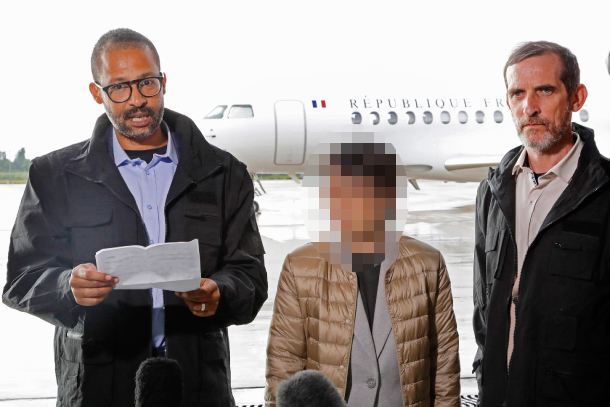 A Korean woman in her 40s was among four rescued from captivity in Burkina Faso on Friday in a daring raid by French special forces that cost the lives of two commandos.

The freed hostages were two French citizens, one American and the Korean woman. They were kidnapped and held for 28 days by a militant group in the West African country before a special forces team sent by the French government conducted a raid to rescue them.

After tracking the militants to a camp in the desert of eastern Burkina Faso, on the border with Mali, the elite Commando Hubert unit of the French naval forces received an order from Paris to carry out a nighttime raid to retrieve the hostages, though they did not know that the Korean and American women were also held in captivity.

In the “highly complex operation” that ensued, according to French Defense Minister Florence Parly, two soldiers — Cédric de Pierrepont and Alain Bertoncello — were killed in action, though the hostages were safely freed.

French President Emmanuel Macron on Sunday greeted the two French citizens and Korean woman at a military airport near Paris, along with Korean Ambassador to France Choi Jong-moon, who extended Korean President Moon Jae-in's gratitude and condolences to Macron for the two soldiers who died during the raid.

According to an official at Seoul's Foreign Ministry, the Korean woman is receiving medical attention in France but appears to be healthy. She has spoken to her family in Korea in phone, the official said.

The official said there were no reports of missing Korean citizens in Burkina Faso or Benin in recent days, and the Foreign Ministry only found out the woman had been taken hostage after the French government said she and the American were among the hostages.

The official added that the woman had apparently departed alone for a trip to Africa almost a year ago and had not contacted her family in Korea since then. She apparently met a female American traveler recently, and together they boarded a bus to an unidentified location when they were taken hostage by the armed group.

The two French citizens were reportedly traveling in nearby Benin at the Pendjari National Park — a popular tourist destination — when they were captured on May 1.

Parly said that the intelligence Paris obtained with the help of the United States suggested the militants were going to take the hostages across the border into Mali, where they would likely be handed over to the Macina Liberation Front, a major militant Islamist group in the region linked to al Qaeda.

“France's message to terrorists is clear,” the minister said, according to the outlet France 24. “Those who want to attack France, the French, should know that we will hunt them, we will find them, and we will kill them.”

Since 2014, France has had partnerships with five West African countries — all former French colonies — to combat insurgents in the Sahel region, and maintains a roughly 4,500-strong military presence there as part of a counter-terrorism network known as Operation Barkhane.

The Korean government currently advises its citizens against traveling to Burkina Faso, and designates its northern regions with a “red” travel warning.