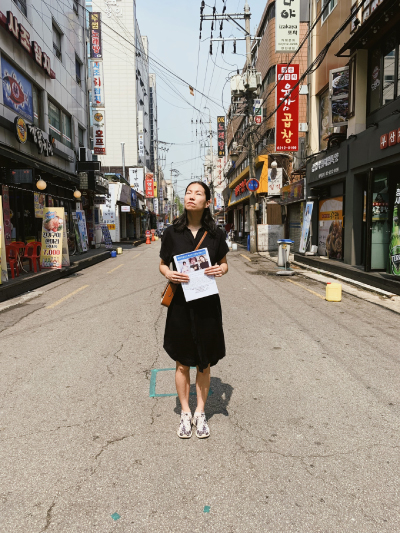 Hyshil Sander, a 36-year-old who was adopted by a family in the Netherlands when she was 3 months old, is back in Korea to find her birth mother, who lived in Jangan-dong, Dongdaemun District, eastern Seoul. Sander said she intends to visit Korea every year to search for her birth mother herself. [HYSHIL SANDER]

Hyshil Sander was born Moon Hye-shil in Korea, but was adopted by a family in the Netherlands when she was 3 months old. She is one out of over a thousand adoptees looking for their birth parents in Korea.

“I am searching for my mother because I would like to tell her that everything is OK and her decision worked out,” Sander, 36, told the JoongAng Ilbo. “I am healthy, happy and a strong woman. I would very much like to know her [and my father], see what she looks like and of course find my [twin] sibling.

“If she reads this I want her to know that I am not angry with her, I only have love for her,” she added. “I will come back to Korea every year until I find her and my sibling.”

Sander visited Seoul last month in search of her birth mother, Moon Jeong-hee, who is estimated to be between 62 and 65 years old. She roamed the streets in Jangan-dong, Dongdaemun District, eastern Seoul, with flyers she made to ask the locals if they know the whereabouts of her mother. Jangan-dong is where Moon gave birth to Sander in 1983, according to documents Sander obtained from her Korean adoption agency.

“In the past 36 years I had a wonderful life. I went to school and became an artist as well as a teacher at one of the universities of Amsterdam,” she said. “My adoptive parents are wonderful, and they would also like to know where I am from and meet my mother.”

Sander is one of 1,607 adoptees who have requested information about their birth parents from the Korea Adoption Services last year. There were only 89 successful cases.

“I responded immediately requesting for details and additional paperwork, like my relinquishment form provided by my birth parents at the time of my adoption,” she said. “Instead of the papers, I was given more specific details about my adoption story. My Korean adoption agency said that I was born in Sacheon, [South Gyeongsang], and was relinquished by my birth mother who was unmarried at age 32. I had my parents’ names and ages, and that was all.”

After speaking with other adoptees, Collins said she learned the best way to find her birth parents would be to visit Korea herself.

“I then applied to GOA’L’s [Global Overseas Adoptees’ Link] First Trip Home for, 2018 and was accepted a few months after my submission,” she said. “This was my first trip to Korea since my adoption.”

GOA’L - an organization in Korea run by adoptees since 1998 - runs programs to help adoptees visit Korea to find their birth parents.

Collins found her parents by visiting a local community center in the town where she was born.

“A recently retired employee knew the name of my birth father, where we reunited in my uncle’s auto shop,” she said. “I was embraced with love by a large family: my mother and father [still married], three elder sisters, an elder brother, three paternal uncles, and six nieces and nephews.”

But not everyone is as lucky with their search. One of the problems is the lack of records held by the adoption agencies, as well as false records.

“In the adoption file, we know that not everything is true, so my job is to find the part of truth,” said Damien Terisse, who was adopted from Korea to France and has been helping other adoptees locate their birth parents at GOA’L. “Sometimes they wipe out the parent’s name or address.”

This was also the case for Sander.

“My file in the Netherlands said I was an abandoned baby and both parents were unknown, which is not true,” she said.

After coming to Korea via GOA’L’s program, Sander found her mother’s story.

“With help from GOA’L, I asked for all the [correct] documents. The birth certificate said I was born as the second child of a twin,” she said. “The documents say she called the clinic a few times, worried and saying that if she would not return they were allowed to give the baby up for adoption. She signed a hand-written paper by the clinic to relinquish me with her fingerprint … Three months later I was on a flight to the Netherlands, where I grew up.”

“The problem is, I never knew about this story [about my mother] until I was 34 years old and came back to Korea for the first time,” she said.

GOA’L suggested that adoptees let individual adoption agencies know that they want to be contacted if their birth parents inquire about them.

“One thing that I think adoptees need to know is that they can allow the agency to contact them if their birth family wants to make contact,” said Richard Peterson, secretary general of GOA’L. “But no one tells them that. There’s actually an authorization piece of paper that you can fill out that says if my birth family contacts me, I will allow the agency to contact me.”

Another option adoptees have to search for their birth parents in Korea is DNA testing.

“The DNA of the adoptee can be collected by the authorities, who will cooperate with the National Forensic Service to try to locate their parents,” said Lee Sung-chul, head of a team at Seodaemun Police Precinct that deals with searching for missing people.

The precinct, using this method, once located the parent of a woman who was adopted to the United States when she was young.

The Korean Consulate General in Los Angeles, after hearing the news, helped three adoptees submit their DNA files to the precinct in Seodaemun to try to search for their birth parents.

“Finding one’s birth parent can be a big emotional experience, and it is hard to predict what will happen after one finds one’s birth parent,” said Kim Do-hyun, a pastor who runs a guest house in Seoul for adoptees visiting Korea to search for their family. “We try to support them for their emotional and psychological needs during the process.”

Some adoptees have faced expulsion from their adopted countries and other harrowing experiences, including Adam Crapser, who was deported to Korea at age 41 after growing up in the United States.

“The work to help the adoptees find their birth parents is important, but we need to work on addressing the situations that some parents face that leads them to make the decision to give up their children for adoption,” Kim said. “For example, we need more programs to support single parents and other families trying to raise their children through economically unstable environments.”