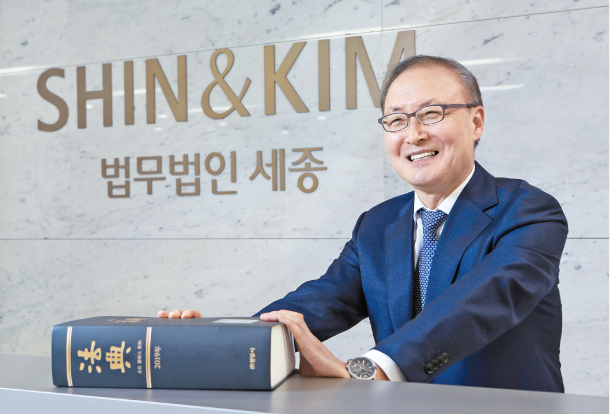 Very few things can make a law firm stand out in South Korea’s highly competitive legal market. But when it comes to pro bono activities, Shin & Kim has one specialty it is very proud of: its ardent support for North Korean defectors.

From providing free legal consulting services and scholarships to cohosting an English speech contest, Shin & Kim sets itself apart from other major law firms in Seoul by zeroing in on what North Korean defectors need, and then coming up with programs that concretely address those needs.

Upon realizing that many female North Korean defectors don’t know much about sexual abuse, Shin & Kim is now preparing an educational course on the basics, and ways to prevent abuse from happening to them.

Those efforts fall in line with the law firm’s core values of integrity and excellence.

Kim Doo-sik, the managing partner of Shin & Kim, hopes to spread that spirit across borders as the law firm he cofounded in 1981 enters various new markets in Asia following a successful streak here at home.

The Korea JoongAng Daily recently sat down with Kim in his office in Jongno District, central Seoul, to hear about Shin & Kim’s globalization strategy and what new foreign offices it currently has in mind.

A. We opened our Beijing office in 2006 and our Shanghai office in 2010. In Vietnam, our office in Ho Chi Minh City opened in 2017 and the one in Hanoi opened in 2018. So in total, we currently have four offices abroad and plan to establish new ones in Indonesia, Cambodia and Myanmar.

In just two years after entering the Vietnamese market, Shin & Kim has managed to provide legal services in almost all major areas including mergers and acquisitions (M&A), finance and real estate. Our two offices in Vietnam have 18 professional members combined, including four Korean lawyers, five Vietnamese lawyers, one U.S. lawyer and an expert on customs duties.

Partner Gil Yeong-min, currently leading our Ho Chi Minh City office, is a seasoned lawyer with more than 10 years of experience in M&As and real estate. Partner Park Young-su, head of our Hanoi branch, is one of few Korean lawyers who have lived several years in Hanoi and Ho Chi Minh City serving clients in various areas. Before joining Shin & Kim, Park worked as a legal adviser for the Korean Embassy in Vietnam and the Hanoi Trade Office of the Korea Trade-Investment Promotion Agency (Kotra). Among various roles, he now serves as a legal adviser for Kotra’s Ho Chi Minh City Trade Office and the Korea-Vietnam Free Trade Agreement Support Center.

Ever since Korean companies rushed into the Chinese market more than a decade ago, Shin & Kim has helped Korean businesspeople establish and operate branches in China. Many Korean companies are now exiting China due to changes in the business environment, but we believe they’ll return to knock on China’s door again.

What is Shin & Kim’s biggest accomplishment in Vietnam?

Shin & Kim was the lead transactional legal counsel for the Korean company CJ Logistics for its acquisition of a majority stake in two shipping and logistics subsidiaries under the Vietnamese logistics company, Gemadept Corporation. The entire process took more than four years from 2013 to 2017, and we advised CJ Logistics from 2015 to the end.

I like to call it “semi-globalism.” No Korean law firm has thousands of attorneys like some major law firms in the United States or Britain do, so it actually doesn’t make sense for Korean law firms to aim for the same globalization goal as they do - which is why Shin & Kim focuses more on Asia, such as the Southeast Asia region or Russia’s Far East, rather than eyeing the entire global scale.

Then how is Shin & Kim’s semi-globalization strategy different from that of other major Korean law firms?

Let’s take Vietnam for an example. I think the reason we were able to grow so fast in such a short time there was that we sent our best partners, experienced lawyers who were really eager to travel to Vietnam and take on a new challenge. We have some pretty strong local staff there as well, and their teamwork with the Korean lawyers is amazing.

A while ago, we invited the Vietnamese lawyers working in our Ho Chi Minh City and Hanoi offices to Seoul and gave them a tour around our headquarters and the capital city. What’s important for us is to make them feel part of the Shin & Kim family, which translates into even better teamwork with the Korean staff once they return to their offices in Vietnam.

What about North Korea? Is there a legal team for that?

We have a North Korea team, but the problem is that the team barely has any work to do these days due to stalemated denuclearization talks between Pyongyang and Washington. We hoped the second summit in Hanoi would turn out well, but unfortunately, it didn’t. We’re thinking about changing the team’s name to something like “Northern Economy,” and have the North Korea team join forces with our Russia team, so they can handle both regions.

I think it’s impossible to separate inter-Korean economic cooperation with economic cooperation between South Korea and the Russian Far East because any infrastructure project between the two Koreas, such as the linkage of railways, will ultimately spread into Russia’s Far East. People talk a lot about investing in North Korea but there’s really nothing much to talk about because the North has a weak legal investment system - if there is any - and it can change at any time. Plus, it can be really exhausting for lawyers to research something that won’t happen right away, so I think it’s appropriate to combine the North Korea team with the Russia team, since Russia has a bit more work to do right this instant.

What were some achievements of Shin & Kim’s North Korea team in the past?

The North-South Korea Relations Team served as a legal adviser for Korean companies in investments and disputes related to the Kaesong Industrial Complex, Mount Kumgang tours and the Rajin-Khasan logistics project linking North Korea and Russia. Particularly for the Rajin-Khasan project, Shin & Kim was the sole legal adviser for Korean companies. In preparation for the future, the team is now going over practical issues that are expected to arise when the Kaesong Industrial Complex and Mount Kumgang tour programs resume. The team is also communicating with companies interested in railway and road businesses in North Korea and conducting research on potential mine-related business projects that could be carried out in association with SOC [social overhead capital] projects in the North.

We opened an office in Pangyo, Gyeonggi, on June 18, 2018, to provide legal services to Korean and foreign IT companies and start-ups on investment, regulation, labor, intellectual property and other services related to the fourth industrial revolution. I think a lot of our younger lawyers are showing a keen interest in these areas. Nowadays, we’re also placing heavy emphasis on regulations, especially how Korean companies should respond to strengthening regulations from the government.

Shin & Kim offers a lot of pro bono services for North Korean defectors. Can you mention a few?

We provide some defectors with scholarships, help them with studies and teach them the basics of South Korea’s legal system. We’re also co-hosts of an English speech contest for North Korean defectors, and we help contenders with their English speeches during the preparation period. To help defectors lead independent lives, Shin & Kim organizes a start-up idea contest and offers winners prize money, too.

Why is it so important for Shin & Kim to help defectors?

As inter-Korean ties improve, North Korean defectors and their human rights issue will grow more important, which is why we’re trying to help them settle into a new society early on. Aside from North Korean defectors, our law firm also tries to provide legal assistance to multiethnic families.