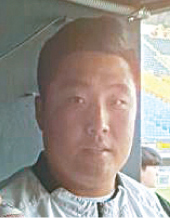 Before Sunday, any fans who had heard of Lee, formerly called Lee Young-jae, likely only knew him as the nephew of Song Jin-woo, the most successful pitcher the KBO has ever produced. Song, now the Hanwha Eagles’ pitching coach, still holds the record for the most number of career wins, at 200.

Although Lee was drafted by the Twins during the second round of the 2011 KBO Rookie Draft, it wasn’t until 2016 that he made his KBO debut. Having played in one game in 2016 and three games in 2018, Lee has finally started to prove that he deserves a spot on the Twins roster this season. In 15 games, Lee has picked up a win and two holds with a 2.96 ERA.

Having mostly pitched in the bullpen, Lee was given a chance to get on the mound as starter against the Eagles on Sunday. This was the first time since May 29, 2016, that Lee got to start in a game in the KBO.

The pressure was on this time around, as Lee started against his uncle’s team. He tossed five scoreless innings, giving up a hit and two walks, while striking out two in 79 pitches.

“I didn’t expect to be the winning pitcher,” Lee said after the game. “I just tried to get through one inning at a time and I think that led me to a good result.”

“I still have a long way to go because it’s only the beginning of the season. I’ll focus more in the remaining season.”

By finishing the weekend with a 2-0 win, the Twins took the winning series against the Eagles and are now ranked third in the KBO standing, at 24 wins and 17 losses.

Over the weekend, the Doosan Bears also redeemed themselves by winning their series 2-1 against the NC Dinos. Now the two teams’ head-to-head record for the season is tied at three wins and three losses.

As the SK Wyverns swept their weekend series against the Kia Tigers, they are now one full game ahead of the Bears in the table, while the Tigers once again dropped to the bottom of the standing, at 13 wins and 27 losses.

The KT Wiz, considered the weakest in the league, ended the Kiwoom Heroes’ nine-series winning streak. As the Wiz defeated the Heroes 9-3 at home on Sunday, they won the series at 2-1 and are now ninth, while the Heroes are fourth.

Over in Daegu, the Lotte Giants had a thrilling 10-9 come-from-behind victory on Sunday to take the series against the Samsung Lions.