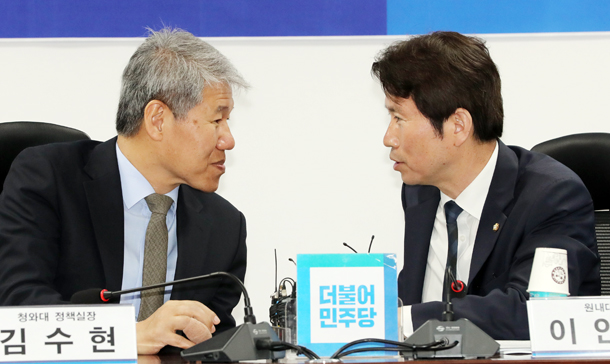 The term lame duck also comes from the stock market. In the London Stock Exchange, the term referred to a broker who defaulted on his debt. Writer Horace Walpole first used the term in a letter to Sir Horace Mann in 1761.

In political terms, it was first used during the Civil War in the United States, referring to the reduced political power of elected officials at the end of their terms. Their inconsistent — and weakened — policies were compared to a lame duck. Abraham Lincoln was elected president in November 1860, but James Buchanan’s term was not over until March the next year. As seven states seceded from the union, it led to the Civil War (1861-65).

The term “lame duck” is getting attention because of the conversation between Blue House policy advisor Kim Soo-hyun and Democratic Party floor leader Rep. Lee In-young on May 10 at a meeting in the National Assembly. On a bus strike scheduled for May 15, Lee said, “Bureaucrats act absurdly when they get a chance.” Expressing his disgruntlement about career bureaucrats who don’t move as the administration orders. Kim responded, “It feels like the fourth year into the administration, not the second.”

They were criticizing the apathetic nature of the bureaucrats. Yet Party for Democracy and Peace lawmaker Rep. Park Ji-won said, “They are admitting their lame duck situation.” On top of blaming the former administration, opposition parties and the media, they seem to have fallen into a self-imposed lame duck period. I hope they don’t become a “dead duck” after exhausting themselves attacking others, including bureaucrats.