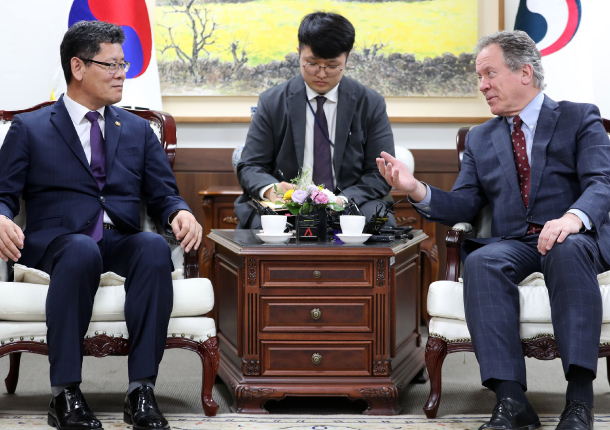 David Beasley, executive director of the World Food Programme (WFP), right, talks with Unification Minister Kim Yeon-chul, left, on Monday at the Central Government Complex in Seoul as South Korea prepares to provide the North with food aid. Beasley told reporters following the meeting that he was “very concerned” about food shortages in North Korea and stressed that the regime was in need of donations. A joint report published by the WFP and the Food and Agriculture Organization last month said the North’s crop output plummeted last year to its lowest level since 2008, with an estimated 10 million people - about 40 percent of its population - in urgent need of food. [NEWS1]

David Beasley, the executive director of the World Food Programme (WFP), said that the United Nations (UN) organization has “systems in place” to assure that food aid gets to its intended beneficiaries after discussing the details of providing assistance to North Korea with Seoul officials on Monday.

Beasley told reporters in Seoul after his talks with Korean ministers, “Every country’s got to make their own decisions, but we just had a frank discussion about what we see as the food security situation, the assessment and the time frame.” He pointed out, in terms of the time frame, that the “harvesting season and a lot of different issues” come into play, as well as “how long it takes for us to get the food aid” into North Korea.

“As you know, high on our agenda is the North Korean food situation, and we’ve been having some internal discussions,” Kang told Beasley during their talks.

Her comments come as Seoul has been facing a dilemma over the details of providing food assistance to the North, including the method, such as whether it be sent through an international organization or through the government, as well as the timeline and monitoring system.

Kang noted a recent report by the WFP and the Food and Agriculture Organization (FAO) that found that North Korea this year faced its worst harvest in 10 years due to dry spells, heat waves and flooding, and that over 10 million people, or 40 percent of the population, suffer from severe food shortages.

Beasley’s trip to Seoul comes days after a visit by Stephen Biegun, the U.S. special representative for North Korea, last week. The issue of food assistance was expected to be discussed in detail during working group talks on the North Korea denuclearization issue and meetings with senior Seoul officials.

Beasley told reporters that the South’s method of food assistance to the North was a “decision every country has to make, whether that’s bilateral or multilateral.”

But he added that the WFP is “the best of the best at delivering assistance in the most complex environments,” citing “longstanding operating experience inside North Korea for a long time.”

He continued, “We know a lot of the pitfalls, and so we believe that we can put the systems in place to assure the taxpayers of any nation that the intended beneficiaries are reached.”

There has been some concern that direct food assistance by the South Korean government to the North may not reach the intended target - the people - and may instead support its military.

“Every country’s got to make its own decision about what they’re going to do,” said Beasley. “We’ll leave that up to the leaders of this country.”

But he continued, “We’ve assured any and everybody involved that we’ll put the monitoring systems in place to assure that the intended beneficiaries receive the assistance they require.”

On Seoul’s role in providing food assistance, Beasley said, “The ball is in a lot of different courts around, but I know from my heart that the leadership of this country are very concerned about the innocent people who suffer.”

In 2017, the South Korean government allocated $8 million for aid to the North through the WFP and the UN Children’s Fund, although it was never implemented.

South Korean President Moon Jae-in and U.S. President Donald Trump during their summit last month agreed on the need for humanitarian food assistance to the North.

Following the North’s firing of short-range projectiles on May 4 and short-range missiles Thursday, Moon on a televised interview Friday said that food assistance may be used as a means to create a breakthrough in the stalled denuclearization dialogue, noting that this was backed by Trump.

Moon said Seoul needs to use inter-Korean cooperation funds to send the assistance, which requires the National Assembly’s approval.

Yet he also acknowledged that the government will need to seek public consensus after the latest missile launch by the North.