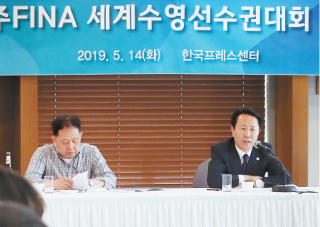 The Korean organizers for the upcoming FINA World Aquatics Championships said Tuesday they are gearing up preparations to host the sporting event in the southwestern city of Gwangju.

“Preparations for the event’s facilities and other operational issues are well on track,” Cho Young-teck, director general of the organizing committee of the Gwangju Championships, said in a press briefing in Seoul. “We are now making final touches.”

The biennial World Championships will be held in Gwangju, 330 kilometers (205 miles) south of Seoul, and Yeosu, South Jeolla, from July 12 to 28, under the theme of “Dive into Peace.” It will be the 18th edition of the world swimming body’s signature event and the first to take place in Korea.